There is a scale when it comes to the mission-based slaying RPG subgenre. On one end is Monster Hunter, a series that focuses entirely on the large creatures and how to best defeat them, with little care for providing a narrative. On the other end, series like God(s) Eater and Toukiden have themselves distinct by spreading some of the focus onto the setting and plot. Freedom Wars is a title very much in the vein of that latter category, particularly God Eater, which is unsurprising considering the heavy contribution from developer Shift, and it does what it sets out to do with great aplomb.

Freedom Wars is set one hundred thousand years in future, where mankind now lives in giant city-state structures called Panopticons in order to make best use of the limited remaining resources on the planet. Their denizens are split into two categories: sinners and citizens. Sinners, the customised player-character, work as the muscle, gathering resources or fighting to protect their Panopticon and its citizens, who provide the technical knowledge that keeps the Panopticon running. While citizens have nearly full freedoms, sinners find themselves working off a pre-emptive million-year sentence of servitude, which is reduced by undertaking missions or donating resources for the Panopticon, but can also be added to for actions contrary to “the Greater Good”. Despite the harsh situation, humanity still isn’t fully cooperative. Panopticons will frequently launch assaults on others, trying to capture citizens using giant robots called Abductors.

Things start off with the player character being injured whilst engaged in battle against another Panopticon, resulting in total memory loss. Unfortunately, this is considered one of the most careless wastes of resources possible, and all previous progress towards freedom is reset with a fresh million-year sentence and the removal of all previously-earned rights. The Panopticon at least lets players order a new customised Accessory, a robotic companion that will assist the sinner in missions in addition to keeping an eye on them for potential transgressions, of which there are many. 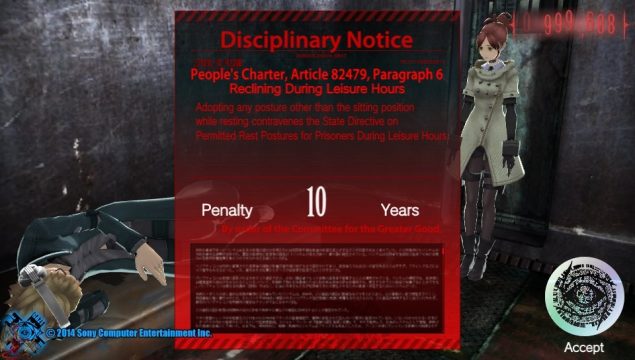 Expect to be unfairly treated early on.

The story of Freedom Wars story is interesting and takes a larger presence than other titles in the subgenre. The game does a great job introducing the setting initially, but is also very adept at steadily feeding the player more information about the world as it becomes appropriate to the story. The writing and localisation is meritable, doing a nice job of keeping the player-character as an integral part of the story despite their often limited contributions to conversations and involving a solid group of engaging characters. It’s far from perfect, however, although the good quality of the story content itself alleviates the issues quite a bit. One downside is the squandering of the million-year sentence and how the player’s efforts to reduce it are largely made irrelevant. The story can be easily finished with 900,000 years still left. The ending also leaves much to be desired in terms of wrapping things up, even including the few unlockable post-credits scenes, leaving many questions open for a likely sequel or enhanced release that is almost ubiquitous with this particular style of game.

The game is divided up into chapters based on the player’s CODE level, a higher level bestowing more rights while also unlocking tougher missions. Each CODE level generally features around five to seven mandatory missions, plus a few more optional ones. It is quite easy to get through the game without having to repeat any missions, although many will do so anyway to earn crafting items. Some story scenes are prefaced with sections where players will have to sneak through some passageways to avoid detection, which provide a bit of variation to the process but are almost trivial. On the whole, the game does a great job of providing the feeling of progression, with mission difficulty increasing at a pace that matches nicely with most players’ growing skills and equipment power. There’s plenty to do in the post-game as well, with a good number of even tougher encounters unlocked after the thirty to thirty-five hour main storyline.

A decent number of mission types and objectives appear in the game, such as rescuing citizens, defeating certain Abductors, or capturing strategic points. The player-character and their Accessory will usually be joined by up to three other sinners with their Accessories. The variation in missions, combined with the high-paced action, works well in preventing the game from ever feeling too repetitive while advancing through the ranks, even when going back to earlier missions to gather crafting components. Each mission has a pretty relaxed mission timer, but of more pressing concern is usually the number of respawns available. Players can be revived by others at no cost to this limit, however, as long as it is done within a certain (fairly short) time, so ensuring that allies are never too far away can be an important consideration. 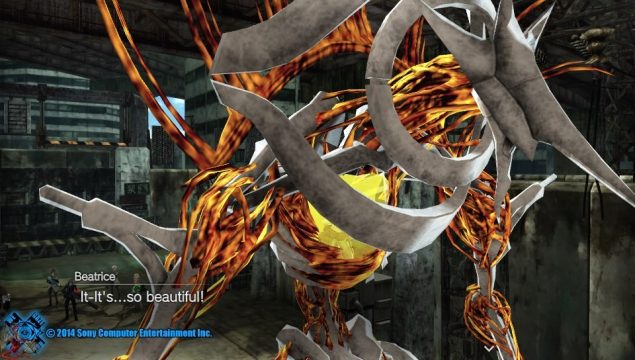 A few missions will only feature the standard ground forces of other Panopticons, but it’s the fights against the Abductors where Freedom Wars really shines. There are a number of different models of Abductor, and these will often have different weaponry or other threatening parts that players can remove before focusing on their destruction. In addition to the large assortment of melee and ranged weapons, players can use their Thorn to drag down enemies or to latch onto them to try and saw off various parts. Sinners are able to quickly switch between two weapons they equip before the mission, although Accessories are limited to a single weapon. There are plenty of potential ways to take down enemy Abductors, and there’s a lot of fun to be had trying out new tactics and weaponry.

The game’s controls are quite easy adjust to with the standards options to sprint, dodge, and attack being rather straightforward. The ability to switch between a locked-on camera and free camera is welcome and works well. That said, the camera view can get stuck in rare enclosed areas, and the order in which enemy lock switches takes a little getting used to because it moves on a pre-determined order rather than the relative position of the enemy. Giving basic orders to the Accessory or AI party members is easily done via the touch screen, and switching between weapons and items is also quick and simple to do. The battles are excellent fun to be involved in, and the system is more than able to create a great action RPG on its own.

While clothing is purely an aesthetic consideration, weaponry is always an important area to look at upgrading whenever possible. Weapons are divided into different damage types as well as their categories, with a standard rock-paper-scissors elemental system also coming into play towards the latter stages. There is a lot to be done with the game’s crafting system, and many players will easily get sucked in trying to upgrade their weapons to be the best possible. Certain stats and effects can be at the mercy of a random generator, which makes achieving the perfect weapon difficult, but most won’t find the differences noticeable. If a player leaves their Accessory knocked out for too long then an Abductor can kidnap it, requiring the player to rescue them within a few minutes. Failing this task causes the Accessory to be lost and players must either wait until the Panopticon retrieves it, using an inferior spare in the meantime or undertake a special rescue mission themselves. 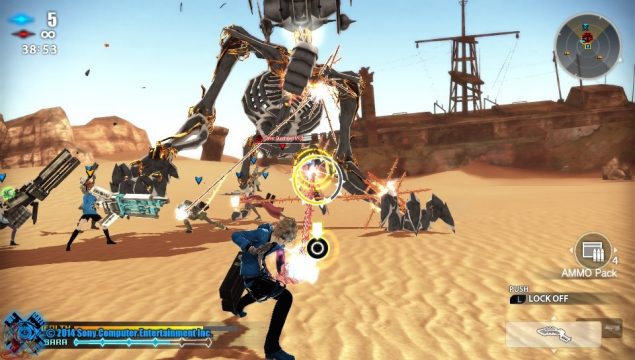 Encounters with Abductors are always a bit Thorny.

Freedom Wars has a good online experience. Players can set up public or private rooms of up to four other players, where they can go on any of the missions found in the single-player mode. If a player has not completed or unlocked that mission yet, they will be rewarded with a special item upon completion that guarantees success once that mission is reached in the story mode. There is also the option for competitive play, with two teams of four going head-to-head in invasions of other Panopticons. Online is certainly helpful for some of the tougher missions where the AI characters can get overwhelmed. It’s easy enough to get into and solid throughout.

Freedom Wars‘ visuals work very nicely on the Vita with the expertise of Sony’s own Japan Studio likely contributing to the impressive polish and level of detail. The cost of this visual quality, however, is that the loading times are a fair bit longer than ideal. Location designs are generally impressive, providing some excellent views of the post-apocalyptic nature of the world. That said, parts of the Panopticon can be a bit lifeless, perhaps by design, and the map variety is a bit lacking. There are an acceptable number of distinct, animal-based designs, although palette-swapping is used quite a bit later on and some types don’t even make an appearance until the post-game. More varied or original designs for Abductors, as well as more types of enemy grunts, would’ve been appreciated.

The game comes with Japanese voice-overs only, which while the performances are perfectly fine, it is a little disappointing not having an English option. There’s a lot of chatter between characters in missions, along with PA announcements within the Panopticons, and it’s a shame that players will be missing out what is being said. Kemmei Adachi’s soundtrack is an excellent fit for the title, the mostly-electronic tracks blend in superbly with the game’s setting, on top of being an almost perfect accompaniment for the combative action of a team fighting against giant robots.

The lack of Monster Hunter on the Vita has been a frequently pointed to as a disappointment. While Freedom Wars doesn’t work as an exact replacement for it, the game does help fill the gap as well as possible. Despite having some areas that need improvement, Freedom Wars is very easy to sink many hours into and is a thoroughly engaging handheld experience all-round. Complaints that the Vita has very few great games of interest have rightfully been met with scorn, and Freedom Wars is a strong addition to the system’s library. 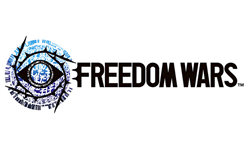