The original Fossil Fighters did a fine job of addicting players to the task of unearthing prehistoric creatures to do battle in obvious but effective emulation of Pokémon. The game may not have set the sales charts afire, but that didn’t stop Red Entertainment from crafting a sequel, which may become the final RPG Nintendo publishes for the DS in North America. Fossil Fighters: Champions follows the first game very closely, adding a few small items but keeping the framework that proved effective. Those seeking deep combat or story mechanics will not find them here, but the addictive nature of trying to fill a complete library of prehistoric pugilists will win over quite a few.

The process of acquiring the creatures from a bygone age takes up quite a bit of time, but its addictive nature makes the job worthwhile. The first step is finding the fossils in which these extinct animals’ remains reside. Some of them can be purchased in shops or obtained as rewards for quests, but most simply need the player to wander around the many areas within the game where fossils are easily unearthed with a little digging in the right spot. A handy sonar is provided to showcase exactly where these spots are, and raking in the fossils is quick and easy.

Once some fossils have been gathered, the job of cleaning them can begin. Using a hammer for pounding and a drill for more sensitive parts, scraping all the eons’ worth of accumulated dirt off of the fossils must be done before they can be used. The twin catches of this process are a ninety-second time limit and the inherent fragility of an exposed fossil, which can make a rush job injurious to the specimen. The time limit can be irritating, but most of the time it’s fortunately not a major issue. The use of the DS touch screen for the cleaning is quite enjoyable, and dusting a dozen or more fossils in one sustained session becomes commonplace due to the addictiveness of the procedure. The developers were thoughtful enough to make the accumulated dirt come in many shapes and densities, ensuring that every cleaning is not the same.

Champions adds a few elements to the cleaning. Now gigantic fossils that take up more than the screen can display will be found, and the cleaning of these requires manually moving the viewpoint. Consumable items can now be purchased to aid dirt removal, one of which will add thirty seconds to the timer while the other will identify any break points to instantly smash open a large chunk of the fossil. These are very handy in dealing with certain stubborn specimens, but expensive enough to prohibit overuse until quite a while into the game. The additions don’t fundamentally change the fossil-cleaning mechanics of the first game, but they do spice it up a bit for veterans. 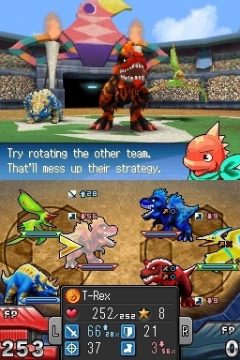 A fish and a triceratops walk into a sportscasting booth and start commenting….

Most revived species, dubbed vivosaurs by the game, come in four separate fossils with different parts of the skeleton. Getting the head is mandatory to revive a creature, while the other parts serve to make it considerably stronger. Many vivosaurs return from the original game, but quite a few of the new species make it clear that dinosaurs are not the only prehistoric fauna group represented. Plenty of ancient mollusks will be unearthed, along with a few types of mammoth. Getting bored of the options available for combat will not be a problem.

Fossil Fighters: Champions‘ title makes it clear that battles will occur, and they proceed in an intuitive way that owes almost everything to the first game. Three of the player’s species are pitted against three of the enemy’s in a turn-based melee. Each species has unique abilities, and a four-point elemental system that determines strengths and weaknesses is in effect, but the result is not something that will require intense tactical analysis from the player. It’s quick and easy to understand, while those who wish to delve into competitive play can achieve quite a bit.

The story battles are unlikely to cause much frustration to all but the most easily flummoxed. Computer opponents often have strong resources but don’t use them intelligently, allowing the player to triumph without excess effort. Unlike the first game, vivosaurs can be leveled with no real limit, allowing a team of incredibly powerful behemoths to be created with a little patience. The last battles in the story mode are more challenging than those that came before, but any RPG veteran won’t have problems.

When it comes to plot, Fossil Fighters: Champions errs on the side of silliness. Its beginning is stereotypical enough, with the player’s avatar and a friend named Todd being pursued by a rage-filled allosaurus through the jungle until salvation arrives in the form of Joe Wildwest, the best-known vivosaur handler the world over. Two years later Joe hosts a gigantic tournament, interrupted repeatedly by some not-particularly-threatening antagonists known as the BareBones Brigade. 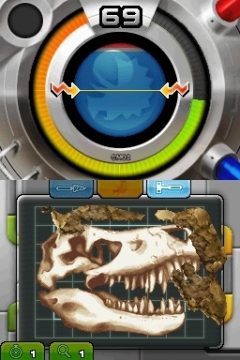 Someone got lucky, clearing that much debris in 21 seconds is just about impossible otherwise.

The story makes few pretenses of being serious, and takes plentiful detours into fun little side missions. Its broad strokes contain painfully overdone clichés such as a young boy learning the Power of Friendship and a young girl learning to Believe in Herself, so the frivolity achieved by moments such as a malfunctioning robot shouting “I am Error!” is helpful. Late in the game comes a twist straight out of the M. Night Shyamalan book, however, and its inconsistency with earlier events is so jarring that the whole narrative loses something.

Just rushing through, the game could almost certainly be accomplished in fifteen hours, but the temptation to engage in fossil hunting is quite strong. Stretching out the playing time beyond the bare minimum is sorely enticing, and the many activities available for the completionist could easily quadruple the period spent on the game. Those with the inclination and ability might also attempt to partake of the options for wireless play with others, further increasing the longevity of this title.

Visually, not much has changed from the first game. The number of creatures depicted has increased somewhat, but the 3D character models don’t impress much, though a few CGI animation sequences look pretty good. The audio is similarly fine without standing out greatly, showcasing a variety of tunes that are pleasing to the ear. Keeping the sound up during cleaning sessions is at least quite useful thanks to the distinct noise heard when the fossil itself has been reached.

Fossil Fighters: Champions is very similar to its predecessor, but doesn’t offer a significant improvement. Collecting fossils to clean is still remarkably addictive, while the game as a whole is entertaining without passing into the neighborhood of sublime. I enjoyed the original game, but all the elements not reused for this one have become difficult to recall a mere two years later. As Nintendo of America’s probable swan song for DS localizations it’s a solid choice, but not one that leaps to the forefront of the system’s library.