Upon its initial release in 1999, expectations were high for Final Fantasy VIII. Following on the heels of its highly successful predecessor, Final Fantasy VII, the next instalment with Squall and company deviated from the standard RPG formula by replacing the traditional sense of levelling up and buying better equipment with the concept of stocking and equipping magic to enhance stats. Hence, Final Fantasy VIII is often considered by some to be the black sheep of the Final Fantasy series, and disappointed many fans, including myself. Twenty years later, a remastered version is now available with enhanced character models and some modifiers to make gameplay more accessible. The final result, Final Fantasy VIII Remastered, surprisingly made my second foray a much more pleasant experience than when I had first played the game back in 1999.

The story starts off normally enough with Squall gearing up for his SeeD exam at Balamb Garden, which feels like a university-esque setting complete with classrooms, a library, cafeteria, and a training centre. Squall and his teammates soon go on a mission-slash-practical exam to assist the city of Dollet against the Galbadian forces. They are soon thrown into a conflict with Galbadia, and from there, the plot escalates into further absurdity.

While Squall and co.’s adventures are the main focus, players occasionally travel back to the past to take control of Laguna, a charismatic Galbadian soldier who aspires to become a world-travelling journalist. Squall and friends view Laguna’s antics from the future through some strange power to gradually learn what is happening in the present, and eventually confront a threat from the future. If that sounds strange, then there is also the monster living in the basement of Balamb Garden who secretly runs the place, and a visit to outer space. As the plot develops further along, each moment tries to outdo that last with more frivolousness.

Despite these outlandish moments, the characters and their interactions propel the story. The trust and faith they place in each other in the face of these crazy, space and time-transcending events makes them all the more endearing, and the resulting camaraderie has the feel of the Final Fantasy series in its prime. No matter how unpredictable the plot becomes, the players can rely on the great cast of characters to ground the insanity. 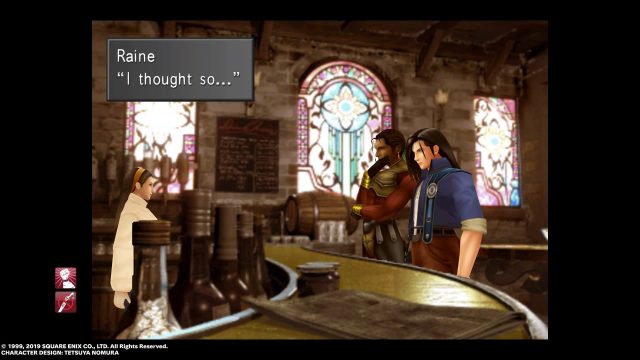 Character models look better, but the backgrounds remain the same.

Gameplay is the biggest point of contention in Final Fantasy VIII. Though experience points and levelling are still present, the biggest factor in growth comes from the stockpile of magic using the Draw command and attachment, or Junction, of it to characters. Which spells can be attached to which stats depends on equipped beings called Guardian Forces, or GF. Stocking 99 of a spell, necessary to get the full boost when used in a Junction, consumes time unnecessarily, especially if that spell is rare or uncommon.

Due to enemies scaling with the party’s level, players won’t need to spend time grinding experience, and it’s entirely possible to complete the game by running away from most fights and hardly levelling at all. Grinding for levels without proper use of the Junction system will only serve to hinder the party, and the game neglects to properly inform the player of this.

Despite these flaws, the junction system is quite deep and versatile, giving plenty of options to develop each character in any desirable way. Want a powerful fighter? Stock the appropriate stack of spells on the HP and strength junction. Magic-user? Junction the best spells for the magic junction. Those who properly learn the Junction system correctly can create an unstoppable party. 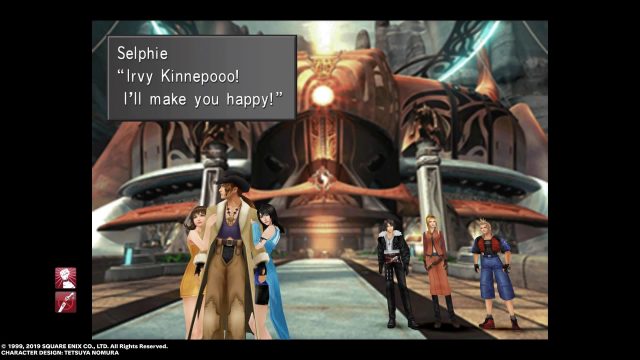 Character interactions bolster the game’s story, and they vary at times according to the player’s choices.

The remastered version alleviates the aforementioned gameplay frustrations with three new additions that can be triggered with the simple press of a button. First is the ability to disable random encounters. The second immediately maxes out all characters’ hit points and allows powerful attacks known as Limit Breaks to be triggered at any time. The third addition increases the game to three times the normal speed; in addition to quickening the grind of stocking magic in battle, this option cuts the lengthy transition scene between map to battle and back whilst also speeding up lengthy walks on static, CG-rendered backgrounds. Ladder climbing is also improved from a snail’s pace, and there are loads of ladders in this game for some reason.

The musical score, composed by Nobuo Uematsu, remains as it was in the original PlayStation release. The tracks enhance the game experience, interweaving with certain cutscenes to bring about stronger emotional tie-ins to the storytelling and setting the mood and tone of each location. Balamb Garden’s theme flows like a relaxing afternoon at school, and it is joined by many other melodic treats such as ‘Fisherman’s Horizon’, ‘Liberi Fatali’, and ‘Force Your Way’. Laguna gets one of the best rocking character themes of the series in ‘The Man with the Machine Gun’. Final Fantasy VIII has a fantastic soundtrack that holds up strongly even in 2019.

Triple Triad, a card based mini-game, is one of the best in the series. By collecting cards of monsters, bosses, GFs, or specific characters, each with its own set of stats, players can challenge other NPC opponents scattered throughout the world, with the winner filching a card from the loser’s deck. Triple Triad could almost be a stand-alone game, and collecting cards is addictive. Eventually cards collected can be converted into useful items, giving the card collection added depth in the second half of the story. 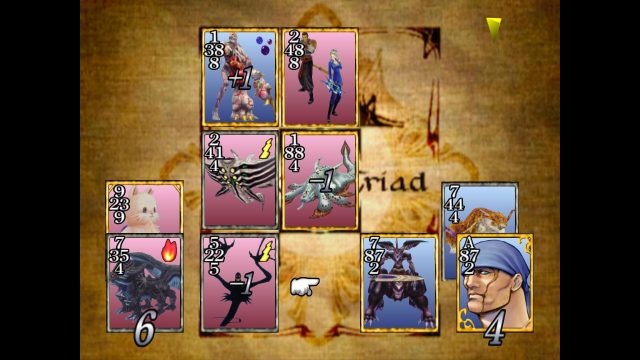 Triple Triad, a great game within a game.

Unfortunately, there are lots of things the remaster doesn’t fix. The graphics are a mix of good and bad, and not everything has a fresh coat of paint. The CG-rendered backgrounds remain unchanged, appearing grainy and pixelated as they did on the original PlayStation, and the overworld map hasn’t been updated, remaining a mess. Conversely, cutscenes still look great and have aged well; the new character models and portraits alongside an updated menu look much crisper in a higher resolution.

The controls are perhaps the worst offender. Players will find themselves pushing in one direction to leave one screen and transition into another, only to realise that the direction Squall is facing has changed during the next screen, sending him back to the previous screen. This will happen a lot, and it’s an endless source of frustration. Furthermore, navigating the characters on these static backgrounds and interacting with objects is a nightmare. Players will often find themselves unintentionally stuck or hopelessly mashing the ‘X’ button in hopes of interacting with the desired object such as doors and switches that seem to blend into the background. But with many secret draw points and items spread across these backgrounds, determined players will be rewarded for their vigilance. 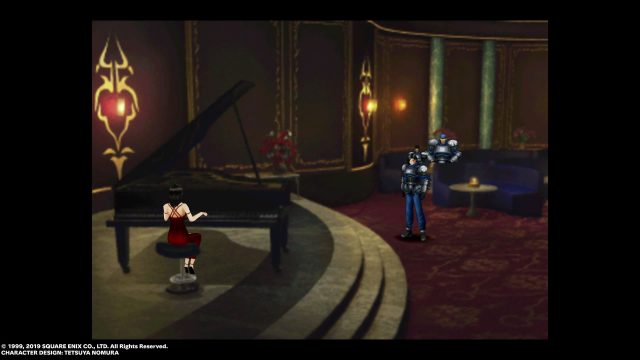 The lyrics of ‘Eyes on Me’ depict this very scene.

Overall, there is more good than bad in this version. Completing the game is much easier now with the new features and can take an average of around twenty to thirty hours for the main story, more for the completionists. The game has a lot of content for its time, and certain dialogue scenes change depending on which party member is present. For those who complete the main storyline, there is always the option to go back and play Triple Triad, which adds an incredible degree of replay value to the game.

Final Fantasy VIII Remastered showcases the definitive version of a game that has withstood the test of time. The story and characters are still engaging, the score sounds as beautiful as ever, and the art-design looks impressive. The game is much more enjoyable with the remaster’s new features, which help alleviate the issues with the archaic controls and the experimental Junction system. Players who had once despised the PlayStation edition due to its sluggish nature may be enticed to give Final Fantasy VIII a second chance with the remastered edition. I surely enjoyed this adventure more on the second go-round.