In 1997, the movie theaters of the world were gripped once again by the Star Wars trilogy being re-released, Seinfeld entered its final season, the Spice Girls had numerous hits, and the RPG world was gripped by a certain unstoppable dynamo of a game. How well the other items in the entertainment field have aged is a matter of opinion, just as Final Fantasy VII‘s effect may not have lessened with the passage of time — to some. The game’s luster has unquestionably dimmed in the years postdating its release, but the core is still solid.

Final Fantasy VII‘s story may be one of the most widely spoiled entertainment properties in existence, but serves well enough even with foreknowledge of certain events. It involves the efforts of a diverse group, with names like Cloud Strife and Cid Highwind, to deal with a sinister corporation named Shinra which has been tearing the planet and its people apart in the name of power and profits. Shinra’s bevy of bloodthirsty brutes has to share screen time with the infamous Sephiroth, who performs a lot of dastardly deeds in the name of preserving the planet (possibly). Eventually the planet itself gets in on the antagonist action with its Weapons, gigantic creatures that could do battle with Godzilla, rounding off a rather large enemy roll call.

Final Fantasy VII‘s combat is in the same Active Time Battle mold as its three Super Nintendo predecessors, except the combat party has been shrunk from four to three. The new wrinkle VII‘s encounters introduce to the series is the Materia system. These devices usually enable magic use, but some of them allow for other options such as raising a character’s statistics or implementing automatic counterattacks. Materia accrue experience that is separate from what characters earn after battle, and when one increases in level, the spells it gives access to and the number of times they can be used grows larger. The Materia can be freely switched among characters, offering the chance to customize the party freely and effectively. Leaving them on characters not currently in battle is something of a pain, but not too difficult to work around. 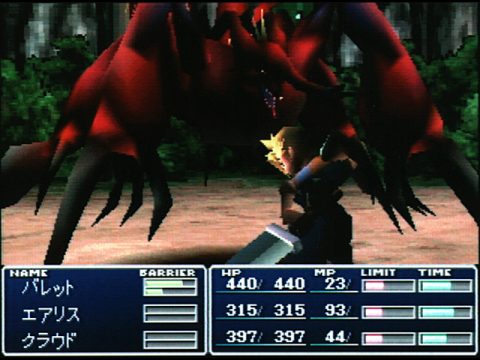 Many parts of the plot are intriguing, and its setting definitely draws interest, but the narrative is done no favors by Sony’s localization. Confusing grammar and oddly formed sentences pepper the text, along with blatant misspellings occurring far too frequently. The use of asterisks, ampersands, and other non-letters to convey cursing by Barret and Cid is inexplicable, given that this profanity-without-words was being parodied by such sources as MAD magazine long before. The lack of proofreading by Sony America makes appreciating this tantalizing tale frustratingly difficult.

Two other factors in Final Fantasy VII‘s combat were relatively new; Limit Breaks and lengthy summon animations. Limit Breaks are powerful special techniques charged by taking damage in battle, and once one is available it supplants the regular ‘attack’ option until used. Not being able to store a Limit Break until it would be most useful is an issue, but Final Fantasy VII is hardly the only game to commit this infraction, and since the concept was still fairly new at the time its imperfect execution is excusable. The summon animations were also new at the time, but mandatory viewing of them has aged very poorly. The most grating aspect of summons is the fact that, even if other characters were ready to take an action and the game is boldly displaying that fact, nothing can be done until the animation is complete.

Menus and equipment are heavily based on what came before in Final Fantasy, and succeed just as well. Final Fantasy VI‘s menu system was the clear inspiration, and VII‘s works just as well. Series veterans will find only one real new twist, the number of slots that weapons and armor possess for Materia placement. Equipment that offers bigger statistic upgrades may hold few, or no, Materia, forcing tough decisions to be made.

A significant exception to the general ease of interaction comes in Final Fantasy VII‘s minigames. Chocobo racing, submarine warfare, Mad Max-inspired road combat, and snowboarding will all be required to progress. They come complete with poor depth perception and the annoying controls of 3D action games before analog control was standard, making them unpleasant chores to participate in. 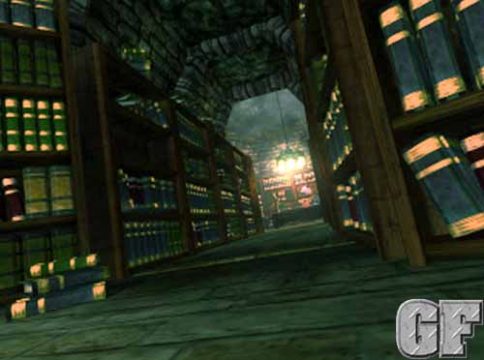 Sephiroth spent his time at the library before going nuts. COINCIDENCE???

Final Fantasy VII‘s graphics once astounded the RPG masses and sold PlayStations. Time has not been kind to them, however, and today they serve as a jarring reminder of how far 3D visuals have come. Navigation is a serious issue in this game, as the prerendered backgrounds look nice but are often a struggle to move through. Determining what is navigable and what is simply scenery is often a struggle, and when random battles are a constant menace, running around trying to find the way through a location is not fun. Battle graphics look somewhat better, but the early PlayStation visuals were still surpassed by the system’s later output, and guessing what the enemies in battle are is often necessary.

Nobuo Uematsu turns in a decidedly mixed soundtrack to accompany the action. The battle themes are good, and several locations have catchy compositions of their own. Most of the music is unremarkable, however, and FFVII fails to live up to Uematsu’s aural achievements in FFVI.

Final Fantasy VII‘s challenge is about on par with its immediate predecessor, having some potentially difficult moments, but nothing that will intimidate veteran RPGamers. The series tradition of having many optional quests continues, and ferreting everything out could easily double the game’s completion time. Rushing through it can probably be done in about twenty-five to thirty hours, with plenty more available for those interested.

At the time, this game wowed the world with its wondrous visual wizardry. Divorced of its attendant hype, Final Fantasy VII remains a good entry in the series that unfortunately suffers from its circumstances. Early PlayStation visuals have aged very badly, Sony’s translation does the game no favors, its minigames are a mess, and navigation can be an exercise in frustration. The core game beneath those issues is quite solid and enjoyable, but looking past the litany of complaints gets harder with every passing year.