It seems fitting that one of the forefathers of modern console RPGs has its own little mythology to go along with it. As the story goes, the eighties were drawing to a close and a little software outfit in Japan was having trouble. For some reason, people weren’t too keen on its mediocre racing games and bizarre platformers (Worldrunner 3D, while entertaining, raised eyebrows with its dubious 3D glasses “compatibility”) and things were looking grim. Ultimately, the folks at Square noticed a little game called Dragon Quest was selling exceedingly well, and so it was decided that some good old-fashioned (ahem) borrowing was in order. With a nod to the melodramatic (“Final Fantasy” allegedly having been coined the name since the title would have been Square’s swan song had it joined the company’s other offerings on the gaming world’s trash heap) and some basic mechanics filched from Enix, the Little RPG That Could quickly took off, powering its way to success with masterful character design, decent music, compelling gameplay, and an interface light years ahead of anything its inspiration could muster (a problem that has somehow managed to dog Enix to this day). Square would go on to repeat this successful combination many times, but the company’s initial rise to power can still be traced back to the game which starts, like its inspiration, with a princess being kidnapped.

Yes, the princess of Cornelia has been kidnapped, and while ninjas are not the culprit, there’s a sufficiently shady character behind the dirty deed to prompt the king to appeal for help from far and wide. As it so happens, a group of adventurers who are itching to save the world happen to be in the area at the time, and so begins the adventure. Players can select from six different classes in building a party of four characters, and these choices will impact considerably on the game’s outcome. Players looking to take the easy route can stick with powerhouses such as fighters and ninjas, while more adventurous individuals can opt for the weaker mages and thieves, both of which nonetheless have great strength if used properly.

Final Fantasy uses a turn-based combat system, with attack order and damage being decided by character’s agility and strength. As this is basically a fundamental RPG battle system, there’s not much to explain here. Magic can be purchased at shops and characters that can use it are allotted a certain number of castings per level of spell, a total that increases as characters level up. Magic is far superior to physical attacks against many of the game’s more powerful enemies, which is why it’s generally a good idea to have at least one spellcaster in your party at all times. Still, casters are much weaker and build HP at a glacial pace in comparison to the more physically assertive character classes. Then, too, the ability to use items to cast spells an unlimited number of times later in the game draws the actual usefulness of mages into question. Still, the battle system is well-balanced, and a step ahead of anything else that existed when Final Fantasy first came out. This is not to say it is perfect; there are a few flaws that make themselves annoyingly felt here and there. In particular, if an enemy dies, attacks targeting it are rendered ineffective instead of being redirected, which necessitates careful planning in laying out attacks. There is also a lack of powerful healing items, which can make healing up a dreadful chore if one is out of magic. Even so, Final Fantasy‘s battle system set an impressive standard which can still be found in some modern games. 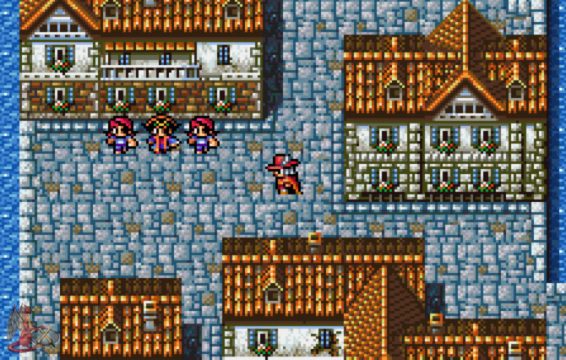 Bikke, scourge of the seven seas

As has been noted, there is a distinct lack of decent curative items in Final Fantasy. There is also a distinct lack of any way to purchase these items conveniently, and not very much space to store equipment. These may be construed as attempts at realism by Square, but they are the most annoying elements of Final Fantasy. This is unfortunate, since the game’s interface is otherwise very intuitive. Battle commands can be entered with a minimum of difficulty, navigating menus is easy, and best of all, there is no button required to use stairs. It is nevertheless terribly annoying to be forced to discard a set of Steel Armor only to find that opening the treasure chest that necessitated the disposal yields a measly wooden cane. That said, Final Fantasy‘s interface was greatly superior to its Dragon Quest counterpart, and set a good standard for Square’s later titles.

Nobuo Uematsu is listed as one of Final Fantasy‘s planners, but his greatest contribution (barring any secret programming knowledge of death that remains undisclosed to this day) is the music he provided. Final Fantasy‘s soundtrack is remarkably diverse given the musical limitations of the NES, and Uematsu manages to stretch the system’s scanty sonic selection admirably. His penchant for memorable melodies is much in evidence, and despite the fact that most pieces in the game are less than 30 seconds in length, they do not seem to grow terribly repetitive.

Visually, Final Fantasy also made fairly good use of the NES’s capabilities. The artistic design provided by Yoshitaka Amano is superb, at least as far as the monster design goes. The game does use a rather unwholesome shade of green to depict grass, but this is at best a superficial complaint; Final Fantasy‘s world has an unmistakeable feel about it that stems in part from the music and in large part from the visual design. Still, it is an eight-bit title, and it is basically impossible to justify calling any graphics at this level fantastic. 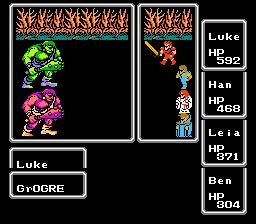 Final Fantasy, like many NES RPGs, is exceedingly more difficult than the titles that followed it. Though the encounter rate is not terribly high, there is no saving inside dungeons, so players must carefully budget HP and spell use, or risk fading before a dungeon can be completed. The actual battles themselves can also be a challenge; even the weeniest of enemies has the power to catch unwary players off guard, and status effects such as paralyze have a bite to them that can end a battle painfully. As a result, it is not uncommon for battles to last five or ten rounds, and with fights that long, the game can stretch out up to 20 hours or so, although it is possible to complete it in slightly more than half that amount of time with attention to speed.

It can also be an absolute joy to replay. Because the story is not terribly central to the game, the gameplay takes center stage, and since there is a great deal of potential for variety in party combinations, no two playthroughs of Final Fantasy are exactly the same, no matter how limited the actual process of playing through the plot points is. As a result, the game still feels fresh to this day, a familiarity that has not, in this case, bred contempt. There is just a sort of accessibility to the title, and new gamers and old gamers alike can find something to enjoy about playing it.

With a limited story comes a limited amount of detail to the actual mechanics of the story, and while Final Fantasy is not difficult to understand, there is not terribly much in the way of dialogue throughout the game. What is there has been translated capably, if stiffly. The only place where the translation falls apart relates to the gameplay; a number of high level magic spells do exactly the same thing, and the translation staff evidently took no pains to creatively name these equally uncreative spells, as “XXXX” is a good indication of. 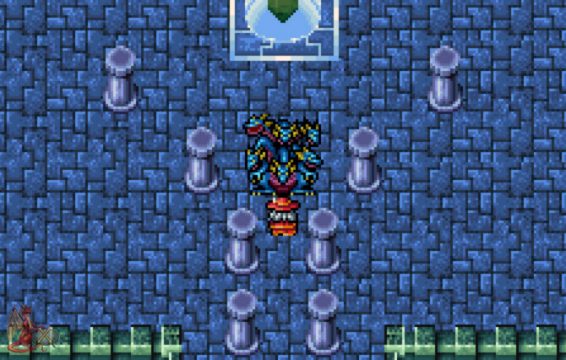 As suggested by the title of this review, not to mention the lack of any digits appended to its name, Final Fantasy is the original title in the series. That said, it is not totally steeped in creativity. While Square certainly raised the bar with its multiple party members, multiple hits, and diverse magic system, it did borrow the basis for each of these elements from the two other pillars of console RPGs (Dragon Quest and Phantasy Star). Once it finished doing this, it then spit in the face of its inspiration by declaring Erdrick’s death in tombstone form. As for the game’s story, it is a mishmash of various mythologies, with some mildly inventive stuff about floating fortresses thrown in to spice it up. All in all, while Final Fantasy constitutes the beginnings of one of the strongest RPG series in history, its arrival did not herald a great leap forward in creativity, although there are enough original elements to set it apart from its contemporaries.

Originality, though, is not a prerequisite for a successful game, as evidenced by the ridiculous number of iterations any Capcom series can expect to perform over the course of its lifetime. Final Fantasy took a successful formula and made it a little bit better, and in doing so solidified the continued existence of the company behind it. Certainly, this is the best result that such an effort could have brought about. It is truly a credit to the talented individuals at Square that they got their acts together and turned out a game that displayed what they are capable of. The RPG world is better for their concerted effort, as is evidenced any time the company shows a similar amount of fortitude in its development process. Final Fantasy was the first, but fortunately, despite the contradiction inherent in the naming of any sequel, it was not the last.