Welcome to JRPG Study Time! Unfortunately, due to various reasons, it’s been *checks calendar* 11 months since the last one, but while I spent the last year not working on this series I did manage to play more retro JRPGs. One such game was Dragon Quest II.

I previously covered the original Dragon Quest, and I really enjoyed its simple mechanics and charming coming-of-age metanarrative. It really is a great “first RPG”, which works to its benefit. Just eight months (!) after the first game released, Dragon Quest II entered the world with a bigger map, three party members instead of just one, and deeper battle mechanics. If the original game could be considered first grade for RPG newbies, then the sequel is the second grade. That doesn’t mean the game is easy, but that the mechanics are deep enough to be engaging while maintaining a simplicity that could reach the mainstream.

The overworld is exponentially bigger than the first Dragon Quest, but more than that, Dragon Quest II features the first (that I’ve seen) alternative method of transportation in a JRPG – a boat! The first third or so of the game plays as you’d expect with on-foot overworld navigation, town sleuthing, and dungeon looting. Once you get the boat, your journey truly begins. You’re tasked with hunting down three “Sigils”, shiny magical orbs, before you’re able to take the fight to yet another demon lord. It appears to me that this is a very early example of the MacGuffin hunt that we see so often in JRPGs. The difference here is that these Sigils aren’t found exclusively in dungeons, but also through town interactions and riddles. The feeling of exploring the world, poking around for secrets in hopes of finding any clues, could be compared to The Legend of Zelda, but that released just three months prior, so it’s doubtful that it had much of an influence here. Dragon Quest III greatly expands the MacGuffin hunt, but we’ll cover that another day. 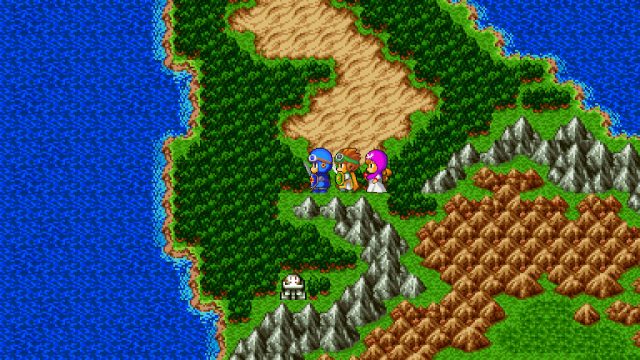 Dragon Quest II is a less lonely adventure than its predecessor. While the protagonist’s companions may be light on personality, they add more strategic fun to battles.

I can understand how the game’s many riddles and general lack of direction would be a turn off, but personally I find a certain appeal in the adventure of it all. Just like any other retro game, a guide will help streamline the experience, but I think it’s important to think about how the developers imagined people would interact with the game when it came out. These Dragon Quest games are quite literally worlds to get lost in. Getting lost means more battling, which means more levelling. Organically levelling up like this feels better than immediately finding where you need to be and then having to grind in one spot. Also, in most cases, NPCs will give you clues as to where you need to go and what you should try to do to solve many of the game’s puzzles. Of course, no one likes to waste time, so the more efficient option will likely be chosen, but it’s appealing to imagine the purity of a Dragon Quest game being the only thing you have to play for a year or so, with nothing but friends at lunch break to turn to for help.

It’s interesting that Dragon Quest II really is just bigger and better than its predecessor, in an age where sequels loved to forget the things the first game did well in favor of doing something entirely new (The Legend of Zelda, Castlevania, Final Fantasy, etc). Regardless of this, the game still has a long-held reputation for having a terrible difficulty spike during the final dungeon. I can’t speak to this, as I played the more-accessible mobile version. I made sure to grind a bunch before I got to this point and managed to get through all right. I’d be interested to learn how this affected the enjoyment of the game for people who played this when it came out.

Look, I’m a relatively new student at the school of RPGs myself. There’s a lot that I have yet to play. So as I am now, I can’t definitively declare that any game I play truly did something first. After all, there are years’ worth of computer RPGs (that I’ve yet to play) that were made before the NES came out. Yuji Horii and company sought to make the RPG experience accessible with Dragon Quest, and it seems to me that the early JRPG landscape was built off of Horii’s distillation of computer RPG complexity, rather than replicating those games directly. If any RPG scholars could please educate me, I will listen and I will continue playing my elementary JRPGs anyway.

Next month on JRPG Study Time, we’ll explore Final Fantasy and trace its influences and innovations. Class has ended for today, but don’t forget to do your homework: play more JRPGs!