Not long after North American RPGamers got their hands on the DS remake of Final Fantasy III, Square Enix announced plans to recreate the fourth installment of the series as well. The RPG publishing giant once again signed up the FFIII remake developer, Matrix Software, to create a new vision of Final Fantasy IV for the Nintendo DS. Seeing Final Fantasy III get the treatment was understandable, as the game had not seen another release aside from the initial Famicom one and had never come out in North America. Final Fantasy IV is a different story. This title has seen three prior North American versions plus a Japanese-only WonderSwan Color edition. The most recent of these hit the states in the form of Final Fantasy IV Advance at the end of 2005. So with less than three years from its last release, does Final Fantasy IV DS stand up as the greatest version to date? That depends on the interpretation of the word “greatest.”

The most noticeable change to this version of Final Fantasy IV comes in terms of presentation. The graphical change to 3D character models, the enhanced soundtrack, and the addition of voice acting are the major changes. Visuals during combat are brighter and crisper. Though CG is not used for in-game cutscenes, the scenes are much more elaborate featuring 3D animated characters, a decent amount of which include voice acting. The voice acting is handled very well for the majority of the characters, with any complaints limited to a character not sounding exactly like a lifelong fan of the game might desire. Along with the voice acting, the soundtrack is a solid recreation as well. Even though all of the tracks from the original return, purists might not like it due to some style changes. Regardless, the soundtrack is still top quality. With the most radical change coming in terms of presentation, it helps to differentiate this from all of the prior releases that featured no real change in the areas of graphics and sound.

Most of the other changes to Final Fantasy IV are less drastic, especially the ones to the battle system. Fundamentally, the game plays exactly the same as it always has. Each character has a specific class, and hence, unique abilities tied to that class. What has changed here is a rebalancing of characters. For example, “spoony bard” Edward now sings useful songs such as an HP regen song and a song that will grant haste to the entire party. The challenge has also increased slightly with bosses now requiring new strategies and having painful counter attacks, though that does not make them unmanageable. It does require players to make the most of status effect skills and spells, where bosses in most of the prior versions of the game could be overcome through brute force alone. 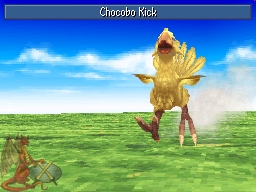 Hand in hand with the rebalanced gameplay is the introduction of augments, special abilities that can be assigned to any character. Augments are assigned to a specific character and cannot be removed once equipped. Since characters can only use so many at one time, it’s best to spread them around. Some examples of augments are auto-potion, counter, and MP+50%. Players can choose to remove characters’ existing abilities or attack options, but not items, so characters can have a mix and match of up to four abilities at a time. With the right combination of augments, some powerful setups are possible that can make even the toughest battles much more manageable.

Another new addition is the mapping system. In this, players are rewarded with items for exploring 100% of each area that they come in contact with. This gives players a reason to go out of their way to find every part of every area. While a small addition, it does help reward completionists and make sure that non-completionists explore everything.

The story in Final Fantasy IV is much like the battle system; there have been additions and things have been fine tuned, but nothing has fundamentally changed. The story still focuses on Cecil, former captain of the Red Wings, exploring the world to stop the wicked kingdom of Baron. Character interactions are handled quite well, especially in scenes that are voiced. The cast is full of variety and is very enjoyable throughout the game, with frequent cast changes adding a great dynamic to the story. The plot could have been modified to be stronger this time around with more character development and background given for all characters, but the developers instead decided to use the same story once again with only an improved translation and a few minor additions for the main character’s background. This isn’t to say the story’s bad, because it’s not. It’s mostly a problem of the story not developing as far as it could have, so the untapped potential is once again left untouched. 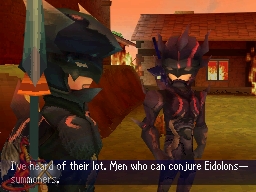 Be fair, Kain. There are more female summoners here than male.

As a remake, aspects of originality come from what’s been done with the source material, how the game’s been changed or enhanced, and what’s been added. During the twenty to thirty hours needed to explore most aspects of the game, not much is done with the original content. At its heart, this is classic Final Fantasy IV. The biggest changes are cosmetic and the additions are minor, but enough to warrant another playthrough even for gamers that have played this numerous times.

So is this the definitive version of Final Fantasy IV? While it offers the most impressive presentation, it lacks the option to change party members found in Final Fantasy IV Advance in favor of the augment system. It features some additional character background, however minor, that has yet to be seen in a prior edition. This DS release also features a rebalance that makes almost all of the characters seem useful. Overall, these changes are enough to say that this is the most definitive version of Final Fantasy IV to date. However, it would be a far stretch to say that this game is leaps and bounds greater than any other or that the developers did everything they could to make the most of the game while still maintaining the integrity of the original. Despite this, both fans and newcomers alike will have plenty to keep them entertained.