The Warriors of Lights’ Final Voyage

Originally released for the NES, Final Fantasy III has certainly waited a long time to make its journey across the Pacific. This particular tale of the Warriors of Light is the last missing game in the series to reach these shores, and it does so in the form of a DS remake. Being a remake, it is not without a number of upgrades, primarily to graphics and sound, plus some bonus content on the side. However, rather than have a number of its mechanics tweaked as with the games released in Final Fantasy Dawn of Souls, Final Fantasy III DS remains fairly oldschool and true to the original aside from the aforementioned upgrades that don’t effect the actual gameplay. Magic levels each still have their own MP, Phoenix Downs remain rare items, and the difficulty hasn’t been dramatically dumbed down.

As with most oldschool games, battles are a very large focus of Final Fantasy III. Returning to the same basic setup as Final Fantasy, each of the four Warriors of Light selects a class, each with its unique stats and skills, and fights enemies in the traditional manner, using commands such as attack, guard, magic, and item. One major change to the traditional setup is that characters are able to switch jobs at will between battles, allowing for added flexibility and a number of interesting strategies as the game progresses and new classes are unlocked. Though there are a large number of battles, the majority of them are relatively quick without sacrificing challenge. Combined with the possibilities of the class system, this creates an enjoyable, if slightly dated, battle system. 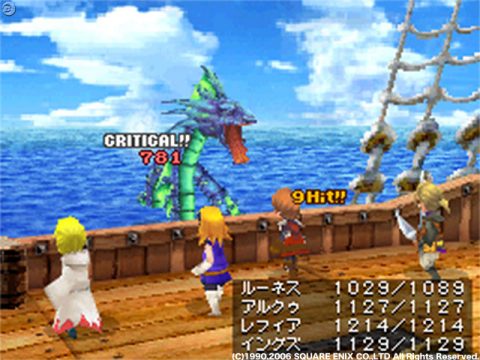 Battles and classes are where the action is.

As with most oldschool games, a good amount of time will likely go into leveling up, though experimenting with the class system can often take away the feeling of grinding in this case. Depending on how much time players spend doing this and how many sidequests they go on, it will likely take them between twenty-five and thirty-five hours to complete the game.

Also falling into the usual oldschool RPG formula, the story is a bit lacking by modern standards. Luckily, efforts have been made to partially amend this in the remake without significantly changing the game. The largest improvement is that each of the Warriors of Light has been given personality and their own individuality. When an NPC joins the party, it is also possible to enter a small cutscene with them at a push of a button. These cutscenes, though small, give the characters more time to shine. As a result of these welcome additions, characters are more developed and the storyline feels more fleshed out at no cost to the overall feel of the game.

Another welcome upgrade is to the interface. The map that appears while traversing the overworld makes finding places much easier, and it’s easy to see who can equip what while in shops. Unfortunately, the interface isn’t nearly as refined as most players would probably like, despite these improvements. When changing classes, all equipment is automatically removed. An optimize feature would have made things a lot easier due to how much class switching players are likely to undergo. Other minor complaints include not being able to skip NPC party member cutscenes if they’re repeats, difficulty in easily picking out stronger equipment, and underuse of the other DS screen when it could be easily used to display useful information. None of these really detract from the game, but the interface could certainly have used a bit more polish. 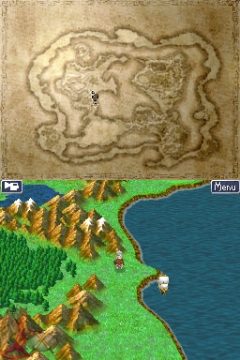 Lovely environments, plus a rare use of the second screen.

One part of the game that has been greatly polished, however, is the quality of the visuals. The character and enemy models are all in 3D, and pretty much everything has been given quite a large amount of detail. Even the character artwork changes based on the class of the character, and weapons look different depending on what the wielder has equipped. Visuals like these have yet to be matched on the DS, and that is without even mentioning the beautiful opening FMV.

Though not quite as impressive as the visuals are, all of the music has been nicely remixed. The quality is quite good in most cases, and only a few dungeon tracks get old as the game progresses. The sound effects are also a bit above average due to the level of detail that they have been given. Different weapon types even have subtle differences in the sounds they make.

As far as remakes go, Final Fantasy III DS is among the best. The visuals and music have both been brought up to and beyond the level of most other DS titles, the characters have been given individuality and character, and the interface, while far from finely polished, is pretty good. Even with all these upgrades, the remake remains quite true to the original instead of changing some of the mechanics and difficulty as with Final Fantasy Dawn of Souls. The somewhat dated story and gameplay may not appeal to everyone, but this is a very solid and enjoyable remake that’s a great choice for anyone looking for an oldschool game or the lost chapter of Final Fantasy history.