Battles in Dawn of Souls look and play out identically to those in Origins. The battles are turn-based; all of the commands for the characters to perform in a turn are given out at the beginning. Once the commands have been entered, the player’s characters and the enemies exchange blows until the next turn or until one side is defeated. In Final Fantasy, the characters gain experience points. Once enough points have been accumulated, the characters gain a level and their stats are raised a certain amount. Final Fantasy II‘s battles run a little differently. The characters don’t gain experience points or go up levels, but the different status sections of each character grow individually based upon how they are affected in battle. Strengthening characters in Final Fantasy II can become very time-consuming and even outright tedious, and it doesn’t help that doing so is essential to completing the game.

The two games make the most graceful transition between consoles of any Square Enix port to date. The upgraded graphics look crisp and clear on the high-resolution LCD display of the Game Boy Advance. This is a big part of why the game is so fun to play on the handheld, even with Origins still out in the market. The translation of the audio is as good as that of the video. The music is as clear as a bell, without any noticeable impurities, although the limited sound capacities of the Game Boy Advance keep the music translation from being as good as it could be. With the music composition having been supervised by Nobuo Uematsu, it’s hard to be disappointed. The problems that plagued Square’s previous ports, Final Fantasy Anthology and Final Fantasy Chronicles, are clearly nowhere to be seen. Dawn of Souls even outdoes the Origins port, which had been considered the best of the Square Enix ports. 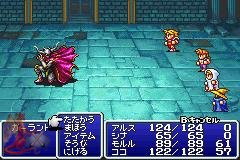 Gamers new to the genre and Final Fantasy veterans alike will find the controls and commands very accessible and easy to understand. The menu is accessed with the start button and a world map is accessed by pressing the select and B buttons together in both games. Another new addition is the implementation of a save option, formerly absent from the original games. Gone are the days of having to heal at an inn everytime a save needs to be done. Now, players are able to save their game whenever and wherever they like, battles aside. Players can save their games in any of the three separate save slots per game.

Though both games are difficult if played though carelessly, they have been severely dumbed-down from the original versions. Even so, the games are still not meant for the weak-hearted or those who want to play through them in a hurry. Time must be set aside for the strict purpose of gaining strength so that the next area can be passed. Without doing so, the games are nearly impossible to complete. The originals were much more difficult yet, and some may complain that Dawn of Souls is far too easy now, but those unaccustomed to old school RPGs will find themselves sweating through battles on more than one occassion. With the proper time taken to complete the games, players should find themselves spending roughly 40 hours on both stories. Add another 20 or so hours to that for those who want to explore the new additions. 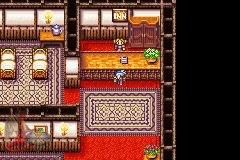 The most noteworthy implementations to Dawn of Souls are the new stages. These bonus dungeons were absent in the original games and the Origins incarnations Final Fantasy‘s Soul of Chaos includes four new dungeons that are unlocked after defeating each dungeon’s respective guardian. The dungeons range from five to 40 randomly generated floors filled with powerful items and weapons, as well as bosses from other Final Fantasy titles, such as Final Fantasy IV‘s Rubicante. However, the completion of the Soul of Chaos dungeons adds nothing to further the story of the game; its main purposes are to extend the play time, retrieve secret items, and to fight the secret bosses. To fully complete Soul of Chaos, players may find themselves spending upwards of another 10-15 hours in addition to the 20 hours needed to complete the main game.

Unlike Final Fantasy‘s Soul of Chaos, Final Fantasy II‘s Soul of Rebirth is just one dungeon. In fact, it’s essentially the final dungeon of the main game, except it is played with the characters who died died during the story, rather than the four main characters. The story begins by flashing back to the death scene of one of the characters and goes from there into a new struggle, a new journey, and a new enemy that these deceased characters must face on their own. This dungeon can only be unlocked by beating Final Fantasy II and it does add to the story by providing an additional, more complete ending to the game. Soul of Rebirth can be completed in roughly six to 12 hours, depending on how much the deceased characters were strengthened prior to their deaths in the main game. Another neat surprise is the addition of a music player that can be accessed after both games are completed. The player includes all of the music tracks from both games and sort of turns the GBA into a make-shift MP3 player that only plays Dawn of Souls music, or however one would like to think of it.

Unfortunately where the package falls the hardest is originality. Being a remake of a pair of 15-year-old games is not too bad for originality, but once 2003’s Final Fantasy Origins is taken into account, these games become remakes of remakes. It is essentially the same package seen in Final Fantasy Origins, only moved to a handheld, and with the full-motion video sequences switched out for bonus dungeons. Also, these two games represent the most basic versions of the more complex systems that gamers have become accustomed to with the latest entries in the Final Fantasy series. There’s nothing new here in terms of game play. However, for those who missed out on Origins, or the original NES games, Dawn of Souls is sure to provide an addictively fun new adventure.

Though the package isn’t perfect and wasn’t improved upon much since Origins the translation it makes onto the Game Boy Advance is remarkable and is reason enough to give it a go. Final Fantasy‘s unforgettable classic adventure is still as addictive as it was back on the NES and the game is just as strong in Dawn of Souls. It didn’t need anything extra to make it better. Though, the bonus dungeons don’t add much to the game, they’re certainly a valid excuse to keep playing, if such an excuse is needed. Unfortunately, Final Fantasy II‘s flawed battle system and gameplay mechanics are too many to be easily forgiven. The extension of the story and the addition of a new ending with Soul of Rebirth, however, are the game’s saving graces and make it worth a run-through. Those who played Origins, however, may find Dawn of Souls a little bit more than familiar; having the game on a portable system, though, makes it more worthwhile.