The Far Cry franchise has struggled to find its exact place in the world of shooters. Far Cry 3 is no exception, bringing back the lush environments of the first game and the spin-off series, the shooting and fire propagation mechanics of the second game, and a few tricks and elements from other recent games. The end result is an enjoyable, if tonally dissonant, game.

The plot centers on Jason Brody, world class fratboy jerkface, and his crew of equally over-privileged, self-obsessed friends who find themselves kidnapped by pirates on the final leg of their South Asian vacation. Jason escapes and is then recruited into the local resistance, whereupon he shoots, stabs, and explodes his way through villains, freeing both his friends and the inhabitants of Rook Island. It’s one of the most, shallow, cookie-cutter video game plot in the history of gaming; the characters even have colour-coded outfits for your convenience. There is no nuance, no deeper levels to any of the characters or factions. Players keep waiting for a penny that will never drop, a twist in the plot that never comes. Everything is as it seems. Little about the story stands out, with two exceptions: Jason and Vaas.

Vaas is the game’s initial antagonist, a drug-addled madman with a manic, Joker-esque characterization that is both captivating and frightening. Jason, however, is more subtle. The typical shooter protagonist is a blank slate upon which the player can imprint himself. Not so here. Jason has a complete character arc as he slowly slides into very dark places. As the game progresses, there comes a point where he is reunited with his friends and he comes to a realization. After committing enough machete-based violence to make Danny Trejo blush and determining the ideal method of shark hunting involves explosive arrows and an RHI boat, he is no longer the same person he was. It’s an often neglected element of the hero’s journey that the character returns to his starting point to see how far he has come beyond it.

That being said, it’s not as though the game isn’t trying to be more than that. Activities like hang gliding, ATV races, and zip-lining, along with the use of a DSLR camera, seem to be trying to juxtapose vacation atmosphere and all the brutal violence being perpetrated. Far Cry 3 tries personal horror in the vein of Spec Ops: The Line, attempting to mirror Jason and Vaas’ characters, not to mention alluding to Apocalypse Now and filling the chapter breaks with quotes from Through the Looking-Glass. Someone on the writing team was really trying to create something substantial, but the pieces never quite come together. 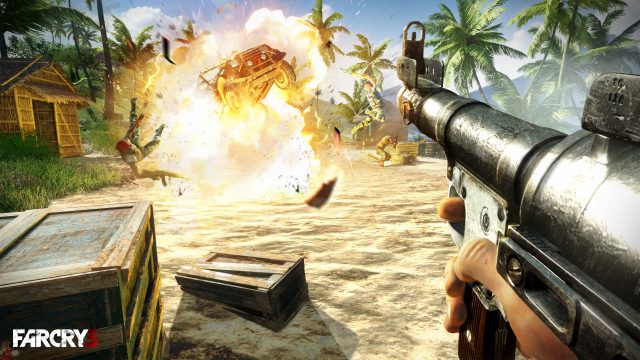 Leaving story aside, the game attempts to take first person shooter gameplay and use hybrid genre construction to graft on RPG elements. On the shooting side, the kinesthetics are great. Shooting feels smooth and tight. The game is also slavishly devoted to the first person perspective, never once leaving it. This would be all right if the only result was awkward head bobbing in poker games, but the field of view for shooting is ill-suited to driving around what with the need for peripheral vision to not drive off the side of the road all the time. For RPG elements, completing tasks and defeating dudes earns you experience which can buy perks on three different trees that give players new ways to get the job done, or improvements to existing abilities that make the violence a much more fluid experience. There’s an appreciable power curve and no one ability feels like a big step up, but halfway through the game Jason feels much more hardcore than he did at the start. 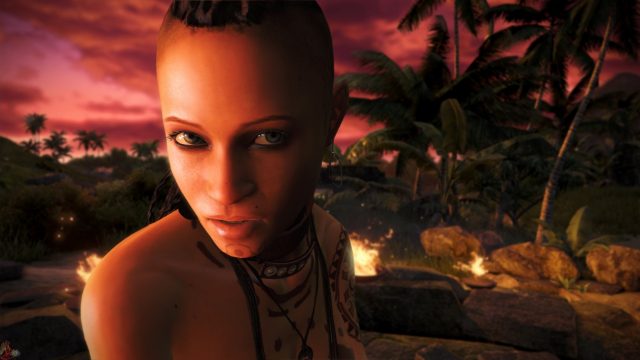 Not your average voodoo lady.

Also from the RPG spectrum come two crafting systems. Players can skin the local fauna to construct better bags, increasing carrying capacity; different plants can be harvested to create various types of performance enhancing drugs. None of this is as deep as an Elder Scrolls title, but it does reward exploration. Firearms can also be customized. For a little cash almost any gun can have its magazine expanded, any number of scopes fitted, or be silenced. Nothing that brings about a drastic performance change, but it does let players feel as though anything can be made to suit their style.

There is a lot of freedom to how gamers can approach most objectives. Taking out a pirate outpost can be a matter of creeping about using distractions and stealth to remove all Jason’s opponents, or dropping in on a hang glider and carpet molotoving everything that moves. The game also makes every weapon and combination of weapons a viable play option; from the standard pistol and submachine gun combo to a flare gun paired with bow and arrows. It all works and it’s all fun. This throws into sharp contrast just how dissapointing the game’s few railroaded sections are. Every boss fight finishes in a QTE knife fight of the ‘press X to not die’ variety, and there is one mandatory stealth section that is just an exercise in frustration.

If the single player isn’t enough, Far Cry 3 does offer a number of multiplayer modes. Competitive multiplayer offers the run-of-the-mill deathmatch and territory control options, plus Firestorm mode, which is like territory control, but with a lot more fire and thus more awesomeness. The cooperative option, however, is a Left 4 Dead-style story mode intercut with small competitive mini games like a capture the flag on ATVs or a sniper rifle shooting gallery. It’s great fun to grab a few friends and play through these missions.

Even on the Xbox 360 with its object pop-up and texture pop-in issues, everything looks absolutely amazing. Characters are detailed and expressive. The jungle is lush and gorgeous, and the amount of chaos the jungle brings is great. Anyone who plays this will have at least one story about how a rampaging bear cleared out an outpost while they were waiting to strike, or getting eaten by tigers while scouting a location. It’s a wonderful sort of anarchy. The game’s soundtrack leans more to the ambient, but it always supports the mood and made me appreciate dubstep for the first time.

Far Cry 3 reaches for greatness, but falls short at merely being really fun. It has a few hiccups here and there and the story is very thin, but the exploration and combat really shine. It’s a worthy addition to any collection.