Jack of All Lives

I recently rolled credits on Level-5’s Fantasy Life, but it’s hard to say when exactly this game ends. Being a strange amalgam of Dragon Quest and Animal Crossing — while at the same time not exactly resembling either — it’s difficult to pin down what exactly the developers wanted to achieve with this title. At the very least, they managed to make something that was immensely playable despite not being too interesting in the particulars. Yes, that sounds paradoxical, but it’s an accurate summation of this game’s experience.

Storywise, Fantasy Life is a definite miss. While the basic premise is interesting, being that of a happy little world on the brink of destruction as strange meteors fall like fragments of a crumbling night sky, remarkably little happens. The only source of conflict is “Man vs. the Inevitable.” Any character who so much as looks like a potential antagonist, rival, or villain turns out to be a good guy at heart. The handful of primary plot characters all learn how to be happy and true to themselves. The few meteorite-infected monsters are handily routed, sometimes without even the need to slay them, and the impending crisis is being handled by a talking butterfly that gathers people’s wishes to use as a power source. There’s enough story in here to maybe support a ten-hour title, but the player will probably clock in as much as eighty before even approaching the game’s lack-of-climax, which leads to an interesting conclusion: the greatest weakness of this game’s central plot is the fact that it has one at all.

What’s supposed to be the heart of this game, the core around which it rotates, is the simple concept of living a life. Just after passing through the character creation process, the player must choose what life his or her new avatar shall live, i.e. what role he or she should take in this cute little fantasy realm. There are three basic flavors of life in this game: combative, gathering, and productive. Combative lifestyles include Knight, Mercenary, Hunter, and Magician, which altogether provide most of the fighting skills. Gathering lifestyles are based around using timed button presses at specific points on the map to gain raw materials, and include Fisherman, Prospector, and Lumberjack. The remaining lifestyles are all productive, focusing on making items via quick-time events, and include Blacksmith, Carpenter, Seamstress, and Alchemist. 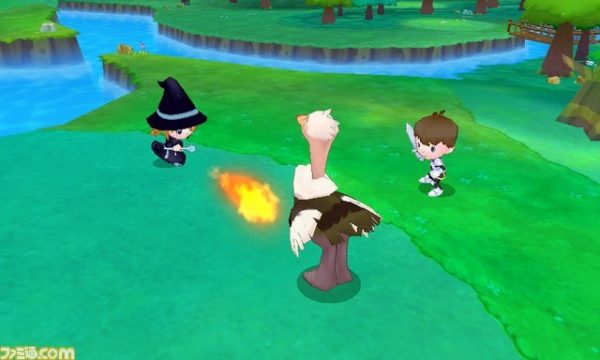 Anyone up for some fried ostrich?

Each lifestyle has maybe ten minutes worth of individual plot that serves as a thin veneer over the tutorial sections. These vignettes teach the basics of their jobs, and most range from uninteresting to completely boring. After this intro section is done, no more actual story will occur in connection to specific lifestyles. The core concept of choosing a life to live in a fantasy world, while still present, is shunted to the side so that the plot can be shoehorned in, when instead every one of the twelve lifestyles could have presented a different, shorter subplot to be enjoyed. In the end, the disaster storyline trumps all.

Further diluting the importance of the player’s lifestyle choice is the fact that it’s not even a permanent decision. For all the importance the game tries to place on commitment and learning to enjoy life as it comes, it also does everything it can to encourage the player to switch through jobs as often as possible. Changing one’s entire life is as easy as talking to a dude in any of the three towns, with no repercussions except maybe some costume changes. The player will be inundated with side-quests, most of which will require expertise in jobs besides the one originally chosen. For that matter, some of the production-based jobs require raw materials in their higher levels that simply are not available without access to a high-level gathering class license. It’s theoretically possible to complete the entire game while pursuing just one occupation, but Fantasy Life gives the player every reason not to.

Getting NPCs at all, aside from those the story throws at the player, is another matter of the game not wanting anyone to stick with one life. In general, recruitable characters are tied to one of the twelve lifestyles, and only become available once a certain rank is attained in that life. So, if the player decides to be a lumberjack, then all of the non-story recruitable NPCs for him will be lumberjacks — unless he decides to switch around and level up a different occupation.

What’s so fun about it then? Well to start, there’s the combat. Fantasy Life lets the player roam freely across broad stretches, fighting monsters on the fly, but much of the combat actually resembles its big brother on the PS3, Ni no Kuni: Wrath of the White Witch. When weapons are drawn, the character avatar will automatically center his attention on the target monster, easily circling and flanking, advancing or retreating, and in general being quite maneuverable while never losing track of what’s supposed to be hit. The recruitable allies each have three or four abilities with which to attack or support, and the AI behind them is robust enough that they are definitely more help than hindrance. Just as easily, weapons can be sheathed so that the player can run like heck (especially if an NPC gets too bold and kicks a sleeping dragon). Fighting is streamlined and easy to pick up, while containing enough challenge with the occasional strong monsters or non-narrative bosses that the player will have to keep on her toes to survive. As this is a game meant for kids, revive potions for the avatar are thick on the ground, in chests or as rewards from quest-givers, but even so, the biggest and baddest of beasts will provide a challenge. 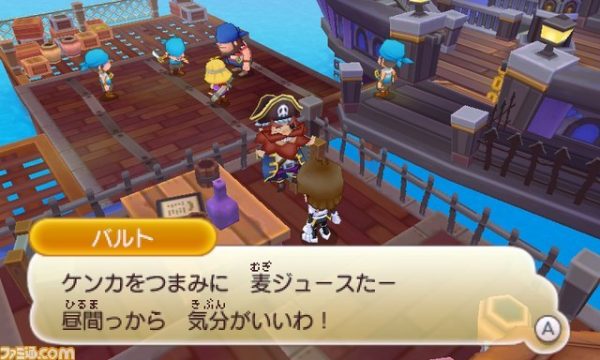 A pirate’s life for me, but not for you!

Unfortunately, the choice of weaponry is less varied. Knights get short swords, while Mercenaries have greatswords. Hunters have a variety of status-inflicting arrows, while Magicians get basic elemental magic. There are multiple hit combos, some more readily accessible than others, and multiple levels of charged attacks for these characters. All other job classes must make do with either knives or their little fists of fury, which are as adorable in action as they are feeble. NPCs actually get more variety in this department, if only due to the fact that their character designs already accommodate things like picks or axes and it was too much effort to make them more malleable.

The item creation parts are also surprisingly addictive, even though the game recycles the same three sorts of quick-time button presses for a wide range of activities covered by four different occupations. Gathering and productive classes all get their own special powers, of a sort, which makes them better at delivering strong job performances or getting “into the zone” to complete tasks in record time. It’s unfortunate that there’s no real impetus given to perform well in a production class beyond getting good gear for oneself or occasionally fulfilling a side-quest. The addition of an actual shop simulation would have been nice here. 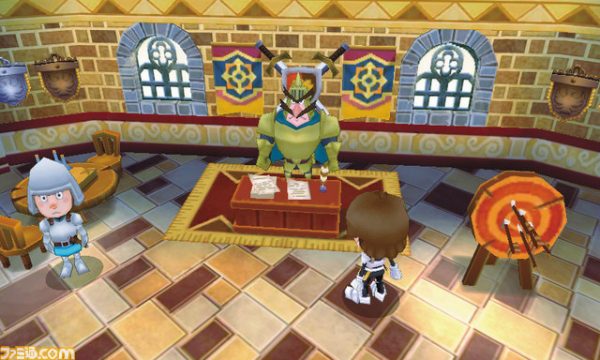 Can you guess why he’s nicknamed Captain Boomerang?

Graphics and sound get a good score together in part because these two aspects of the game complement the overall tone and theme of Fantasy Life so well. This is not a dark or sinister world; it’s one step shy of being all sunshine and kittens, in fact, and the presentation is key. Everything is cartoonish and friendly, or cartoonish and grumpy, or just plain cartoonish. It’s a bright, playful world for children to explore, and any adults who wish to try it had better recognize that fact. The music reinforces the childlike simplicity of the game, with light melodies ending slightly and comedically off-key, and kazoos keeping a prominent place in the orchestra. Upon reaching mastery of a lifestyle, the player will also be treated to a song specifically dedicated to that occupation, and in keeping with the target age of the audience the lyrics are the sorts of things elementary schoolers might write.

So, is this a game for everyone? Definitely not. This is a game for children, first and foremost. Anyone looking for a more mature storyline, or any semblance of a coherent plot at all, had best look elsewhere. Anyone looking for a silly game to play, one that will keep a kid occupied for hours on end, with many of the same addictive and repetitive qualities of an MMORPG, would be well served to check this one out. I for one had a hard time putting this game down even after the honestly pathetic ending, and I wanted to move on to another game. In many ways, this game is the equivalent to a musical earworm: it’s not very deep — barely kiddie pool, in fact — but it just gets in your head and keeps playing, over and over. And in that way, it certainly succeeds as an entertainment and as a game.