My experience with life simulation games is mostly limited to the Animal Crossing series. While I adored the first game released in North America for the GameCube, I spent less time on its sequels and ultimately skipped the latest incarnation on the 3DS. I became curious about Fantasy Life, a 3DS title that is often likened to Animal Crossing, and after some hemming and hawing decided to purchase the game. Perhaps all I needed to become interested in life simulation elements again was monster slaying and some sort of plot. While the game’s competence in the latter area is questionable, it is endearing and entertaining enough that I don’t plan on putting it down for a while yet. Fantasy Life falls short in a few areas, but its combination of RPG and simulation elements make it a surprisingly engaging game.

Fantasy Life‘s main story is in some ways an elaborate excuse to present new areas without ever gelling into a suitable narrative. The story centers on a talking butterfly who encounters the protagonist at the beginning of the character’s new Life — what the game calls its job classes. The two need to gather wishes and relics left behind by a goddess in order to save the world of Reveria from creature-corrupting meteorites of doom. While there are some interesting points to the plot, it feels tacked on and inconsequential. Conflicts and misunderstandings that involve generally complex themes such as political disagreements, civilization versus nature, and fate or free will, are all neatly resolved with little effort. The abrupt ending does not help.

What saves the story from being a complete wash is the vivid characterizations of its cast, brought to life by a humorous and tongue-in-cheek localization. The NPCs aren’t exactly deep, but most of the important story characters as well as the major players during the Life subplots are quirky and distinct individuals. King Erik of Castele is a grouch despite looking like an eight-year-old, though he proves to be a noble monarch once he learns the world is in danger. Olivia Pescado, the governor of Port Puerto, is a no-nonsense type who walks the line between noblewoman and pirate. Damien Helbourne, the Dark Sultan of Al Maajik, is a kind young man despite his ominous name and title. Even the naive, good-natured, and aptly-named Butterfly gets enough characterization to not come across as bland. The characters’ personalities, banter with each other, and love of lampshade hanging are enough to get a player through the story and laugh a little even if it feels shoehorned in for the sake of having a main plot. 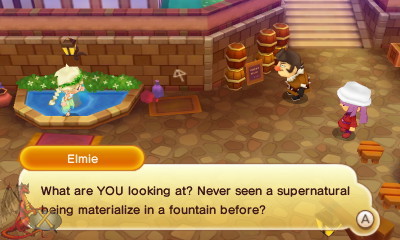 For better or worse, though, the main story by itself will probably take about ten hours and much more game time will be spent pursuing at least one additional Life. Once a player creates a character, he or she chooses one of twelve Lives to start the game. After completing the tutorial subplot, the player can either keep building that Life towards the maximum rank, or change it to another. These Lives are either fighting, gathering, or crafting focused and those within the same group tend to play similarly. Crafting Lives like Cook and Blacksmith involve a quick-paced button-pressing mini-game. Gathering Lives such as Miner and Woodcutter have the player attack ore deposits and trees in order to extract their resources. Performing these actions constantly gets repetitive, although a higher Life rank will make the activities progress somewhat faster. Fantasy Life encourages the player to try many Lives, which helps in preventing the game from getting too monotonous. Many Lives complement each other well. For example, a Mercenary may also want to become a Miner and Blacksmith. A Miner can obtain raw ore, which a Blacksmith can then use to craft better equipment, and this in turn can be employed by a Mercenary to kill something nasty. As long as a player has gained at least a few levels in a particular skill, it is still possible to perform actions from one Life while being another. For instance, a Paladin can still mine for ore or catch fish. Certain high level equipment and skills can only be used by someone of that corresponding Life, though. Swtiching lives is easy, thankfully, only requiring a visit to the Guild Master.

Going back to the combat classes, the battle system in Fantasy Life is a simple real-time affair. The Paladin, Mercenary, and Hunter Lives have the player chain multiple weapon strikes while also being able to hold the A and X buttons for a charged attack. The Wizard Life does not involve combos, but Wizards can assign two different elements to the A and X button as well as hold them for stronger charged spells. While there isn’t much nuance to the battles and they tend to be easy, fights do go by quickly and the controls respond as they should. For a challenge, there are several difficult monsters to be found, though they’re all optional. Two NPCs can also join the player’s party and they generally handle themselves with few issues. A bit of challenge arises from the fact that NPCs will automatically attack whatever is nearby, even if doing so will awaken something like a sleeping dragon that can shred its foes to bits — putting weapons away is the means to prevent such foolishness. 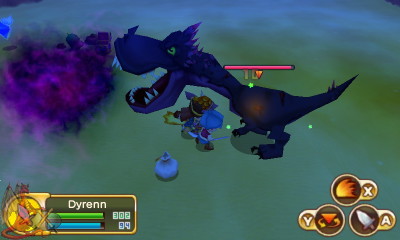 The adorably cartoony art style and colorful environments fit the game very well. The three main regions of Reveria are distinct with their vibrant landscapes and oddly-proportioned creatures and people, making exploring the world quite enjoyable. Despite its apparent impending doom, the world of Fantasy Life is still largely cheerful and whimsical, and the graphics suit it excellently. The 3D effect does not cause any lag, though slowdown can still result if plenty of moving objects are on the screen, and the third dimension doesn’t add much to the experience.

The music was composed by the famed Nobuo Uematsu, and while these often goofy tunes suit the game world, few of them are all that memorable. Players may get tired of the more repeated pieces of music as well. The most interesting tracks are the goofy Japanese-language songs that play once Master rank is achieved in a Life. These songs are appropriately silly and rather catchy. What little voice work is in this game is relegated to battle grunts and shouts.

Fantasy Life could certainly have been better. The main plot could have been stronger or replaced with one better suited to the overall theme of taking on a vocation. The Lives could have been made more distinct from each other. The game could also have stood to be more challenging, though that would likely turn away the younger crowd. What it does excel at, though, is charm and addictiveness. The endearingly quirky characters, visuals, and writing all contribute to that charm. The tasks are quick and easy and while the game can be played in short bursts, the desire to keep completing quests and reaching goals can lead to much longer play sessions, something I’ve done on numerous occasions. Perhaps I’ll eventually get tired of performing the same quick-time mini-game and not care about reaching Legend rank in every Life, but at this moment, I can certainly play for longer. This game will not appeal to everyone, but those who want a different take on a simulator game that strays into RPG territory may wish to start their own Life in Reveria.