The first Evoland was something of a tech demo, allowing players to experience firsthand the changes RPGs have seen over the years, just condensed into a slim package. Shiro Games takes a little bit of that concept for Evoland 2: A Slight Case of Spacetime Continuum Disorder, but actually attempts to make a full-fledged game out of it this time. The result is something that pays homage to many titles over the years, in a wide variety of genres, and keeps coming up with new things to show the player. Some of the things it tries to do aren’t wholly successful, but the effort is impressive.

Evoland 2 begins with a mute, amnesiac hero being awakened by a young woman, named Fina, who brought him back from the forest. Offering the inspired advice that seeing his earlier surroundings might jog the latent memory, Fina escorts him to the woods only to come upon a trio of demons attempting to unlock an ancient artifact for purposes of destruction. After proving skilled with a blade by defeating a challenge summoned by the demons, the hero and Fina wind up transported fifty years into the past, during the war against demonkind. Unraveling this temporal conundrum eventually involves a pair of additional allies and the possibility of ending space-time altogether.

Considering the narrative of the first Evoland was a skimpy clothesline of clichés included for no better reason than to make clear its inspirations, the level of interest Evoland 2 achieves is commendable. Its world is realized well enough to be interesting, and the characters are a likable bunch making their way through its temporal contusions. Evoland 2 leaves a few too many concepts under-explained though, choosing not to make explicit a number of ideas that would have helped in figuring out how things got to their current state. While its text is much less typo-ridden than the first Evoland, this one has enough mistakes to still be distracting. 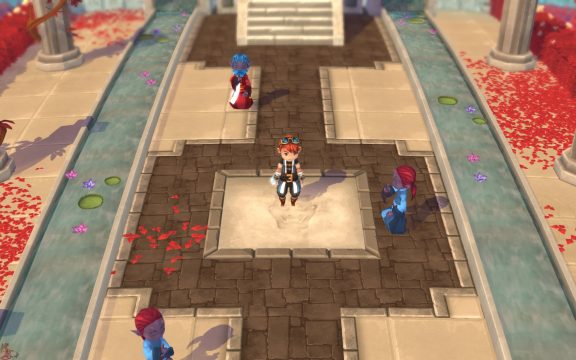 Watch that smirking bearded guy in the back – something’s up.

Evoland was content with creating battle systems openly emulating The Legend of Zelda and ATB Final Fantasy titles, with a Diablo interlude too. Evoland 2 at first seems to be concentrating more heavily on action-RPG mechanics in The Legend of Zelda vein that don’t vary much between the game’s different epochs, but this is merely a cover for the great variety of genres Shiro Games references. As Evoland 2 proceeds, the player will find side-scrolling action areas, overhead shoot-em-up interludes, a one-on-one fighting match, an island governed by Double Dragon-style beat-em-up mechanics, a stealth section, and a continent with multiple tactical battles, among other variants. Shiro Games references a lot of video game history in this title, all the way back to early arcade titles, and the impressive cornucopia of styles on display keeps things fresh until the conclusion.

This is not to say that everything attempted succeeds, because the segments tend to go on long enough that the player will see everything they have to offer. If judged on the merits of the genres being depicted, many of the areas in Evoland 2 would come up a bit short due to lack of variety and repetition. Going through a single quick stage of Space Invaders is one thing, but most of the material doesn’t have that kind of arcade-style brevity.

Evoland 2 also has some technical issues that can make playing it a different challenge than the developers intended. The future portion of the game sports polygonal visuals on the level of recent handheld fare, and also features laggy controls that make any section demanding precise input arduous, along with load times that shouldn’t be present for a title installed on the hard drive. There is also the occasional instance when the game will freeze with no way out but exiting to the menu, which will make players thankful for the autosave function. It could be argued that this technical trouble is an intentional feature from the developer, to properly illustrate a common facet of modern titles, in which case it was brilliantly done. 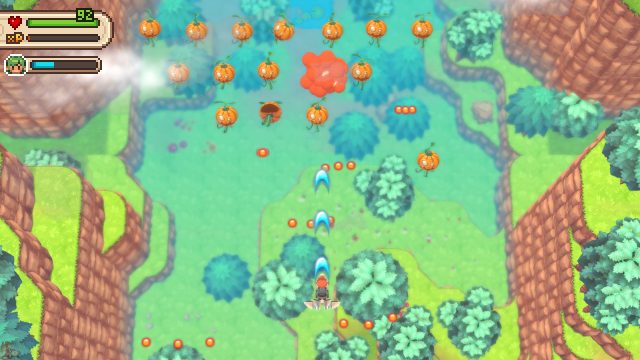 Bloodthirsty pumpkins in a shooter – is this the Silver Surfer influence?

Certain areas of Evoland 2 have the potential to be very difficult for those without good action reflexes, and while save points are plentiful, making it through such regions will prove a great test. The game’s default reaction to death is to let the player immediately continue from the last save point though, and with persistence it is possible to pass all areas. By the standards of action-oriented games most of this title is not particularly devilish, and the RPG mechanic of being able to use a healing item even while shooting armadas in the sky or clobbering hordes of punch-happy opponents helps out even more. Several spots where Evoland 2 gives the player puzzles to figure out have the potential to stymie also, and these often require considerable thought to vanquish.

The time jumps are accompanied by dramatically different visuals, and Evoland 2 conveys them well. Most of the time events will be seen from either an 8-bit, 16-bit, or somewhat contemporary visuals accompaniment, but a few jumps to other styles are accompanied with appropriate graphical shifts. Aside from a trip to a place with Game Boy-derived looks and sounds, the music does not dramatically vary in instrumentation or quality to complement the visual shifts, instead remixing the same tunes for different times. This approach is reasonably effective in its own right, though some of the compositions could have been a little longer considering the length of time that will be spent hearing them. Evoland 2‘s length is drastically different from its predecessor, and finishing it will take somewhere around twenty hours.

Evoland 2 came up with a good way of integrating its graphical changes into the narrative, and succeeds at being a full-fledged game that shifts between the eras of RPGs. I wish every genre it emulated had been a smashing success also, but such was not to be. A quick scene in which the backs of five heroes from titles openly referenced here, depicted as NPCs in a line, serves as a reminder of those other games and how they were more successful at doing one thing than Evoland 2 is at doing many. It’s certainly not a bad game, but jacks of all trades are generally the masters of none, and this one confirms that rule.