Once upon a time there was a tactical RPG that was called Eternal Poison. It was blessed with the graces of being a gothic fairytale and all that the name granted. Unfortunately, the classification carried a great curse. For every aspect of the game that was improved by its dark, fatalistic theme, another was obscured or left malnourished. It is a modern fairy tale, however, and thus has a happy ending: despite its flaws, Eternal Poison stands as a solid entry in the world of traditional tactical RPGs.

One of Eternal Poison‘s major points of deviation from the tactical RPG formula is in the way its story is presented. Upon starting a new game, the player is confronted by three stories, each focusing on a separate group of characters. These segments take about ten hours to complete; fulfilling certain conditions within a story will unlock an additional two chapters. Each gang of characters is linked by the shadowy maze Besek, which has suddenly appeared in the prosperous kingdom of Valdia, but their goals are their own. Despite the unique party dynamic connecting each set of story characters, major events in the three main storylines closely duplicate one another. While this enhances the sense of being caught within a diabolic mystery that is key to Besek’s environs, the conceit can wear thin. Side characters frequently allude to events that would benefit from being further fleshed out, but remain under-developed due to the setting’s siege mentality. It is here where the twisted path through Besek becomes relevant.

Before each battle, the player is given the choice between one to three paths to follow. This creates the illusion of a far more elaborate story structure than there actually is. Each story has a bad end as well as a good one, which is triggered by participating in a single, specific battle. Knowledge of the paths allows the player control over which foul beasts (or Majin) and treasure will be in the next fight, but leaves the dialogue and story generally untouched.

As a result of battles driving ever forward, there is no opportunity to grind for experience points. While this means that it is possible to find oneself in a situation where there is no mathematical way to triumph in a battle without reverting to a previous save, the gentle experience curve and near-sighted AI make such situations unlikely. On the other hand, players may receive grinding flashbacks anyway, as they lead the same mercenary characters on the same maps, spread over the course of several characters’ stories. 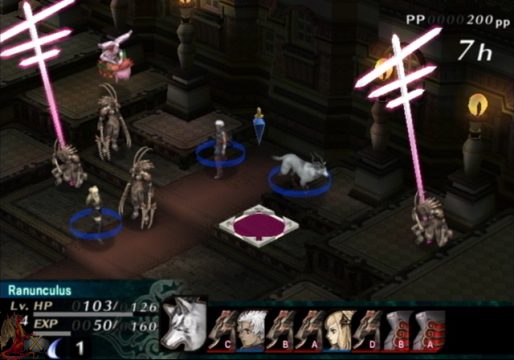 The battle system is straightforward for a tactical RPG, but not without its quirks. The first point of interest is the Lead command available to the main character of each story. It allows characters who delay on their own turns to act instead on the leader’s, representing his or her mastery of small scale tactics. The secondary function of the Lead command is to allow combo attacks. These two-person attacks have several advantages over two separate attacks, one of which is the increased ease in capturing enemy monsters.

Although capturing monsters and forcing them to fight for the other side has a long, heroic tradition, Eternal Poison makes it seem natural. Never does the option to bind monsters to one’s will seem like an exercise in obsessive-compulsive bookkeeping; rather, it’s good strategy. Monsters who receive a set amount of massive damage beyond what is required to defeat them can be captured within a magical tome. From there they can be summoned on the battlefield, sold to a friendly witch, or (in a gruesome display of blades and gears) juiced to provide useful battlefield skills.

A major aspect of each battle is making sure that the party is diverse enough to handle any threat. Most Majin have distinct strengths and weaknesses against the six elemental spheres and three types of weapons. In practice, this adds an elaboration of the rock-paper-scissors dynamic to the field. Any assault that doesn’t begin with a visit to the enemy units’ status screens could easily result in minimal damage — or worse, providing aid and comfort to the enemy. Pulling up each status screen individually is a minor interface annoyance, but hardly a game-breaking one.

Swapping equipment contains a more salient concern. For such an oft-repeated interface, menus and repetitive button pushing swamp it. Optimization, the only way to survive many of the battles, requires tweaking the party’s equipment and skillset after every clash. The process allows for great customization, but rarely is there room for difficult decisions; one option is nearly always better than the other, making most of the minutiae unnecessary.

Each character has two slots for status effects: one physical and one mental. If the slot is filled by a negative status effect, it cancels the positive buff as well as preventing any further positive effects from entering the slot. This design choice quashes the prospective tactic of loading one character down with beneficial spells, but transforms what remains into a valid strategic axis. Characters are not straight jacketed into their buffs, but neither are they given free reign. 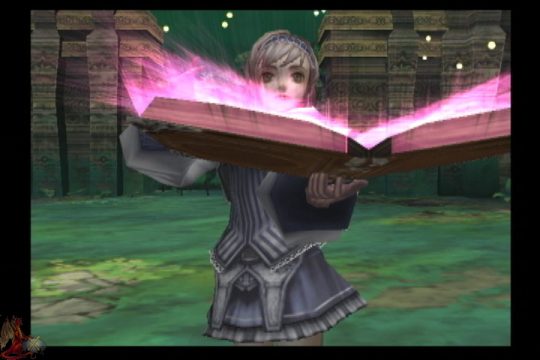 Books are a pathway to adventure; tomes even moreso.

Character art is evocative and effective in communicating Eternal Poison‘s unique sense of style, but the transfer to in-game elements is not perfect. Character sprites are blurry, lacking in detail, and pale in comparison to their more fully realized stills. The few cut scenes fare better, but they’re not an integral part of play. Combat animations are a little off, but their greater sin is length. The option to turn them off is available as well as recomended. It’s easy to excuse these lapses of quality however, especially in light of the all-around excellent aural experience.

Takashi Okamoto’s score is very good, suitable for listening to apart from the game as well as during. Ranging from operatic and light jazz to more boss battle appropriate rock, Besek’s sounds prove to be as mutable as its walls. The multiple battle pieces are greatly appreciated, breaking up the frequent calls-to-arms of the tactical RPG world with more setting-appropriate works. Battles are further embellished by the vocal introduction of each Majin. The first time that the player encounters a Majin, a mourning wail reveals the creature’s name. It’s weird, but entirely in tune with the region’s ghostly ambiance.

Eternal Poison‘s voicework follows its score in excellence. Johnny Yong Bosch’s turn at Olifen, the reluctant commander, and Doug Erholtz’s weary, conflicted Logue are standout performances, although not the limit of the casting director’s good choices. Quirks and inflection in the voice work flesh out the script in the between-battle story scenes, transforming the lush still images and acceptable text into believable characters. In-battle dialogue does not benefit from the same degree of polish, but is thankfully short.

Eternal Poison is a suitable capstone to the PS2 era of tactical RPGs. It has taken enough cues from its predecessors to prove that there is still enjoyment to be found on the system. The limitations of the story and repetitive nature of the battles mark the game as far from perfect, but nevertheless worthwhile for fans of grids and stat-juggling.