Last year I had the pleasure of reviewing my first Kemco title. I didn’t like it. So, dear readers, you clearly must wonder why I would be reviewing End of Serenity, a Natsume-published Kemco title. The answer: I am a glutton for punishment. Although to be fair, End of Serenity turned out to be a rather comfortable experience, though rather average. Thankfully, it is also nowhere near the specialness that was Grinsia, a.k.a. the game that crashes every ten minutes.

End of Serenity puts players in the role of five different protagonists, each with a different reason to save the world. Each protagonist has been directly affected in some way by a mafia group known as The Underworld, who are gathering powerful atomigems for some sort of nefarious reason. Since this is a Kemco title, the plot is bare bones and straight to the point — you go on a quest, you save the world, and you slay a bad dude at the end — and straight to the point — there’s a quest, a world to save, and a bad dude at the end to slay. What the game should be given credit for is that at least Natsume attempted to add some flavor to the text in an attempt to leaven this otherwise simplistic story. The localization is good at providing some needed personality to the narrative and its cast, but the game’s linearity spoils this somewhat because the majority of the text is pure exposition. 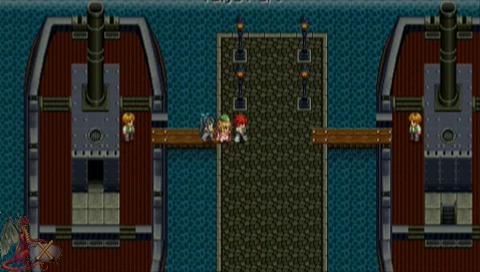 Man, I didn’t realize getting through immigration would be this easy.

Those who love classic SNES RPGs will enjoy the visual aesthetics of End of Serenity. Much like other Kemco titles, the game’s design is a love-letter to early ’90s RPGs, and it makes no bones about that in its presentation. There’s quite a bit of palette swapping, which is to be expected, and none of the visuals will blow players away, but the comfortably familiar look will trigger pleasant memories in older gamers. The game’s visual style and simplistic, turn-based combat make it — much like Grinsia — a generic and uninspiring experience. While it plays like comfort food for those who have grown up on ’90s RPG classics, it lacks any sort of originality that would make it stand out on its own.

Combat is a simple turn-based affair wherein the player selects the skills for the character to perform. Characters have familiars that can be used in combat to unleash more powerful skills and attacks, though a gauge must be filled before a familiar can be used. Interestingly, skills have to be bought in towns and are not earned through leveling up. It means that more than one character can have the same abilities, though they are still gated to some extent. An example comes in the form of magical abilities, with most healing magic reserved for the three female leads while the rest of the skills are free to be assigned to anyone. It definitely adds a little more customization, which allows for some mixing and matching of skills. Outside of this aspect, the game’s turn-based combat system is the tried-and-true one seen in classic RPGs, without a lot of bells or whistles attached. Still, it’s a serviceable battle system and for what the game attempts to emulate, it works. 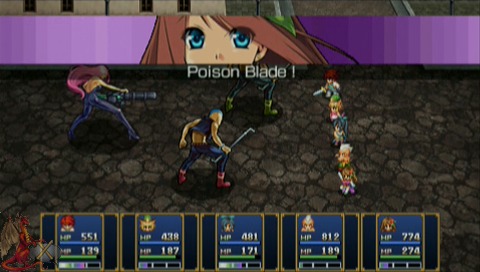 Kaede will kick your butt.

The same can be said for the game’s audio, which is good but doesn’t really stand out in a crowd. The game doesn’t have a lot of music to speak of, so players only get to hear a small sampling of tracks. End of Serenity is also a short RPG, clocking in at under fifteen hours to complete, and it’s not a particularly challenging game either. In fact, regular encounters are a breeze to complete, and boss fights don’t really provide a difficulty jump for the player either. Still, even though it’s a short game, it’s one that knows its place and doesn’t attempt to outstay its welcome with unnecessary padding.

And there you have it: End of Serenity is a game that plays like comfort food, but doesn’t excel at very much. It’s a game that I don’t think deserves the $14.99 price point, but at 5 bucks you can get some easy enjoyment. End of Serenity is a simple, generic experience that you’ve played before, but unlike Grinsia I enjoyed my time with this game a bit more. It makes me wish that Kemco would try a little harder in making a different kind of RPG, because the developers there are just making the same game over and over again, and it’s getting really stale. It just doesn’t inspire much confidence.

Brigandine: The Legend of Runersia