I Am a Fruit, I Am an Island

The Nintendo DS certainly had no shortage of odd little games of niche genre or theme. Name it, and something reasonably similar had probably been done already. An invasion of alien soccer hooligans? Got it. Running mazes like a loli-goth Pac-man? Yup. Cosplay-based tactical action? Multiple instances across several platforms. But now, let us ask a seriously specific hypothetical question: would you as a gamer ever be interested in playing a portly, fruit-themed druid in charge of a small army of woodland critters, leading them in the world’s cutest ever zerg-rushes against miniature mecha bent on global deforestation? If the answer, despite all odds, is “yes,” then the Ecolis games are for you. The first of the series was released overseas as Eco-Creatures: Save the Forest, but today we are discussing its Japan-only sequel, Ecolis: Aoi Umi to Ugoku Shima (Isle Moving on the Blue Sea)

In the first game, a hefty young member of the magic-using forest tribe, the orange and fuzzy Durian, had to defend his homeland against the misguided practices and priorities of the neighboring human kingdom. By the end, peace was made and ecological disaster averted. The sequel finds Durian training his own apprentice, the enthusiastic Duribo. But then, from across the wide sea come the clockwork forces of the Mega Mecha Company, whose president is determined to expand, exploit, and expend every mana resource his minions can find in order to further his plans. The magic-using races of the far isles are merely annoying monsters, as far as he’s concerned, and he has no qualms about stealing the very source of their power: the Mountain God who lives in the volcano. This very nearly destroys all magic on the island, but Durian voluntarily transforms himself into a mana tree capable of taking up the slack and keeping the magic flowing, for a time at least. It’s up to his apprentice to search the seas for a new Mountain God before this stopgap measure wears out.

Here’s the first point where this game goes beyond its predecessor: there are five major islands to explore, as well as a few minor ones. Duribo’s people cannot normally leave terra firma, but with the help of his friends in the kingdom next door, he’s able to travel in style atop his very own artificial island. Soon he’s going where no short, orange, fuzzy thing has gone before, and along the way he makes some friends: the shell-headed Maki-Maki, the feline pirate queen Konuko, the rusty robot Gabby-G, and the simple-minded Nazosamara. Each of these characters is playable, though some battles have pre-set participation, and they bring several new unit types to the mix as well as interesting individual powers and movement capabilities. 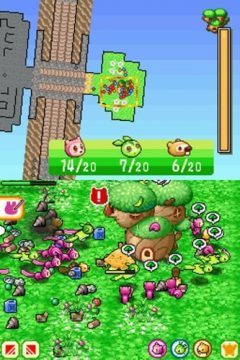 Revenge of the Squirrels!

This series is a bit of a hybrid, filling its own special niche in the RPGestalt as a combination of real-time strategy and role-playing game. On the average stage, the player is tasked with eliminating all enemies, sometimes with time limits or other secondary failure conditions, and in order to succeed he or she will need to summon up small hordes of the eponymous eco-creatures at the base camp’s treehouse, using up large amounts of mana in the process. The mystical critters will follow the active hero character around until they are distracted by enemies, but can be called to heel with either a touch command or a press of the Y button. While much of the action perforce requires the touch screen, a decent portion of it can also be accessed with buttons, making it easier for the player to manage multiple actions at once. The touchpad can toggle between critter control and hero movement guidance, but the game also allows the player to run around with just the D-pad as a default. Wrangling minions is as easy as drawing a circle around them, then tapping a target, while special ability menus are similarly accessible through simple touches. It’s an easy enough system to handle, but for the true novice the game also provides some comprehensive (and totally optional) tutorial stages with every new element or character added in.

Most battles may be of the standard “kill everything” variety, but the major plot event stages always have some interesting quirks, from environmental hazards to non-enemy targets or tasks. Battles against bosses late in the game tend to be more annoying, however, especially in the last run of battles leading up to the game’s final boss. In those, it’s all too possible for a giant mecha to simply rush the player’s treehouse with all its little robot followers in tow, well before the player has enough mana stocked up to build a defense. As this is a drastic change of battle pacing from the norm, it definitely will catch people by surprise.

There is a total of twenty-four unit types to call upon in battle, though most have to be discovered independently of the game’s plot. From those, the player chooses three to accompany the hero into battle. Some stages require certain units to be included, and others strongly incentivize it, so there’s impetus to experiment and build up different critters. The basic three types, held over from the first game, are the Ecolis (squirrel), Ecobea (beaver), and Ecomon (flying squirrel / sugar glider), each of which comes with four unlockable variations possessing unique abilities. For example, while all Ecobeas can swim and build dams, Waibeas can produce dams of triple width, Daibeas get speed and attack bonuses in water, and Shinobeas don’t appear on enemy radar in wifi matches. The three critter types introduced with the new heroes also have special skills to take into account, as do their masters, which makes for some good variety.

Leveling is done by mana crystals, which come in a variety of special flavors. The heroes can increase their health or mana capacity with character-specific crystals found during or after battles, while the basic critter crystals can be gained as bonus awards for finishing levels faster. More advanced crystals can either be made at a magic pond on each island, or by harvesting them off of trees grown in battle by the Ecolis. This last is also an excellent way of gaining bonus critters to expand one’s army (max of twenty per type).

In addition, there are the recycled Eco-Mecha. Using the special Recyclotron, Duribo can take the junk he collects while cleaning up the world and convert it into cute little robots. Unlike living critters, Eco-Mecha don’t require mana to appear in battle, but their numbers are more limited, and once they’re busted, they’re gone, and Duribo will have to put together more after the stage is complete. On the plus side, even the least powerful of the six mecha types has a higher defense than any eco-creature, and their own suite of special abilities can come in handy. 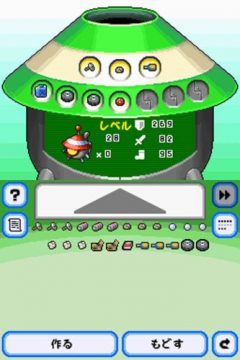 There are several sorts of side quests and mini-games available throughout the game. Over the course of the story, more than twenty free battles are unlocked for extra challenge and salvage, but there are also rescue missions, explorable areas, junkyards to clean, mana crystals to collect, pollution to be combatted, and areas where trees need to be planted. Each of these has its own innate quirks, such as time limits or natural hazards, and the rewards vary. In some, Duribo must figure out how to get all the eco-creatures on the map back to a safe zone, usually through the extensive use of their powers, while in others he must race against the clock to eliminate all the enemy robots harrassing the critters. This usually involves pushing them into pit traps. The stages with junk- or gem-collection tend to be more action oriented, with hazards like spring-loaded ivy or spike traps getting in the way. The most annoying side bits are the pollution levels, where Duribo has to bounce corrupted critters into purification circles before they can destroy the home tree, but this turns out to be incredibly difficult just from the numbers involved, not to mention the unreliability of the bouncing mechanic itself.

Graphically, this game does little to stress the DS’s processors, preferring simple and cartoonish sprites over any great level of detail. This generally works in its favor, as otherwise there might be a lot more slowdown in later levels, especially in one of the final chapter’s boss encounters where as many as one-hundred twenty units might be wandering the map. As it is, everything runs quite smoothly. The only oddity is that there are six characters, mostly major, mostly villains, who do not possess in-game polygon sprites. Instead, when they speak up in battle it is only through the dialog portraits. While this is adequate, it’s a little disappointing for a game where two-thirds of the cast is able to emote through body language as well.

The music definitely reflects the game’s action and platformer antecedents more than the RPG side, which means that the BGM is bouncy, fun, and okay for the average length of a game stage, but nothing worth listening to on its own merits. The sound effects are cute and well done, at least.

Ecolis 2 is by all appearance a game that built well upon the foundation set by its predecessor. While it’s unlikely to satisfy the experienced RTS fan or RPGamer, it’s a fun little romp that seems fitted to its target demographic of grade schoolers, with the cartoony graphics, Saturday-morning plotline, and strong environmental message. This is definitely a title to recommend to younger gamers wanting to dip their toes into slightly more complicated genres, and more experienced folk will appreciate the fact that almost all the tutorials are completely optional. It’s sad that this one never left Japan, since there’s nothing really wrong with it, and lots of things that are right. Unfortunately, it has become just another oddball DS title lost in the cracks, with little hope of ever getting recycled or redeemed for foreign markets.