Capcom’s library of arcade brawlers in the ’90s included a variety of decent licensed titles such as Alien vs. Predator and The Punisher. Near the end of its brawler lineup, the company developed a couple of titles with the Dungeons & Dragons name: Tower of Doom and Shadow Over Mystara. Except for a Japan-only Saturn port that continues to command high aftermarket prices, these two games were exclusive to the arcade until a recent port to multiple digital outlets made it easy for the curious to experience. Dungeons & Dragons: Chronicles of Mystara is clearly a beat-em-up at heart, but it ventures much closer to the RPG world than most of its brethren in the ’90s did, and is worth experiencing today.

The action in Chronicles of Mystara looks like many other beat-em-ups from a distance, and indeed the visceral, reptile-brain joy that comes with slamming opponents into the ground is a key ingredient. The character roster is a collection of Dungeons & Dragons classes, and this means that each one plays distinctly. Magical classes gain a certain number of charges for their spells, which tend to be more effective than fists for inflicting pain upon the enemy, but otherwise everyone plays by the same rules familiar from Final Fight and Streets of Rage: march forward, beat the life out of every opponent in the way, and march forward again. A temporary dash mechanic exists, and the ability to hit prone opponents before they get up again is entertaining, but the essence is similar to many other brawlers of the time even though the opponents are lifted straight from the Dungeons & Dragons enemy roster.

Things are more complex than the usual beat-em-up, starting with the arsenal of weapons that can be acquired and subsequently thrown at the enemy to deal damage. Such sundry damage dealers are still affected by action mechanics, but toting projectiles around for later use is unusual by brawler standards. Treasure chests are present with a variety of desirable contents, and some of them won’t open unless the player is either playing a thief or has a key. Route branches are present throughout, giving considerable replay incentive due to the great variance between the paths. Characters also gain money from fallen foes along with experience that permanently powers them up, though it generally won’t assist survival against the nasty opponents for which arcade games were known. By modern standards these elements are not revolutionary, but in the gaming landscape of the mid-’90s such things were much more unusual. 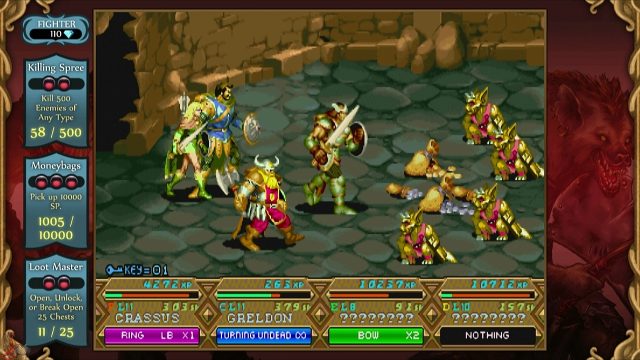 Why hello there, goblins! We’re going to take this money from your cold, dead hands. Cheers!

Chronicles of Mystara still displays its arcade roots constantly however, and not all of them are for the better. Countdown screens when entering character names or making choices certainly bring back memories of making each coin count, but keeping such artificial restrictions today is not endearing. Instead of balancing the abilities, Capcom elected to port the arcade rendition and simply let the player continue as many times as desired. While different difficulty levels are provided and the game’s punishment of taking away all gained experience in a stage contribute to challenge, altering a few of the traps and bosses to be less horrendous in the way of classic arcade games was also a possibility. Having to sort through the many expendable items and spells in real time while enemies eagerly pursue the player is also not ideal, but at least is in keeping with the need to have a fast pace throughout. The major alteration made for the modern experience is the insertion of numerous achievements, which is somewhat engaging but not everything one might desire.

Though similar, Tower of Doom and Shadow Over Mystara were originally released several years apart. Tower of Doom only has four characters to choose from, and character movement is somewhat slower. Shadow Over Mystara broadens the roster to six, and its default speed is noticeably faster. The essence of what Capcom’s developers came up with stayed the same, but the latter game shows enough enhancements to make it the preferable title if the player’s time is at a premium.

Neither game features a narrative that will transfix the audience, though in both cases it is more substantial than the typical beat-em-up. Aside from the branches to different levels where the player has a choice, the story in Tower of Doom reveals an evil mage named Deimos out to prove his horrible nature by doing nasty things, and Shadow Over Mystara portrays a nefarious shapeshifting foe at the end similarly out to destroy all good in the world. By the standards of arcade brawlers, having these foes speak a little is progressive and interesting. This minimal story structure is done no favors by having a translation in keeping with Capcom’s work with its fighting games of the period, which produced many unintentionally humorous lines but rarely kept players interested beyond that. 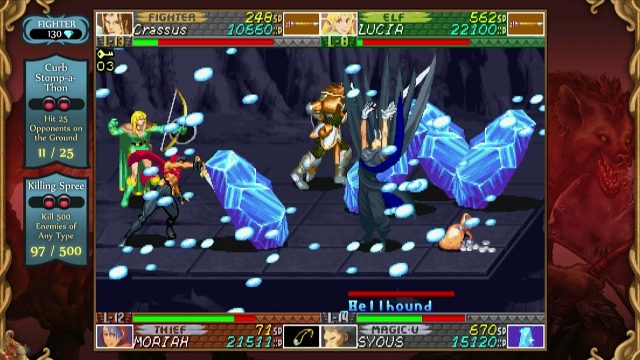 Get all this ice out of my way, I can’t see the hellhound anymore!

Aside from some tweaks to the controls, the quickest way to tell Tower of Doom and Shadow Over Mystara apart is through the visuals. The former displays strong sprite work to be sure, but the latter game’s 1996 release ensured it would receive the pinnacle of Capcom’s prowess in 2D animation. While not necessarily dazzling by the standards of today, this work has held up quite well over the years. The music is varied and effective without being terribly memorable, while the minimal number of voice acted lines gives players plenty of chances to try figuring out what the muffled-sounding words actually mean.

I regret not having tried to get other people in on the game, since beat-em-ups reach a higher plane of enjoyment when experienced with others. Even so, this compilation was a fun way to spend a couple of evenings. It’s not an easy recommendation for someone interested in titles closer to the usual idea of an RPG, but brawler fans who haven’t checked it out yet have no reason not to try.