Dungeon Siege III marks the first entry in the series to be developed by Obsidian Entertainment, and also the first numbered game in the series to appear on consoles. More specifically, Dungeon Siege III largely abandons the play style of the earlier games to focus on mechanics more palatable to a console audience. Ditching the tactical, large party combat of the original games, this new entry instead provides fast paced hack-and-slash action with a party of two in single player or up to four in multiplayer. Despite a few hiccups in multiplayer, Dungeon Siege III more than accomplishes its goals, providing a short but exciting adventure that manages to bring something new to the hack-and-slash action RPG formula.

Set in Ehb, the same kingdom from the original game, Dungeon Siege III takes place one hundred and fifty years into the future where the famed military force known as the Tenth Legion has been destroyed by the mysterious Jeyne Kassynder. Kassynder claims the Legion murdered the old king, and it’s up to the player, as a descendant of an old Legionnaire, to help reform the Legion and end a civil war between Kassynder and the Queen. The setting goes for more of a steam punk style than the previous entries in the series, with guns, cannons, and magical automatons a typical sight.  For series veterans it really helps enforce the feeling that a long time has passed since the first game.

The story is certainly more in-depth than one would expect to see from an RPG of this type, offering more than has been seen in previous series games. Voice and dialog, while not outstanding, prove to be quite good, and a welcome break from combat. Obsidian even manages to work a bit of choice into the storyline, though the consequences of most of these choices don’t show until the ending scenes. It’s still a nice touch that gives the player the sense that they’ve had some effect on the future of Ehb and adds a bit of replayability to the adventure.

Hack-and-slash games are very combat focused, and thankfully this proves to be the strongest and most original feature of Dungeon Siege III. Ditching the traditional methods of mana and health regeneration, there are no potions or healing items of any kind in the game. Instead, the game’s equivalent of mana, focus, is regenerated as the player connects with regular attacks.  Power spheres that can be used for healing and buffing are also regenerated through standard attacks. This forces players to stay engaged in combat and use strategy rather than diving straight in and relying on healing items.

Power spheres can be used for advanced versions of character’s abilities as the game progresses. Players start with one of these spheres, but gain more over time. This may seem like a simple change, but it serves to make combat incredibly engaging. Players need to stay in the fray of things to generate the fuel for their abilities. With most encounters involving large groups of enemies, players will need to effectively use everything at their disposal, from dodging and defensive abilities to offensive attacks. 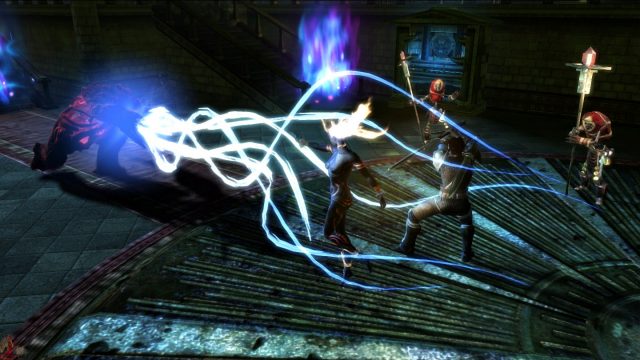 The different play styles of the characters complement each other nicely.

The four playable characters offer a variety of ways to stay in the mix thanks to each having two different attack stances to utilize. Each stance has three abilities for players to learn along with a different kind of basic attack. Switching between these two styles is quick and easy, keeping the pace of combat, and of the game in general, very quick. The four main characters somewhat fit typical stereotypes for RPG characters, though at least doing so in a style befitting the game. First is the wizard, a character with singular and group magic. And as a nice change, the wizard features a teleport instead of a roll for dodging. An archer type is a character who has traded bows in for guns, switching between a long range rifle and a shorter ranged pair of hand pistols. The warrior seems the most typical of the four, switching between sweeping two-handed sword swings and basic sword and shield attacks. Last is the most original of the group, a unique character who switches between staff attacks and fire wielding Archon form complete with magic and a teleport dodge similar to the wizard.

Despite fitting most typical stereotypes, these characters do play quite differently, offering a vast array of playstyles and even unique names and personalities beyond just a generic class title. When leveling players are free to learn abilities however they choose. They also are free to choose whether or not to strengthen abilities. This can change a character build to the degree that even same character will play quite differently. In addition to these choices, players at each level can choose various proficiencies to level, ranging from adding a slowing effect for enemies caught in the path of a wizard’s teleport to simple stat increases during level ups.

The only thing that serves to slow down the great pace of the game outside of leveling up is grabbing and examining loot. Since there are no healing items, loot only takes the form of money and equipment. Equipment management is handled with a simple and easy to use interface, dividing equipment by type and clearly showing the player what stats and abilities each piece of equipment offers. Helpful base attack and ability damage per second stats are shown on this screen as well, to show the player the overall effect on damage output. The highest damage per second isn’t always what players will be looking for however, as many weapons offer additional effects, such as draining life from enemies. It makes searching for and finding good weapons quite exciting, though it doesn’t lead to much visual change on the actual character model, which is disappointing.

Outside of combat there isn’t much to do besides shopping and completing side quests. This ends up serving the game well, keeping the player always moving to some new objective, with non-combat areas mostly serving as brief respite. The game is linear, though players are free to go back and forth to the various areas open to them, completing side-quests or just hunting for rare equipment. A trail of orbs can be summoned at any time to help point the player to the next objective on whatever quest they currently have selected. It’s a nice feature, and certainly not required for those who like to figure things out on their own. Though there is a mini-map which nicely highlights objectives near the player, there is no way to call up a larger area or world map, which can make exploring without the trail of orbs difficult at times. Overall, Dungeon Siege III provides enough side objectives, along with some primary quests that can be completed in any order, to prevent the game from feeling too linear. 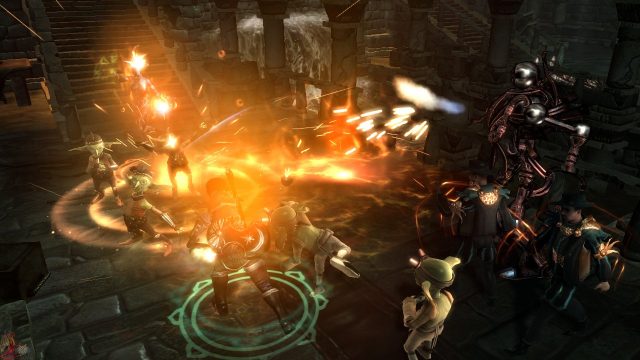 Combat is a frantic and fast-paced endeavor.

In the area of graphics, Dungeon Siege III doesn’t push the hardware of consoles and PCs to any great lengths, but has a good style to it. The reduction in graphical quality does serve one purpose in that it allows the game to continue the series tradition of providing a seamlessly connected world with virtually no loading times between areas. Monsters and characters animate quite nicely, especially many of the game’s larger boss monsters.  This stays true even with massive amounts of enemies on the screen at once; with the game never showing any kind of noticeable dip in frame rate. Spell and ability animations have a great flare to them, effectively highlighting how strong the player’s character is. There’s nothing spectacular here, but thankfully also nothing that detracts from the gameplay.

The music does a great job of fitting the current mood for the game, providing many exciting orchestral pieces. Many of the pieces aren’t particularly memorable, but nothing musically ever stands out as a negative. Sound design is quite good, with enemies producing all kinds of different cries and attack noises, and most abilities and attacks serving to be quite audibly enjoyable. Like the music, there’s nothing here that’s particularly original, but it is all well done. The combined art style and music serve to give the game a nice polished feel. Something that will silence most critics of Obsidian is that the technical issues that plagued some of company’s previous efforts are not to be found here.

Dungeon Siege III does disappoint in one area, that being multiplayer. Given that there’s no post-game content or new game plus option to take a developed character to a harder difficulty, it would have been nice if the multiplayer mode allowed players to continue to develop their characters. Instead, players can only use characters from the host’s game, and no two players can use the same character. After an early patch that fixed connection problems, there are no major performance issues with four players in a game, so the technical side works well enough. All characters need to be on screen at once, which is typical for this sort of game, and thankfully it provides a way for players to switch their character to AI control if they need to step away from the game. Despite the restriction of all players needing to stick together, only two players are supported on one system at a time, which is a baffling and annoying restriction. While it certainly offers lots of options for players to play through the game in co-op fashion, the design decisions leave a lot to be desired.

Dungeon Siege III ends up being a fantastic hack and slack adventure that nearly achieves brilliance if not for lack of post-game content and expansive multiplayer. The battle system is one of the best that the action RPG genre has seen in years thanks to a healing and ability system that require the player to stay engaged in combat. Thanks to an interesting story, great pacing, and four vastly different playable characters, there are plenty of reasons to replay the adventure more than once. Though the changes may alienate series veterans, anyone that goes in with an open mind will be treated to one of the best hack-and-slash RPGs this side of Diablo II.