Had the Pokémon Creators Battled Insects Instead of Collecting Them

Prepubescent bug aficionados Yamato and Tsubasa are frolicking merrily in a field, getting giddy over butterflies and beetles, when the insects start speaking to them in perfect English. They are alien bugs who teleported across the universe in search of humans, the only species capable of saving their planet from the diabolically named Black Swarm, and they want Yamato and his friend to volunteer for a one-way warp across the stars to lead them in battle. The male child eagerly leaps head-first into the plan while the female child tentatively follows. Fortunately, this game is titled Drone Tactics, not Drone Story, and once the opening plot nonsense is complete, a fun tactical experience begins.

Drone Tactics is the latest tactical RPG developed by Success, arriving as part of a throng of Success games invading America in 2008. Although the developer has created dozens of Japan-only games over the last couple decades, it just started courting US gamers recently with the Izuna series, Rondo of Swords, and the upcoming Operation Darkness. If Rondo of Swords combined a traditional premise with unique gameplay mechanics, then Drone Tactics flips the script by keeping the gameplay traditional while taking the setting somewhere unique.

The plot aspect of this unique setting should be ignored as it exists for only one reason: to awkwardly rationalize the existence of large, mechanical war bugs. Whether or not the player is a fan of arthropods, monster truck rallies, or robots is inconsequential; the combination of the three is implemented in a universally awesome manner. When two units collide in battle, the top screen displays a tight camera shot of a metal insect smashing into its opponent. The realistic 3D rendering of the bug-vehicle is of the highest DS quality, and the featured drone takes up the entire screen.

There are over a score of drone types, although the player only obtains one of each kind, and each drone has three weapon slots. By name, the three slots are for a melee weapon, a gun, and a cannon, but drones can equip stat boosters instead of weapons if the player so desires. This allows for a high level of choice in how defensive, offensive, versatile, or specialized individual bugs are in battle. All weapons and power-ups are displayed in the drone’s 3D image, and the effect is outstanding. Switch the rhino beetle’s melee weapon to a buzz saw, and its characteristic, but not particularly awe-inspiring, horn will be replaced on-screen with a giant serrated buzz saw. Conversely, equip the fragile butterfly with defense-raising armor in its melee slot, and a large fender will appear on its face instead of a proboscis. Success provides cosmetic customizations too; each drone’s primary color, secondary color, and eye color can be selected from a palette. The marriage of strategic and aesthetic changes is most noticeable in the aforementioned, fully animated 3D duel sequences when the drones are displayed in action. 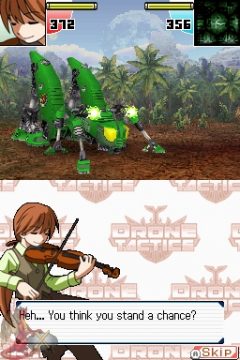 All the machine shop customization delights in the world would be nothing but filler and fluff without a solid tactical game at its foundation. The bottom screen displays a tried-and-true, toony, but functional, 2D battle grid. The gorgeous 3D drones are represented by sprites here. For the sake of visual clarity, these sprites do not reflect equipment and color modifications, and this is a welcome design choice. A drone may engage any adjacent enemy using either a melee or gun attack. Melee attacks are generally stronger while gun attacks are more accurate, but if the defender counterattacks, it must use the same weapon type as the attacker. Therefore, units with poor defense are often best suited for guns so that the enemy cannot return with a crushing melee counter. Instead of counterattacking, the defender may choose to defend or evade. Defending always lowers the damage received, and it has a greater effect if the unit has a high defense value. Evading may or may not reduce damage, depending upon luck and the unit’s speed, and if the attack is completely dodged, the defender will take no damage.

Battles can become overly defensive affairs. Defense raising and HP regenerating terrain effects along with the AI’s habit of infrequently counterattacking, and thereby rarely leaving its drone vulnerable to the offensive hit, lead to most of the player’s attacks either landing for chip damage or whiffing entirely. Rather than institute a rock-paper-scissors mechanic to break gridlocks, Drone Tactics provides some bugs with a form of tribal attack bonuses. While most insect types have a statistical strength, such as higher attack power, accuracy, or defense, a smaller number of them also gain an attack boost when they duel either a ground or flying drone type. A praying mantis’s melee attack deals extra damage to flying units. Dragonflies’ guns punish ground units. This implementation smartly encourages tactical thinking, since both ally and enemy drones can have these advantages. 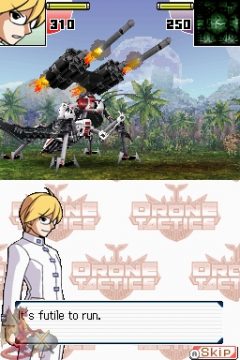 When an enemy needs to be destroyed immediately, or when even the player’s strongest drones are merely nicking a particularly well-entrenched foe, cards can be used to vastly increase a unit’s power for one attack. Cards are Drone Tactics‘ take on items and magic. Their effects include teleportation, healing, and temporary stat raises. A deck of twenty cards is prepared before battle. Each card can only be used once, but it is restored once the battle is over. While this sounds fine and dandy at first, there is an unusual and unfortunate twist; all cards which affect bug battles require the player to successfully win a microgame against the AI in order for the card to work at full effect. The microgames are short, simple, and skill-less, but they all require the stylus to play, and while it seems like a novel idea at first, after a few hours it becomes groan inducing. It gets even worse once enemies start using cards, especially since bosses are nearly impossible to defeat in the microgames.

The interface is far from perfect in other ways; a few of the interaction choices were poorly made. When drones level up, stat increases flash on the screen for an instant before vanishing. As a result, it is difficult to gauge a drone’s preset growth, and hence how best to use it in battle, especially early in the game. Once a target is selected for the “attack” command, the attack-type selection menu opens and the player cannot back out to issue the drone a different command. This, coupled with the unavailability of the enemy’s full statistical information in this screen, is an inexcusable oversight. If the player selects “attack,” then remembers he meant to do something else first, the command cannot be canceled. If the player wishes to double check the target’s stats to better choose the attack type, tough luck. The same issue applies when defending; only a minimal amount of information is displayed when the player needs to decide whether to counter, defend, or evade. There are also no confirmations for orders in the game. A positive result of all this is that battles are extremely fast paced for a tactics game, however when one needs to slow down and tread carefully, the haste-encouraging design choices are detrimental to the tactical nature of the game. 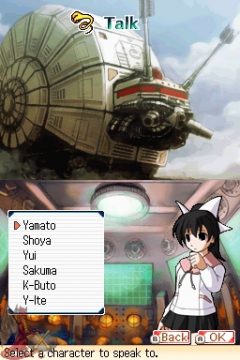 If only all the story sequences were optional.

The pedal-to-the-metal mindset works much better elsewhere. The AI takes its turns blindingly fast. The 3D duel animations on the top screen are short, but still skippable for the impatient gamer. Most importantly, all story sequences are also short and skippable. It is not so much that the plot is awful or an insult to read; rather, it is uninspired drivel with no effort spent on character or plot development. Each main story battle takes place in a new chapter. Dialogue between chapters always consists of a dozen generic exclamations followed by someone pointing out that enemies are attacking again. Oddly, there is a menu option to have the characters talk to each other between battles, and these conversations are significantly longer than the plot segments forced upon the player, although they are equally insipid. Even the 2D character art displayed with the text is affected by this lack of effort. Each person only has two or three poses while speaking, and staring at the same drawings all game gets old. Also on the topic of things that get old: the three or four different background scores are all bland and have short loops. This is a game meant to be played muted while listening to something more entertaining.

The overall package is extremely user friendly. There are three difficulty levels with “normal” feeling slightly too easy until the final stages of the game. At any time the player may abandon the storyline stages to play through optional levels in the Badlands. These nonrandom stages are smaller and often less difficult than the storyline ones. Aside from gaining a minimal amount of experience and lengthening the game time, the many unique and powerful items found exclusively in these stages serve as incentive to play them. Ultimately, there are over twice as many Badlands levels as there are story levels, with the toughest Badlands levels being considerably trickier than the final stage of the main story.

Drone Tactics is nearly a must-buy game for anyone who enjoys the tactics genre. The well-executed combination of deeply customizable units and predetermined class strengths is rarely handled so smoothly. Most tactical RPGs hand the player either a set of completely blank slates, or rigid, barely tweakable, class-defined characters. Being able to see the physical results of these customizations in beautiful 3D is an extra boon. The gameplay mechanics themselves are on the simple side, making this a reasonable entry level game for newcomers. Battle decisions always come down to “melee, gun, or cannon” on offense, and “counter, defend, or evade” on defense. Strangely, the pace of the game is so fast that it triggers the “just one more turn” reflex more kin to PC strategy games. Battles fly by quickly, after which one will immediately want to check the shop for new items, then one will certainly want to start the next battle and try out new insects and configurations, and so on, until hours have passed without notice. The experience is handicapped by the inability to scan necessary drone statistics while making major combat decisions, and microgames which should be left to WarioWare and its clones. Also, the computer-controlled bugs are suspiciously better at evading than even the player’s most agile bug-warriors. In all, this game is more than Advance Wars with insects; it stands on its own as one of the best tactical games currently available on the DS.