It seems like only yesterday when Drakengard released in North America. To be exact, it has been nearly two years since the game was released amid lukewarm reviews and overall mediocrity. Players will realize quickly that the game play — a mixture of large-scale battles, like out of Dynasty Warriors, and the on-dragon missions, like in Panzer Dragoon — is not for everyone. This past week, Ubisoft delivered on its first North American publishing of a Square Enix product, Drakengard 2. First things first, It should be noted that this may include spoilers from the first game, so first-timers beware.

The game takes place in the same general area as the original did, and actually, later on in the game, players will revisit a familiar area. It has been eighteen years since Caim saved the world from the cult of the Watchers and someone close to him sacrificed their life to become the final seal. The Knights of the Seal were formed to protect the seals, as well as watch over all of the people of the world. Corruption, murder, and deceit soon take over, and, before players know it, their entire world is turned upside down. Not knowing what is right anymore, Nowe, the main character, follows his heart and heads off to seek out the truth. This truth, however, could destroy the very world he looks to save.

You may or may not have noticed that this game is very dramatic, and in some cases, overdramatic. This is emphasized through a decent voice cast, enthralling music composition, high-quality CG cutscenes, and a story that will keep you coming back. More on all of that in a bit, as now you’ll take a look into the battle system that makes this game unique.

Ok, yes, this game takes quite a few different game styles and mixes them all into one formula. Original? Maybe not. This game does take each of these styles and uniquely mixes them, something most other developers haven’t really been successful with. One thing that players will notice in this game is that the game play really hasn’t changed from the original title. The same three-tier battle system of ground, mid-air, and high-air is still the core of the game. Some little changes have been made that will make players a little happier, though.

The first change, in the party-system, makes the game play both a little easier and a bit more strategic. Each character is strong against certain types of enemies, and players will find themselves changing between characters quite often. The lack of a time-limit on levels and party members is a welcome change, allowing for near indefinite possibilities in battle. The other of the biggest changes is that players have the ability to equip a certain amount of items, as well as an accessory to help out during battle. This allows a breather for when players are unable to get 60-hit combos that might have left them with a green health orb. Players must remember to equip weapons for all of the characters in their party as well as keep the item wheel stocked up with health and magic potions. 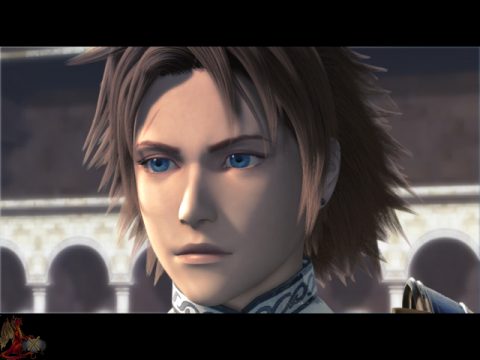 Story-wise, the game starts off with what one might expect a Knight of the Seal to take part in. First, the player is taken through a training module if they are playing Easy mode. Then players must prove their strength and battle the leader of the knights. Players are then thrust onto the battlefield where they must help protect the seal. Shortly after, the main character learns of deceit, murder, greed, and a power that he must try to attain to make the world a better place. At this point, the story picks up and thrusts players into the role of Nowe, world savior. By the end of the story, you will feel attached to the world, the characters, and possibly even some of your enemies. Unfortunately for them, there is only one choice, and that is to win at any cost.

Graphically, this game seems to be using the exact same engine from Drakengard. While this is a good thing when it comes to the exceptionally handled cutscenes in the game, it isn’t that good of a thing in the gameplay. Players will realize shortly into the game that textures, draw distance, and the overall look of the world are all poorly realized in real-time. The characters and enemies, like in the first game, are all animated fairly well and react as one would expect in the real world. Luckily, the game’s story more than makes up for the low quality visuals. 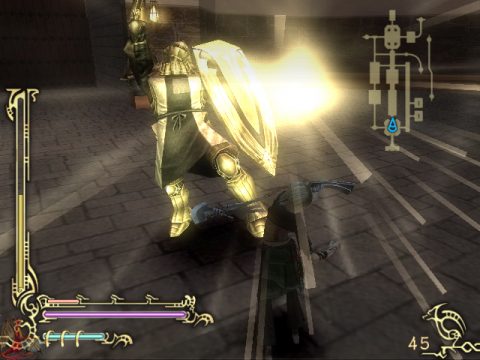 The best area of this game is the sound portion. As was mentioned in the preview, Aoi Yoshiki handled the composition in this title and he handled it quite well. The orchestra that was used in some of the tracks was very well done and emotionally plucked the right strings. Battle music wasn’t quite as repetitive as it was in the original and had a better flow this time around. The sound effects, for the most part, were implemented in a positive way for the gameplay. The clanging of weapons against armor, though, never really changed based on weapons and seemed rather out of place at times. The voice acting was near perfect in execution, with only some problems with over-acting on some occasions, which may have been due to the way it was written more than a knock on the actors themselves.

For those that may not be aware of it yet, Square Enix handled the localization of this title, while Ubisoft handled pretty much the rest of what is involved in publishing a title in North America. The voice acting, as some might pick up, seems to have been done in Britain once again. Hopefully this isn’t the start of abusing British actors. The localization was quite good, with few errors, if any. For the most part, nothing changed from the Japanese version. The only difference is that there is no Japanese voice acting in this game. The theme song for Drakengard 2 was voiced in Japanese originally and is in English in the American version of the title. Players will notice that there aren’t any scenes in the game that go unvoiced, which is different from Drakengard.

In the end, players will realize that this game has superior sound direction, unchanged graphics, a captivating story, semi-repetitive gameplay, and an addictiveness that just wasn’t as prevalent in the first title. For those reading that may not have enjoyed Drakengard, for the most part, the game feels the same. Once the story picks up a few hours in, you might find yourself pleased to continue or you may find it a bother to trudge on. This is very similar in feel to the first game in that some people will like this game, while other people will completely hate it.

With Drakengard 2 now released in both Japan and North America, Ubisoft and Square Enix only need to worry about one more release. The European version is currently on schedule for March 3. It should be emphasized that anyone under the age of eighteen should not be playing this title as it is rated “M” for Mature and contains quite a considerable amount of blood and gore.