Don’t Trode on Me

With Dragon Quest VIII: Journey of the Cursed King, every main Dragon Quest title is now available on a Nintendo handheld. The eighth game is a triumph in most ways, and having this portable version with numerous additions should be welcomed by anyone seeking a quality RPG experience. It refines numerous aspects of the series to make them more palatable without losing their essence, and remains entertaining throughout. This may not convert anyone steadfastly unimpressed by all other iterations of Dragon Quest, but is the pinnacle of the mainline series thus far.

A party consisting of the mute hero, his mate Yangus, the eponymous monarch named Trode, and Trode’s daughter Medea is on a quest for a nefarious individual named Dhoulmagus. Trode and Medea hail from the nation of Trodain, which was horribly blighted by Dhoulmagus’s seizure of an incredibly powerful scepter. To cure the curse that has made King Trode a monstrous-looking monarch and his daughter a horse, taking down Dhoulmagus is in order, but the villain has his own plans that involve killing a succession of individuals across the globe. Soon joined by Jessica and Angelo, two others with a personal reason for tracking down Dhoulmagus, the group’s journey is a long one that eventually takes in the entirety of the world.

The core narrative of DQVIII is uncomplicated and could easily have been produced in the 16-bit era, especially given the plentiful fetch quests that delay events. These fetch quests usually serve as a means of learning about additional areas in the game world though, and the presentation of all events is quite impressive. Seeing events take place through very effective visual models is more effective than terse text explanations would have been, and the cutscenes manage to be quite interesting. The core narrative is also supplemented by Dragon Quest‘s usual gallery of colorful locales and supporting players, all of them enlivened through the care of the presentation. Plenty of party chat opportunities give the protagonists a way to come more fully alive, and while the characterizations are not particularly deep they are ingratiating. Of particular note is a series of optional conversations that can be had with Medea, who is developed into a bit more than a standard bland princess.

Voice acting goes a long way in this game toward complementing the characterizations, and it brings them to life better than text alone did in earlier titles. The various accents and speech patterns localizers put into earlier DS and 3DS renditions of Dragon Quest were excellent at making regions stand out, but text alone made some of the encounters hard to comprehend. VIII does not necessarily have stellar voice acting in terms of pure quality, but its performances perfectly suit the characters and make them indelibly come alive. Thick accents that would have been muted through text bubbles alone are strengthened by the energetic performances. Along with the strong localization quality that Nintendo handheld Dragon Quest games have become known for, this aspect makes VIII highly entertaining to experience. 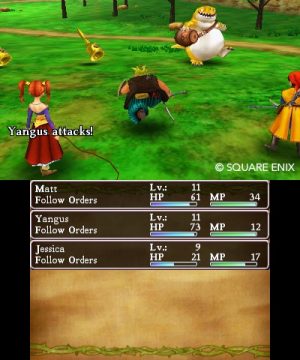 It’s totally justified in order to shut those noisy bells up!

Like the 3DS version of Dragon Quest VII, an encounter system on the PS2 original that was random has been replaced with visible adversaries wandering around. Unlike VII on the 3DS, encounters are a bit easier to deal with here thanks to the game having been designed around an over-the-shoulder viewpoint from the beginning. Enemies are rarely unavoidable and have limited fields of view, making it easy to sneak by when desired. VIII also has an interesting mechanic for spawning enemies, whereby simply spinning the camera around will cause fresh opponents to generate continuously, which is perfect for attempting to make a certain type of nemesis appear.

Aside from its encounter system, combat in VIII is very much like other entries in the series — turn-based action galore. The option to put fights at double speed on 3DS is extremely helpful for making events progress quickly though, and a good variety of opponents ensures that things won’t get stale. A new option to increase tension allows some strategy with boss fights, as using this ability several times will make an attack exponentially more powerful. Regular enemies are, however, rarely worth the time investment necessary to do it. That is not because they’re easy marks, as foes with powerful breath attacks and immunities to various elements pop up all the time. It’s simply that regular enemies rarely have enough HP to survive an all-out attack. In case of defeat, the standard Dragon Quest mechanic of losing half the current cash and winding up at the last church is in play, so the risk of annihilation is nonexistent.

A single tweak to the standard Dragon Quest inventory system makes this installment much less maintenance-intensive: having newly acquired items default to the bag for surplus storage instead of individual characters. This frees each character to only have on hand the items chosen by the player, instead of constantly needing to place excess manually elsewhere. An alchemy pot for combining items into new forms is quite interesting, partly because the system will only allow combinations that yield something instead of wasting the ingredients, and partly because it provides a method for gaining extremely useful materials not found elsewhere. Otherwise Dragon Quest VIII uses a system that will be immediately familiar to anyone who has played another game in the series, though this iteration is more efficient than that of older titles.

A number of big-budget titles in the PS2 era had shrunken or nonexistent world maps, but Dragon Quest VIII‘s is sizable. More important than its size is the ample amount of things to find by wandering around its edges. The original game featured numerous chests scattered around the world that just needed to be found, along with recruitable monsters for a rather entertaining arena side event. On 3DS a couple of additional reasons to explore the world in depth have been provided, in the form of a photographic quest for unique sights and blue treasure chests with random contents that regenerate each day. Numerous spots can only be accessed once sea and air travel have been unlocked, providing even more reason to scour the world at length and enjoy the interesting details to be found. 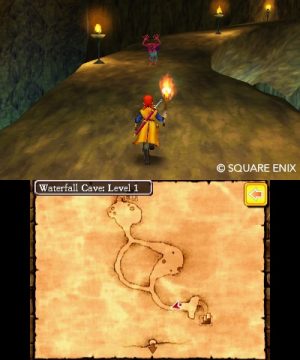 Don’t worry, this monster’s field of vision is pretty small. It should have glasses, but oh well.

Character progression in Dragon Quest VIII dispenses with the need to visit a specific location in order to change jobs, and simply grants characters some skill points to plug into five trees after each level gained that are distinct for separate protagonists. Four of the trees affect the abilities and affinities of each character for specific types of weapons, while the fifth is a unique line for each individual that is applicable no matter which type of armament is currently wielded. The two new playable characters on 3DS have been given unique aptitudes that are not copies of the earlier cast, making them viable choices for the sake of variety in combat. This system may be simpler than the multifaceted class structure of the two previous titles in the series, but more options for skills exist than can be accessed even at level ninety-nine, so some thought must be applied when upgrading.

While the draw distance for environments is smaller than that in the original version of Dragon Quest VIII, its visuals are still more than serviceable. Akira Toriyama’s character and monster designs are rendered very well by this graphics engine, and the small visual degradation from PlayStation 2 is in no way enough to make the title less than engrossing. Koichi Sugiyama’s score was performed by a full orchestra on the localized PS2 version, and this has also been downgraded for the 3DS. The synths used are nevertheless very effective, and the music quite worth experiencing.

Dragon Quest hasn’t been about top-notch production values in recent years, but having them for this game certainly doesn’t hurt. VIII has been a constant pleasure for me to experience in depth at last, and is now my favorite in the series. Anyone who didn’t experience it on PS2 and has even the tiniest iota of interest should check it out immediately, and the additional content serves as a good inducement to get veterans interested in a revisit. This won’t convert anyone who despises the stereotypical JRPG, but it shows just how well such a thing can be done.