While Square Enix’s tsunami of Final Fantasy ports and remakes over the last several years has elicited more groans than cheers from RPGamers, the Dragon Quest DS remakes of the Zenithia trilogy have been met with a more eager response. Next up is Dragon Quest V: Hand of the Heavenly Bride, the second in the trilogy, and a title which has never before been released in the Americas. It is Dragon Quest, so an expected sameness permeates every aspect of the game from the recycled music to the unsurprising battle system and visual style. For the most part, this works in the game’s favor. More interesting, though, is that the mechanics unique to Dragon Quest V, such as monsters in the party and the generational story, work well and make the game more than just another rote Dragon Quest experience.

To start with what makes Dragon Quest V different, the plot follows the Hero from childhood through his adult years. The important NPCs in the story are the Hero’s parents, his spouse, his in-laws, and his offspring. Rather than forming a party out of random NPCs who happen to tag along while everyone else in their village is too apathetic to help save the world, this tight group of logical companions is instantly relatable to the player. Caring about the Hero’s immediate family over the course of decades comes more naturally than caring about the typical male meathead and full-bosomed female who join the party two minutes after meeting the Hero in most RPGs. While the concept here sounds basic and obvious, it boosts the story by volumes and cannot be written off. At a higher level, the story itself is about a world overrun by monsters, a prophesized Legendary Hero, and a distant villain trying to free himself from shackles forged millennia ago, but the way it is told pushes it a notch above the clichés.

When there are not any family members around to help the Hero out, the party is fleshed out with captured monsters. Capturing monsters is simple. Sometimes after battle a monster will eagerly join the party. Done deal. This process is somewhat randomized, although certain monsters have a higher probability of joining than others. Once a monster has joined, it can either hang out in the wagon to gain experience points without getting clobbered, promptly assist in the next battle, or be shipped off to a cave where it will not gain levels and will probably never be touched again. Not all foes will offer their lifelong services, so the player is not constantly flooded with worthless assistants like in other monster collection games. Monsters start at low levels, and it makes for interesting decisions when choosing which to level up, which to give up on, and when exactly to bench a high level, beloved pet in favor of a new beastie buddy who shows more long-term potential. A dog is a man’s best friend, and over the course of a playthrough one may grow just as attached to an adorable slime in the party as he does to the family members.

Unlike Dragon Quest IV: Chapters of the Chosen, the gameplay is not formally broken into sections, but Dragon Quest V does have three distinct segments in terms of both plot and gameplay, each offering a slightly different experience. The first third sees the Hero as a young child. It serves as a sort of introduction to the game, allowing the player to grow accustomed to the battle system, controls, and world without really being interesting in any way. The party is small. The story is bland. It is more of a “This is Dragon Quest” piece for newcomers to see what is up and those familiar with the series to get giddy over being able to play a new entry. Gameplay picks up in the second part, though, when the plot hits an emotional climax, fast forwards a decade, and follows the Hero as a young adult. The ability to recruit monsters becomes available then, giving the player a full party to maintain, and the story is much better. The third segment tales place another decade later, provides a few powerful NPCs, and hits a high point when it comes to the player’s decisions on whom to bring to battle and whom to keep on the sideline. Intriguingly, this provides a reason to replay the game, trying new party members and maybe recruiting different monsters on the second playthrough. 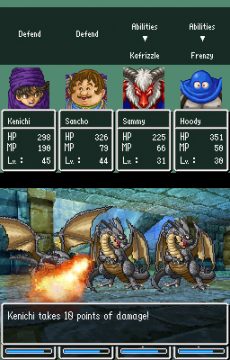 A Hero, a close friend, a goat-demon, and a henchman fighting together.

This brings the review to the point where everyone familiar with the series can just skip to the ending paragraph, having finished covering what sets Dragon Quest V apart from the other Dragon Quests. The battle system is a standard, turn-based, “Fight, Magic, Item, Run” affair. Up to eight characters participate in combat, with four of them active and four on the bench. Like Final Fantasy X, active characters can be swapped with inactive ones at any time, with no penalty, and as often as desired during battle. Commands are entered at the start of each turn, after which party members and enemies execute their actions in an order loosely based on speed. Tactics can be individually set for all party members aside from the Hero, ranging from “Focus on Healing” to “Show No Mercy.” Setting tactics rather than controlling everyone manually provides a benefit in addition to increasing the gamespeed and encouraging laziness: party members on auto will execute whatever action makes the most sense when their turns come up. For example, a magic caster might burn a foe for damage, but if a friend was critically injured or knocked out earlier in the turn, a healing or reviving spell would be used instead. Using tactics, then, allows the AI to choose the best possible action on the fly. This boon alone makes it worth using tactics over manual control in most instances.

While Square Enix seems to think that Amano’s sketches translate well into blocky DS 3D, Toriyama’s have been kept in 2D for the characters and monsters in the Dragon Quest remakes. The background is rendered in 3D with a static viewpoint similar to the Pokémon DS games; although the graphics here are technically 3D, they look almost 2D due to the nearly vertical, top-down angle of the camera. The camera can be rotated in towns, but doing so feels unnatural. Overall, the game looks good. Nothing is visually unpleasing in any way, however nothing will blow the player away either. It feels very safe, and sometimes safe is fine. The sound fares similarly. There is no voice acting, and while the musical score is good, the game suffers from mostly playing the same few songs over and over, and they sound like the same songs heard in all of the recent Dragon Quest titles. Piped through the puny DS speakers, it will make owners of an orchestrated Dragon Quest soundtrack CD want to mute the game and turn on the stereo. The localization itself is fine, although the script is far from wordy. As has become a norm in the series, people inexplicably have various real-world accents, varying from distracting to humorous. There are puns all over the place to add a bit of silliness, and an important decision around the midway point affects the script for the rest of the game. 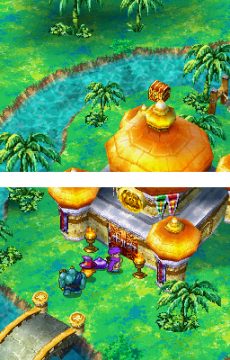 Leading a monster train into a golden palace?

This is Dragon Quest. Love it or hate it, you know exactly what you are getting. There are a few things done unusually well in this specific title, namely a story the player should actually care about, an even and consistent pace that was missing in Dragon Quest IV, less need to level grind, a party-forming mechanic that gives the player several diverse options to consider, and an overall experience that develops and changes over the course of the game, flowing naturally with the plot and maintaining a fresh feel for the battle system. When the Hero is a child, he is basically on his own. In young adulthood his companions are monster pals. In full adulthood, he is surrounded by the friends, family, and pets the game has spent over twenty hours endearing the player toward. It makes this one of the most complete, satisfying, and replayable Dragon Quests available. Dragon Quest IV and V are considered part of a trilogy because they take place in the same world, but no knowledge of IV is required to understand and enjoy V. Anyone who does not have an abject hatred of traditional JRPGs should give it a whirl. Now, if only Square Enix would upgrade the lousy interface.