I May Want Your Blood Mummies!

Long ago, the Almighty created the angelic Celestrians to watch over humanity. They were to protect the feeble creatures and guide them in times of trouble. The Celestrians didn’t always appreciate their task, but they performed their duty admirably… until one day when everything they knew was challenged by one of their own, a lone hero. Thus begins Dragon Quest IX: Sentinels of the Starry Skies for the DS. If the story sounds familiar so far, it’s because it is. Fortunately, Dragon Quest IX is a refinement of traditional Japanese RPG tropes rather than a mere repetition. Although the main plot and mechanics are familiar enough to be considered retro, the polish and density of things to do make the game well worth checking out.

The main game consists of RPG mainstays such as exploring caves, fighting turn-based battles, and completing tasks for orphans and ineffective members of the upper class. Along the way, the heroes confront visible overworld monsters and navigate a web of menus to organize their gear. This sturdy core is embellished with plenty of additional quests. First, there are the 184 standard quests (including DLC). Most of these are the standard “kill X monster with Y ability” or “bring X to a certain character” kind of deal, but the characters involved are entertaining. As a whole, they add depth to the world and establish that the main character’s task as a Celestrian doesn’t just extend to helping mortals who’re important to the plot.

In addition to quests, there’s a simple, but robust alchemy system for creating cheap and/or rare items. Item recipes are located on bookshelves throughout the game, or the player can guess at them through trial and error (or more likely, pick them up from a FAQ.) After acquiring a recipe, the player combines the necessary ingredients in a magical alchemy pot. Many, if not all, of these ingredients can be acquired through battle. However, a more effective way to harvest them is to find them on the world map.

While on the overworld, the DS’s top screen displays a sepia-tone map of the region that the player inhabits. However, it doesn’t display the hotspots for alchemy ingredients. This design decision allows casual heroes to quickly move from one town to the other, while the more die-hard explorers are rewarded for their forays into uncharted territory. Not only do these diehard challengers of the unknown acquire valuable materials, they also experience the unique and often imaginative landscape features that house them. For example, one of the only two natural sources of fresh water in the world is a hollow tree stump. Obtaining a ready supply of rockbomb shards requires braving the blasted remains of a decayed civilization. Building up large stocks of materials is time-consuming, but only really necessary if one’s goal is to master the post-game content.

Speaking of the post-game, it’s a beefy element of the Dragon Quest IX experience. Several locations on the world map can only be accessed after completing a post-game quest, and further quests tie up many of the main story’s loose ends. After the credits roll is also the best time to delve into the randomly generated treasure maps dungeons that appear occasionally throughout the main game. At their higher levels, these grotto dungeons contain monsters and equipment beyond the pale of the main story — as well as a few familiar faces for fans of the franchise. Some of this content is immediately accessible, although the greater rewards will probably require intense grinding sessions.

The localization is spirited, and it’s clear that a great deal of effort went into soaking the world in lighthearted fun. Every region has a distinct British dialect that sets it apart from other areas, compounding the game’s attention to travel and exploration. Major characters have recognizable, if occasionally clichéd, speech patterns. While this dependence on folksy sayings is occasionally overwrought or ridiculous, it is effective in establishing a tone for the game. 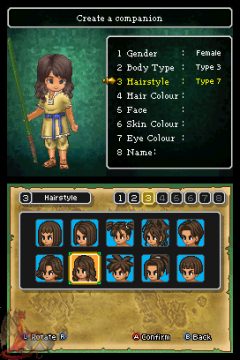 What characters from other games can you create?

The other major element of Dragon Quest IX‘s localization is the wordplay. Getting through a single block of text without encountering a pun, fanciful burst of alliteration, or malapropism is a feat worthy of an accolade. These range from the groan inducing (Moosifer) to the sublime (the surprise at the top of the Heights of Loneliness). Dragon Quest purists or anyone expecting a primarily serious romp may not appreciate this added wackiness, claiming that the copious puns break from earlier iterations of the game or that they obscure continuity between Dragon Quest games.

Curiously, the cheerful colors, endless puns, and delightfully cheerful dialogue often stand at odds with the main storyline. Death and regret worm through the most whimsical of trappings, creating a world that is occasionally multi-layered, like the more subtle moments in Earthbound. This positive blend isn’t constant, however, and often just comes off as fractured. While silly names are fine for grinning slimes or quirky side villages, they often mar the ethos of what would be an otherwise imposing boss figure.

One upshot of this complex world is the strong characterization of the side characters. Since the protagonist is of the proud stock of the silent gesticulator, and all other party members are created by the player, it’s up to the non-player characters to carry the story’s dramatic weight. This is shown on a local level through small, optional quests as well as the episodic main quests. While only a handful of the side characters are a continuing presence in the story, their self-contained tales add together to create a collection of vignettes. Many of their stories are familiar, but they’re carefully executed and not entirely devoid of twists.

Although the heroes of the game aren’t given much in the way of textual characterization, their capacity for mechanical and aesthetic customization is worthy of commendation. Early on in the game, the battle party size increases to four characters. Each of these characters can select from the six available starting jobs. Further questing unlocks an additional six jobs. Leveling results in skill points that can be spent on advancing the current job’s four weapon skills or its class-exclusive skill. After a certain amount of points are put into a skill, it provides a new ability or a statistic bonus. The key to customization is that changing jobs is a simple task, and skills carry over between jobs. Weapon skills need to be maxed out before becoming transferable, and spells don’t transfer, but almost everything else stays whether Karl is a minstrel or a warrior. The overall effect is one where class roles have their protected roles, but they can be tinkered with or expanded upon to match individual play-styles. Doing so requires time and experience points, but both are presupposed when playing a Dragon Quest game.

The second element of customization worth mentioning is how the party looks. Creating a character doesn’t just involve selecting his or her class, but also hair, eyes, face shape, body type, and skin color. The options are limited compared to other avatar-creation systems, but still varied enough to create a wide variety of traditional and non-traditional groups of heroes. This customization continues in the armor system. 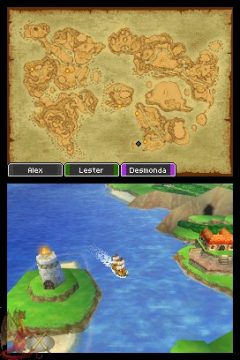 It’s a big world out there. Is your boat enough?

Unlike many traditional RPGs, characters’ equipment influences how they look. Players will have to make difficult choices when girding their loins for battle: is it worth a few extra points in Defense to look like a reject from Slimeworld? Is sticking a gaudy, defenseless vest on the stern-faced priest worth the handful of undocumented benefits provided by stylish clothing? Is wearing a helmet worth hiding the character’s distinctive hair? Although fashion choices initially seem trivial, they work in conjunction with the job system and each character’s personalized look to create a tailor-made gaming experience.

One potential downside of all of this customization is game balance. Certain party builds will have no problem with the main storyline, stomping everything that dares approach their well-polished boots. Most battles are predictable enough that less-optimized parties won’t languish, but they will need to work harder for their victories. Some skills have such specialized uses that they seem like wastes of skill points when compared to others with broader applications.

As typified by its dress-up system, the graphics in Dragon Quest IX are quite strong. They’re cheerful and colorful, proving that Dragon Quest‘s distinct look has made a favorable transition to the DS. The cut scenes are rare, but good-looking enough to feel like a reward or an accomplishment. The in-battle effects aren’t as flashy, but they do everything that they need to without impeding play.

The audio doesn’t fare as well as the visuals, unfortunately. The individual tracks aren’t bad, but there’s nothing gripping about them either. This initial charm is eroded by the continual repetition. Moreover, the limited audio tracks predict plot twists before they occur. Dragon Quest purists may appreciate the new renditions of old favorites, but even those are pretty forgettable as soon as the DS closes.

I can’t comment on the much-touted Tag Mode system, as conventions and launch events are the American gamer’s best chance to take advantage of the DS’s wireless transfer feature. However, the WFC for downloadable updates does its part in making the game seem more alive. The downloadable content is exactly what downloadable content should be: non-essential to the core story, but enough to extend interest in the game beyond its original window. In addition to the bonus quests and the special rates on in-game items available in the store, the WFC introduces cameo characters from prior Dragon Quests. In addition to being a welcome nod to series continuity, the visitors provide unique armor for further games of dress-up.

Although Dragon Quest IX‘s main story can be completed in forty hours or so, doing so would be a disservice to the supplementary material. These additional layers are what transform the most recent iteration of one of RPG-dom’s sacred cows from a repainted throwback into an old-timer who has traded speed for the silvered brows of style. Moreover, these sidetracks and post-game material allow players to tailor the game’s difficulty. Will it be a light, breezy quest to simply save the world, or a white-knuckled trial to eradicate even the most challenging of evils?