Slimes Can Be Heroes, Too

Slimenia, specifically the city of Boingburg, is under attack by a group of warriors known as the Plob. Their true motives are unknown, but they are definitely hostile. Spinoffs usually involve one or more main characters from the game, show, or book that they come from. This is not the case in Dragon Quest Heroes: Rocket Slime. Rather, players take control of what is generally known as the weakest enemy in the entire series: the blue slime. Luckily, this particular slime is well above the ordinary. He is able to use his elasticity to perform powerful fighting techniques and even gain control of a giant tank for use in battles he is unable to fight on his own. Along his journey to rescue his friends, he can also gather a wide variety of items and resources and ship them to Boingburg so that they may be loaded in his tank. After all, he is a slime on a mission.

The heroic slime will naturally run into many enemies in his travels. These enemies can generally be dispatched by slamming into them or throwing items around in order to inflict damage. As with the many items and resources sitting around, enemies can be shipped off to Boingburg. Capturing enemies has its benefits, but defeating them yields money and the occasional item.

Unfortunately, fighting enemies in this manner is not without its difficulties. This isn’t to say that enemies are particularly difficult, as the majority of the game is quite easy, but rather that the interface can make battles more cumbersome than they should be. Because enemies are fought by slamming into them — the same process the hero uses to pick up items — enemies have a chance of also being picked up in this manner. There’s also a chance to get enemies stuck to the hero’s head when using one of the game’s few tools, such as the Slime Knight. This may not seem especially aggravating, but it can happen very often if the player isn’t careful, particularly in cluttered tank battles. Players must also cycle through their inventory in order to throw enemies back onto the field if they’re carrying other items that they wish to hold onto. Another problem is that there is little control over which items are picked up. Often, players may end up lifting an item or enemy they don’t want when attempting to pick up another item. This lack of precision is silly when allies and enemies can easily lift the items they want without slamming into things. 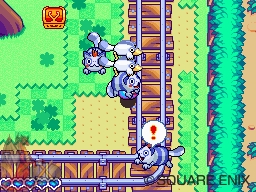 “Maybe they won’t see me if I disguise myself as a floating pile of enemies?”

Luckily, the interface isn’t entirely unpolished. The menu makes good use of the dual screens and even allows players to leave it open to a specific page for easy reference. The dual screens are also used effectively to allow the player to keep a close eye on everything that’s going on in the game’s chaotic tank battles.

Tank battles are where everything comes together. All of the resources that are gathered, enemies that are captured, items that are won or crafted, upgrades that are purchased, and allies that are made — it all goes into these. Each tank, like the heroes, has HP. When this HP is reduced to zero, the heart of the tank opens up and becomes vulnerable to attack. When destroyed, that tank loses the battle. The tanks’ crew has the job of collecting materials that come out of various chutes and loading the cannons with them in order to damage the enemy. It may sound pretty simple, but there is often a rather intense amount of action and often quite a bit of chaos due to unpredictable things happening at a rather high rate. At first, it may not seem like it, but there is also a fair amount of strategy that goes into these battles. Crew members have their own fighting style and AI settings, and there are numerous types of special ammo that have effects such as healing, reflecting enemy fire, and cloaking. Even normal ammo has to be carefully selected based on speed, power, and whether it may cause problems when not handled carefully. Though the aforementioned interface issues may slightly limit the effectiveness of certain strategies, there is still a myriad of options for the heroic slime to perform, such as sneaking into the enemy base, stealing ammo, sabotaging enemy machines, or even beating up enemies before they can load their cannons, provided the player is skillful enough to take on the entire enemy team with little or no support. The sheer number of options open to the player and intensity of battle make tank battles highly enjoyable. There are usually only a few of them per stage, though.

In addition to their innate fun factor, tank battles are also one of the things that make Rocket Slime original. Combined with the unusual resource collection and gameplay, there is little like this game out on the market right now. The first game in the subseries wasn’t released here, so those who didn’t import it will have an especially unique adventure, should they pick this title up. 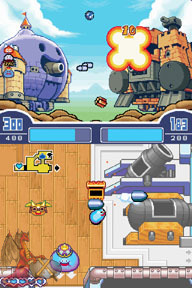 While the game may be original, it isn’t very long, especially when compared to the most recent installment in the series, Dragon Quest VIII. It’s possible to finish the main quest in about twelve hours without breaking too much of a sweat. There is some optional content, but it is unlikely to bring the total playtime above twenty hours unless players meticulously collect a large supply of powerful items or rare enemies.

As with most short games, Rocket Slime is somewhat lacking in story. It never pretends to be more than a lighthearted game, so players searching for an epic should look elsewhere. On the plus side, there are quite a few characters that have more personality than the standard NPC, and there are numerous references to the rest of the Dragon Quest series, specifically Dragon Quest VIII.

Rocket Slime is rather impressive visually. The game’s army of tanks all have nice designs and even their own unique logos that match their general theme. There are numerous sprites to be found, and they are mostly large and well-animated. Everything fits together very well with the environments to create an atmosphere where nothing feels out of place.

The visuals may be good, but the music is nowhere near as aesthetically pleasing. The largest problem sound-wise is that the majority of the game’s areas all use the same background music. The track itself isn’t bad, but it’s played so often that players will likely be tired of it by the second level it’s played in. To make things worse, the music in one of the other levels is very short and repetitive. This isn’t to say that all of the music is bad, as there are a few good tracks too, just that the ones that are played the most are either overused or poor. The sound effects are mostly from other Dragon Quest titles, but they’re nostalgic rather than overused in this case.

There really is a lot going for Dragon Quest Heroes: Rocket Slime. The gameplay is fun, the visuals are nice, and the game’s original. The interface issues hold it back a lot, though, and the repetitive music certainly doesn’t help. Rocket Slime is still likely to entertain those looking for something original, or pretty much anyone for that matter, but the game is by no means epic or without flaw.