Just about every console has one title that stands far below every other in a particular genre. When dealing with RPGs for the Game Boy Advance, Dragon Ball Z: The Legacy of Goku wins this undesirable crown. With the possible exception of some of its graphics and cutscenes, this game was inferior in almost every respect. It was with this horrible performance in mind that Atari tweaked the game’s sequel so it would improve on the flaws of the original. The result is that Dragon Ball Z: The Legacy of Goku II is superior in every department.

DBZ aficionados will appreciate the story’s detail, as it chronicles the events of the Cell saga. This being said, anyone who is familiar with the TV series will know exactly what’s going to happen in the game. Many of the familiar faces from the series make appearances, including old man Roshi and Bulma. In order to defeat Cell, Goku is joined by his son Gohan and three companions: Piccolo, Trunks, and Vegeta.

Probably the most notable upgrade to Legacy of Goku II is the ability to play as one of the five aforementioned characters. Specific characters are needed to break some doors, which act as an important reminder to keep balance in everyone’s levels. This balance is needed, especially for the final boss fight. Thanks to the adventure-style battle system, each character will have to use their array of abilities, some of which include Piccolo’s scatter shot and Goku and Gohan’s trademark Kamehameha beam. Players of the original Legacy of Goku will like to know that Goku no longer yells “KAMEHAMEHA!” every time he releases that attack.

Movement in the individual areas also differs from the original title, as the characters no longer have the ability to fly in battle. This is for the best, as more effort was spent in developing the combat abilities of each character. While Goku only unleashed his Super Saiyan form during the final battle with Frieza in the first game, all playable characters may morph into their super-charged form, whether it be Super Saiyan or Super Namek. 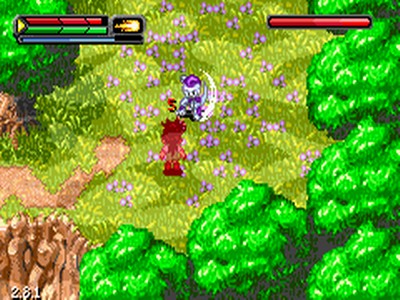 Go away…you had your fun in episode 75.

To reflect these changes, the status menu has become slightly more complex. All characters stats are based on three values: Strength, Power, and Endurance. Many of the game’s best items are capsules that permanently increase a character’s respective statistic when used. Item management is easier to navigate this time around, and there is the addition of a journal, in which quests are catalogued. Again, it’s a substantial improvement over the original title, although many of the quests throughout the game serve as simple reminders for the plot’s progression.

Early in the game, Gohan and his crew will receive and item called the Scouter, which becomes indispensable to the party. The Scouter is used for two purposes: scanning enemies and friends, and mapping various areas. While collecting the data of all the monsters is an interesting task to undertake, it’s also time-consuming. The map, on the other hand, is far more useful, and it helps the party navigate through many of the areas on Earth.

Many of the locales in Gohan’s version of Earth look much fancier this time around, as the graphics in both gameplay and the opening cutscenes have been tweaked slightly. It’s not groundbreaking work, but it’s also a reminder of what the GBA is capable of. Anyone who remembers the Mode 7 capabilities of the original Super Nintendo will appreciate its use in the game’s world map. It’s a nice touch that gives the game a little more legitimacy among other console titles. 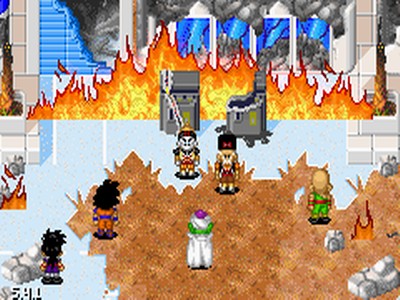 Hey! I said no civilian casualties!

Sadly, the game’s music is average at best. There isn’t a single track that stands out, although the game features enough of a variety to prevent RPGamers from going insane. Even so, the sound-effects are also average, but like just about every other part of Legacy of Goku II, they are a substantial improvement over the original.

Despite the game’s relatively short amount of playtime, there are several side-quests available, including a secret playable character and several side missions that grant impressive items. With this and the game’s larger array of characters, monsters, and abilities, Legacy of Goku II is slightly more challenging than its predecessor, but not by much. All characters levels max out at 50, and this can be easily done within 15-20 hours of gameplay.

If there’s anything to be remembered about this game, it’s that the myriad of improvements made to every segment of Legacy of Goku II make it an impressive accomplishment. Granted, it doesn’t take much to improve on a title that is considered by many to be the worst of its kind, but credit should go to Atari for improving on every aspect of the game possible…and doing it right.