Turn Into Chocolate, Melts in the Hand

The mystery of why Webfoot Technologies decided not to call this game Dragon Ball Z: The Legacy of Goku III is quite perplexing, since more time is spent actually playing as the character than in the second game. Dragon Ball Z: Buu’s Fury is not spectacular by any stretch of the imagination, but it manages to deliver a moderately entertaining rush without as many aggravations as its predecessors. This is not a mythical title that will entice those with no interest in the source material to play it, but it delivers an experience that does not spawn only disappointment and anger.

Buu’s Fury picks up immediately after Cell’s destruction and depicts the filler storyline of Goku fighting in an afterlife tournament. It then shifts focus to his son Gohan attending a public school for the first time, and eventually leads to the appearance of a villain prominently displayed on the cover. Veterans will find little they haven’t seen before, while newcomers to this material will understand what is going on but are likely to find it not terribly compelling. Significant chunks of exposition and character development are missing from this version of the storyline, providing reason for both camps to be dissatisfied.

In the place of meaningful moments from the series, Webfoot has again placed plenty of filler sections. A few of them draw from material that was already filler within the show and its spinoff movies, but others continue to cripple the pace of what narrative has been placed into the game. The single largest example comes when everything is put on hold for a hunt to find the Dragon Balls despite Buu being on the loose killing hordes of people, but it is not alone in this regard. Putting undeniably urgent events on hold numerous times does not help the story stay involving.

The game itself plays similarly to Legacy of Goku II, showing the Saiyan characters of the series pummeling their adversaries in an overhead view with fists and energy blasts. Characters are now capable of blocking enemy attacks to drastically reduce the damage dealt, though dodging is usually a more effective tactic. The other major difference between this one and its predecessor is that enemies no longer magically appear behind the player after being backed into a wall, allowing the cheap but effective tactic of pounding them until victory. 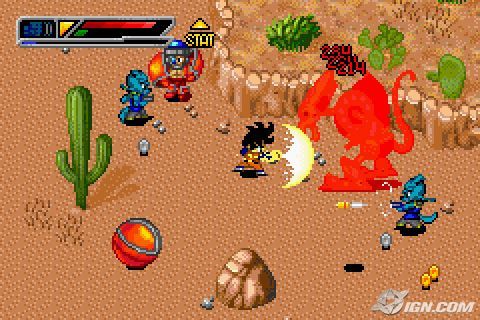 Why, yes, that IS a palette swap of the robot Goku fought when he was a kid. Who knew they were so popular?

In sharp contrast to Webfoot’s earlier Dragon Ball Z endeavors, enemies cough up money and occasional equipment when they die. The money is entirely unnecessary given how liberally adversaries cough up healing items, but the ability to buy more is a handy feature. Unlike the severely limited inventories of the earlier games, this one allows all the plentiful healing items dropped to be stored until needed. Enemies die faster in this game and are subject to the same rock-stupid AI as before, reducing the probability of being killed to a great degree. Even if the enemies do hit a hot streak, a few items can be found to automatically revive characters. Bosses tend to have lots of HP, but no special care is needed to survive them. Such a lack of challenge might be aggravating in other titles, but here the combat has almost no nuances and keeping it quick is the best idea. This is particularly helpful given that the game still restricts saving to specific points, which is not the ideal mechanic for a portable title.

Unlike the previous game, Buu’s Fury does not automatically distribute character statistics when levels are gained. Instead the player gains three points to place onto whatever statistic seems most useful, and hoarding these bonuses to use en masse is recommended given how quickly levels are often gained. Having equipment is another new feature to the series, and while it doesn’t do anything more than one would expect, being able to augment characters through this means is still welcome. It is particularly helpful to have certain pieces that increase the experience yield when grinding is required.

Buu’s Fury unfortunately retains the mechanic of its predecessor that prohibits access to certain areas until a character has reached a given level. As most of these areas are mandatory for progressing with the game, this forces players to grind for a time until the required level has been reached. While doing so is not as tedious as it could be thanks to rapid level gains, being forced to do so at all in a game that can easily be completed in under nine hours is galling. 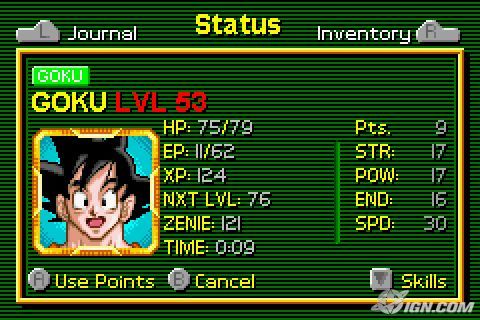 That is the weakest level 53 setup I’ve ever seen.

Visually Buu’s Fury is on par with Legacy of Goku II, although it may feature even more barren wastelands than that game did. The scenes from the story that are recreated using the game’s visuals do a serviceable job, but frequently the same sprite is used for NPCs who had multiple looks in the source material. At least everything is bright and easy to see on the GBA’s screen.

Bruce Faulconer’s contributions to the FUNimation version of the show may not be acknowledged by name, but make up almost the entire musical backdrop. The GBA’s speaker isn’t able to make the best show of his work, but the basics manage to be catchy even so. The sound effects are functional without being particularly memorable, making the audio package very similar to Legacy of Goku II.

The major change to Buu’s Fury is the decrease in difficulty, but this proves to be exactly what the series needed to become moderately entertaining. By dropping the risk of enemies suddenly overpowering the player through a freak accident, playing through without constantly running back to a save point was made possible. This game is hardly the paragon of RPG excellence that could theoretically be made from the Dragon Ball property — that title does not yet exist. Buu’s Fury is a supremely adequate action RPG on the GBA though, and that classification is all the more remarkable considering what preceded it.