The Sort of Party You Want to Miss

Innovation tends to be a very celebrated aspect of game development. Games like Wii Sports, Puzzle Quest, and Mass Effect are praised respectively for a new control scheme, mixing genres, and unprecedented dialogue tree depth. However, Dokapon Kingdom proves that even successful innovation can make for an unsuccessful game. It’s fairly safe to say that a Party RPG has never been made before, and unfortunately, although the execution of the concept is well done, this truly innovative design just isn’t fun to play.

All of the modes in Dokapon Kingdom take place on a board game-like arena, similar to a typical Mario Party title, and the comparison can accurately continue to descibe how players and computer players take turns to move a randomized number of spaces around the board and make decisions or trigger events based on where they land. There are also places to receive or buy items. But Dokapon Kingdom isn’t Mario Party after all, so the comparisons essentially end there. There are no mini games in the expected sense, and this party game mixes in RPG elements throughout the entire experience. There are levels, there are experience points, there is equipment, there are status effects, there is money, and there is even a story should one choose the appropriate mode. 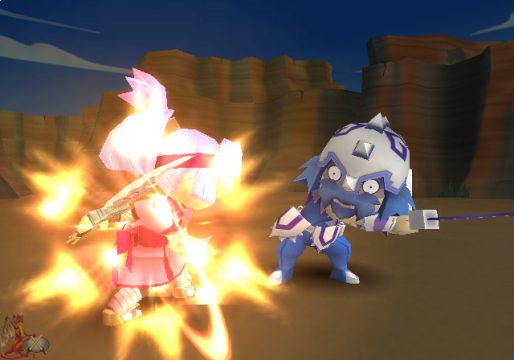 Surprisingly, these elements are integrated well and they don’t particularly seem out of place in the game. While it is bizarre to enter a battle on a blank circle instead of getting three coins or starting a mini-game, the process becomes familiar and begins to make sense within the world’s structure. And there is a lot to the world in Dokapon Kingdom. If players chose story mode, or a longer multi-player session, they will soon discover that there is an unexpected level of customization and depth to what the game provides.

If all of this sounds quite positive, it is unfortunately misleading. Because, in fact, for how well everything is conceived, the final product results in a frustrating package that dilutes a typical RPG experience and confuses a typical party game experience. For better or for worse, the party genre usually has a large random factor, and Dokapon Kingdom is no exception. So a player could spend a long time building up their empire and character by buying towns and fighting monsters only to have an opponent stumble upon a good bit of luck and send an extremely powerful robot your way to put a massive hindrance in your progress. This party game element completely invalidates the innately rewarding RPG elements and is comparable to being hit with a blue shell in Mario Kart Wii. To compound this, a board game setting is hardly a compelling backdrop for a RPG and thus story mode is hardly worth playing with one or more players. In fact, even if a player were to think it was a fine setting for a story, it’s so one-dimensional and the characters are all so annoying, she should avoid it anyway. 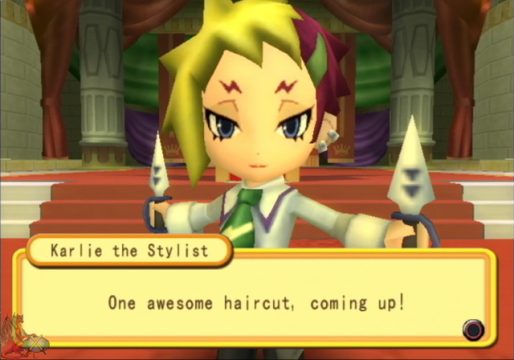 So then what about the strictly multiplayer mode? Why not just ignore the story and have some friends jump in for a quick round? Well that’s possible, but then it becomes abundantly clear that the RPG mechanics just disrupt the game and serve practically no purpose since there isn’t a main goal to work towards. And even if a player can ignore all that, she’ll hardly be able to convince her friends to play with her. Mario Party became successful because all the characters are recognizable and the gameplay is incredibly simple. So although the end result isn’t that deep, it’s a decent title to have in your library if a few friends come over. With Dokapon Kingdom, however, the host will have to explain so much to her likely confused friends, that they’ll be asking to play Wii Sports within minutes. Simply put, it’s a game with a friendly, cutesy, party game exterior with more complicated, hardcore, RPG gameplay that is absolutely not cut out for a casual gamer.

All that said, it is possible for a group of friends to all be deeply familiar with RPGs, and that group will likely have the patience to figure out how Dokapon Kingdom works. So if that same group can all get past the annoying presentation, characters, and frustrating party elements, then it would likely enjoy the surprisingly deep back-end the game offers. But without even an online option to unite geeks around the world, Dokapon Kingdom succeeds in innovation and, unfortunately, not much else.