An Hour Was Enough

If there’s one thing video games have taught us about demons over the past twenty years, it’s that they are unquestionably cold, calculating, malicious entities deserving of all the anger and hatred the world has to muster. Thankfully, Nippon Ichi Software took the time to show us the other side of the demon world. True, they’re still cold, calculating, malicious bastards, but they can love too! Enter Disgaea, a tactical RPG based around the idea that demons, like humans and even angels, are capable of all that touchy-feely, lovey-dovey goodness that they loathe so very much. Disgaea: Afternoon of Darkness is a PSP port of the popular first game in this unusual franchise, with many new features thrown in for good measure.

Disgaea‘s unique storyline plays out very much like a Japanese anime series (and is one now, in fact). The tale follows the adventure of Laharl, the egomaniacal son of the Netherworld’s former overlord, who is woken up after a two-year nap by his vassal Etna with the news of his father’s tragic passing. As the two of them set out to restore order to the fractured political structure of the Netherworld (if fractured political structure is another way of saying power-hungry demons seeking to usurp the throne), they encounter an exuberant, angel trainee/ninja-wannabe/assassin named Flonne who has come to kill the overlord, only to discover he’s already dead. From there the trio proceed to defeat a Mid-Boss (several times), repel an invasion, and have a picnic, among many other oddities that could only be found in Disgaea‘s delightfully twisted universe.

To say the least, Disgaea‘s story is filled with humor from start to finish, and more than anything this is the game’s primary drawing power. Despite being riddled with clichéd anime silliness (including warped “next episode” previews between chapters), the story is surprisingly well-crafted and the characters are memorable and interesting, enhanced by the impeccable voice acting. To make things even better, Afternoon of Darkness features an alternate storyline starring Etna that can be activated by inputting a six-button code before beginning a new game, which begins with her accidentally killing Laharl rather than waking him up, despite the fact that several dozen significantly more powerful weapons were completely incapable of performing such a feat only moments before. 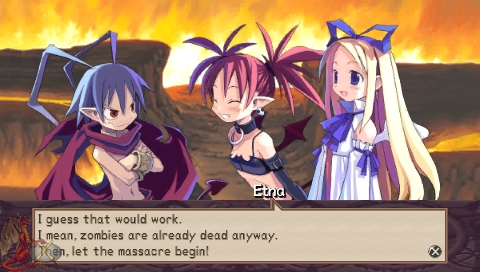 No game is complete without a zombie massacre.

Unfortunately, while Disgaea provides an excellent story, there are several issues with the gameplay that hinder it significantly. Characters only gain experience when they land a killing blow on an enemy, which makes leveling up something of a chore, particularly for healing classes. On top of that, whenever a new class is unlocked, the player must start a new character from level one in order to make use of it and will again need to restart from level one to make use of the more advanced forms of that class. Finally, the game’s pacing is simply ridiculous, with enemies rising by as much as ten levels between maps towards the end of the game, forcing the player to endure long bouts of level grinding. Not even Tony Hawk games have this much grinding.

Menus are also poorly designed, and can often be confusing to navigate. In particular, shopping can be extremely frustrating. While the game does show whether a piece of equipment is an upgrade or a downgrade through the use of colored text, it fails to show the original value of those stats, or the stats on the currently equipped piece of equipment. While this would normally be just a frustration, Disgaea‘s shops randomly regenerate their stock every time you enter the store’s menu, which means that if you exit to check the stats of a character, the item you were looking at won’t be there when you go back.

It’s truly a shame that these extremely basic parts of an RPG were done so poorly, because everything else about Disgaea‘s battle system is impeccable. Battles play out in a traditional tactical format, with the player moving his characters around a grid-based field and launching attacks on opponents. Humanoid characters also have the option of lifting and throwing allies, enemies, and objects around the field, a technique that sees regular use throughout the game. Another major feature is the geo panels and geo symbols, which add bonuses and penalties to characters standing on certain parts of the field. While the battle system seems simple at first, it is deceptively complex, much like a game of checkers where both players are wantonly cheating. Several actions that may seem like bugs at first are actually intended tactics that the player is encouraged to abuse, such as the ability to move characters into a position to be group-healed or to activate a group attack, and then move them back to where they started after the action has been performed. 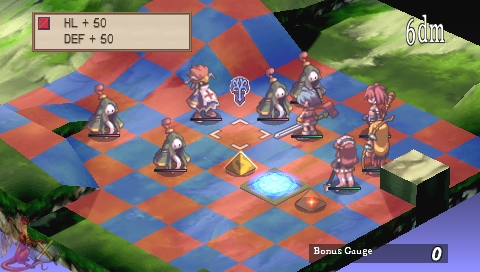 Disgaea is divided into fourteen episodes, with each episode containing at least four maps. The level design is truly remarkable, and makes excellent use of the various systems the game has put into place, particularly geo symbols and throwing mechanics. Also present is the Item World whose maps are randomly generated. These areas are present inside every item in the game, and the player can proceed through the one hundred floors of the Item World to improve the item’s powers. These items lack the clever level design of the main game and can be frustratingly tedious to work through, but are also the only way to reach the game’s absolutely insane level cap of 9999.

Sadly, despite the good parts, the aforementioned issues with pacing and leveling all but ruin any enjoyment that can be gleaned from them. It can be exceedingly frustrating to be forced to grind for several hours in order to get through the next portion of the story, and with so many interesting classes available, it is infuriating to be forced to grind up from level one just to make use of them.

Surprisingly, though Afternoon of Darkness has not received any graphical upgrade aside from a widescreen expansion, the game manages to look better on the PSP than it did in its original incarnation. This is mainly thanks to the smaller PSP screen, which prevents the sprites from looking choppy and pixelated. Regardless, the art style is excellent, and the game does a great job of providing a wide variety of attractive locations to visit. Battle animations in particular are very impressive, though some are rather lengthy. Thankfully they can be turned on and off at will, which is rather important considering the amount of level grinding required.

Sound is another aspect the game does well, particularly the music, which is exceedingly catchy. The voice acting is over-the-top, but appropriate and well-done, enhancing the game’s humor which is unquestionably its high point.

In addition to the extra Etna-based storyline, Disgaea fans can look forward to pitting their parties against their friends thanks to Afternoon of Darkness‘s ad-hoc multiplayer mode, though sadly, no internet play is available. However, fans of the series are likely to be the only ones interested in this latest incarnation, as the aforementioned problems with the most rudimentary RPG elements will unquestionably turn off many players. While the story and basic gameplay are very well-crafted, the flaws are too large to ignore or work around, and with an anime series based on the game now available, the story can be acquired elsewhere. On a positive note, the game offers an incredible amount of content, easily providing a hundred or more hours for those willing to plunge headlong into the deepest parts of the game. The main story can probably be completed in forty to sixty hours for new players, and faster for veterans. Disgaea: Afternoon of Darkness is a great RPG built upon a terrible foundation, and while it will surely provide endless hours of entertainment for series fans, players not fond of the original won’t find anything here to change their minds.