The Destiny of Destiny

Destiny is the first game from post-Microsoft Bungie, makers of the popular Halo franchise, and the developer has a lot riding on its success. As one might expect, expectations are sky high and unfortunately Destiny can’t quite match up to them. It just has some issues, such as some boring early missions, a lame story, and some tedious late game grinding. Those who can deal with these issues may in fact find the best mix of first person shooter and RPG mechanics available.

Destiny‘s story begins with a brief video of humans first landing on Mars and the discovery of the Traveler, an otherworldly entity in the form of a giant white orb. The Traveler gifts humanity with all sorts of miracles, and a golden age begins. Naturally, this is short lived as the Traveler’s enemy, the Darkness, eventually arrives in the form of multiple alien invaders that place humanity on the brink of extinction. This is where humanity makes its entrance as guardians of the last city, and these unnamed heroes are tasked with pushing back against the Darkness. If all this sounds relatively generic and corny, it is to some extent. Alien races all have a good look and feel to them, but certainly feel reminiscent of Bungie’s previous work and other popular science fiction.

The universe the game creates is certainly interesting, but sadly the best parts are all relegated to lore entries and don’t directly show up in the story. The narrative present is contained in main story and side missions, but it’s vague and mostly left to pre-mission briefings and small snippets of dialogue from the player’s ghost, a small flying robotic AI. The dialogue is fine, but fails to give the player any sense of what exactly is going on in the universe. There are hints of deeper plot elements that never get explored, which becomes very frustrating for anyone that finds Destiny‘s take on science fiction interesting. The game’s focus on co-op is likely the cause of the bare bones story, to keep things moving, and it’s a real shame. 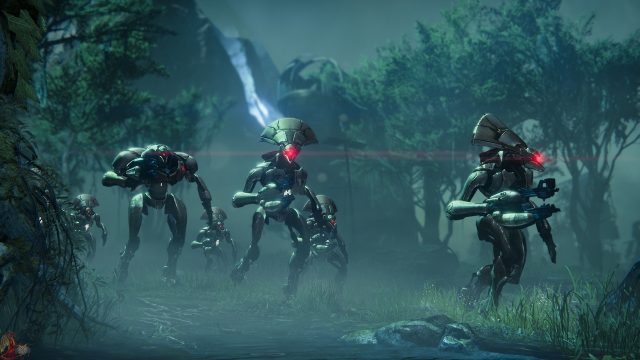 The Vex haunt the ruins of Venus.

Thankfully the actual moment to moment gameplay is a blast. Primarily a shooter with RPG elements, Destiny sticks mostly to three person co-op missions, along with six person co-op for the one raid currently in the game. With three classes to choose from, the core game has been nicely balanced around this precise co-op size, though there is nothing restricting players from forming a trio of any mix of the classes. The classes consist of the hunter, titan, and warlock. Each includes two sub-classes, which have skill trees consisting of different grenade types, variables to each subclasses’ special ability, as well as alterations to jumping ability, armor, speed, and recovery. Though skills are unlocked as the player progresses, the newer abilities aren’t necessarily more powerful. Instead, new skills give players more options on how to best tweak their character based on how they want to play. Since each subclass has a large tree, and players can switch between the two on the fly, there’s a ton of different ways for players to play.

There are a variety of different activities that players can take on to advance the game. The easiest way to start is the ‘story missions,’ the word story loosely used here since there’s not much of one, even during the mission briefings. Missions usually involve dropping into one of the game’s worlds and moving to a specific area to complete an objective. This translates generally to fighting groups of enemies or a boss. While the missions don’t offer much in the way of varying objectives, combat is fun and the different enemy races often require different strategies to deal with. The locations in the game are also gorgeous, and are often a joy to wander around. Players are free to roam around the areas while on a mission, and occasionally world events pop up. These allow players in the same area to work together to fight enemies or complete other objectives to earn rewards. This is the only time the game will feel like an MMO, as outside of this there’s little to no interaction with other players in the area outside of any co-op partners.

Outside of story missions, there are also strikes, the game’s single raid, and patrol missions. Strikes could be described as mini-raids, with three players taking on a short mission capped off with a challenging boss fight. Destiny reuses these strikes in more challenging “heroic” and “nightfall” versions as well. These include tougher enemies and restrictions on respawning. These provide some of the game’s best moments, requiring good teamwork and strategy to complete. The one raid, “The Vault of Glass,” ups the team count to a maximum of six and includes a variety of puzzle solving and platforming elements in addition to combat, providing an incredible and challenging experience. It has the best of what Destiny has to offer, yet lacks the matchmaking of other modes which pair players up, so those that don’t know others playing the game may never get to experience it. Finally are the patrols, which are the most boring activity available. Patrols task players with wandering around worlds in search of upgrades and communication devices that offer short missions. Without the laser sharp focus the other modes contain, things can get stale quickly, especially with only low level enemies in most places. The worst part is higher level gear requires hunting down materials, making these activities a necessity. 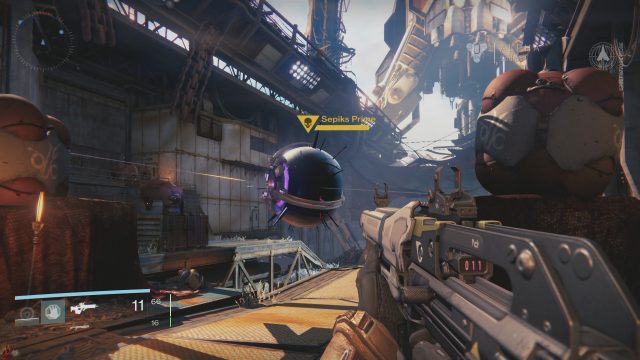 When I said beauty was in the eye of the beholder, that’s not the sort of beholder I was talking about.

There is also a Player vs. Player mode available called “The Crucible.” Though it lacks the diverse mode selection of Bungie’s previous first person shooters, it still is an addictive attraction thanks to how it ties in to the rest of the Destiny experience. The included modes are a variation on controlling territories, various team and solo death match variants, and occasional weekly or daily special game types. Weapons and armor are all evened out to put everyone near the same power level. This mostly works well, and the special properties like charge time and range on weapons are still there, making weapon selection an important process. Of course it isn’t perfect, as lower level characters will be lacking some abilities, but for the most part balance isn’t a huge concern. Bungie does run occasional “Iron Banner” events where players can face each other without this balancing in place. Players participating in multiplayer are rewarded with experience, currency for buying equipment from vendors, and occasionally random awards such as equipment. These rewards are nice when acquired, but are completely random and not based on winning or individual performance. In fact, the only extra bonus for winning a match is slightly more currency, so winning matches can feel pointless outside of the simple joy of victory. While this gives the less skilled players an equal shot at winnings, it also means some players may not put in much effort.

Advancement is the name of the game in Destiny, and all the activities players can partake in lead to rewards in the game’s one city, the Tower. Here players can find vendors for gear, meet with different factions to gain favor and get even more powerful gear, and also partake in bounties. Bounties have specific objectives in certain modes, such as completing five control modes in the Crucible, or taking down a certain boss in a strike. Completing this rewards experience, along with further advancement in the Tower’s various groups to work towards unlocking more powerful gear to purchase. It gives meaning to repeatedly going through Destiny‘s modes, and the different daily and weekly strikes offer more rewards. Advancement can feel tedious, especially because of its random nature. Rewards are often given out as engrams, which contain a random equipment item of one type, such as a helm. These will provide an item of at least the rarity of the engram, but will sometimes be something higher, or a rare upgrade item. The problem is these often provide an item of random class as well. It can be incredibly frustrating to finally get a very rare item only to find it’s for the wrong class. Bungie has already tweaked these systems to some extent, but further tweaking is certainly needed to smooth out the endless quest for better gear.

One area where there is little to no issues is the audio/visual department. Destiny is an absolute joy for the senses. Locations are vibrant and detailed, and jetting around the vehicles players are able to summon at will can be fun on its own without any other activities needed. The art is certainly reminiscent of Bungie’s work on the Halo series, but it still very much has its own feel to it. The game runs at a smooth framerate without any real drops. Audio similarly is fantastic, with many great themes providing an exciting backdrop to challenging boss battles and intense fights. The music consists of intense, epic orchestral arrangements with some rock and electronic instrumentation sprinkled in as well. The exciting soundtrack is very memorable and enhances the experience throughout. The voice acting is mostly enjoyable, though some may dislike the somewhat flat work of Peter Dinklage as the player’s robotic companion. Some surprising familiar voices such as Nathan Fillion show up, which is a nice touch. Even when dealing with the not so fun parts of Destiny, the game at least looks and sounds brilliant.

Destiny shows to be a promising new franchise and there are already lots of future updates and expansions planned. Whether or not it fulfills that promise is yet to be seen, but Destiny as it stands now is an amazing experience when it is at its best. While the game has many flaws, those with patience will find the best combination of first person shooter and RPG mechanics on the market. Although Destiny isn’t the brilliant start to a franchise that many had hoped for, it’s a great game for those who can push through its flaws and enjoy the ride.