Before there was recorded history, there was Amazia. This legendary continent lay somewhere in the western ocean, overflowing with fabled riches. And then it was gone, its cities destroyed and its peoples scattered. In the eastern lands its name became synonymous with wealth and glory, but none could discover the truth behind the myth. An archipelago retained the ancient name, but foul weather and wild currents prevented all from approaching. And then, a few years ago, the winds and the waters shifted, and a settlement was founded on the easternmost island. Despite the dangers, explorers pressed on, and first among them is the player’s character. Destiny Links is a game that is all about the exploration, and there will be lots of it.

Amazia is a chain of seven islands, with eight regions to explore. In all but one of these regions, the dominant feature is the Great Generator, a relic of a bygone era that could potentially bring back the golden age, if only they could be made to work. Unfortunately, the last time anyone tried, it reduced the archipelago’s last great city to a dust-filled ruin. That doesn’t keep the chosen inhabitants of the walled technopolis of Ecumene from experimenting, however. For the rest of the tribes of the islands — the diminutive Momes, the amphibious Stera, the secretive Fafne, the sedentary Planta, and the put-upon Mossmen — life is much more difficult. The player will have to do a lot of favors for the inhabitants of each island before they’ll reveal any of their secrets, and the boss for each level won’t even appear until the proper series of events has been completed.

This means that there will be a lot of talking. Thankfully, the game highlights all new conversation topics in blue, so the player can easily tell if something’s come up. Unfortunately, the NPCs just stand there and don’t do much else, even when they say they’re doing something. It’s very text-driven, so for players without the ability in Japanese, it can be difficult to keep up. The game does provide a very good menu interface and quest log, however, so sometimes it’s easier to keep track of the details that way. Also, there’s a news ticker along the bottom of the lower DS screen that gives updates for things like quest prompts, hunting challenges, monster scouting, and other services that the player can engage at the port of each island. 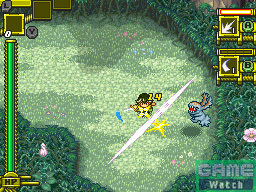 While there’s a plot to be had, it’s understandable if the player misses out on most of it. There will be plenty of NPC conversations to skip through as the game crams in the detail, but remarkably little NPC activity on screen. More disappointing is how the game finishes up. While there are some major revelations and accusations hidden in the NPC text, like how the Ecumene are supposedly creating new monsters in their quest to duplicate the power stones for the Generators, all potential plot falls apart when the player reaches the sanctum sanctorum of the final level. The anti-climax that follows should have been completely avoidable. All this game needed was an actual villain to back up some of the creepy foreshadowing, because its post-game Hard Mode would have made the perfect setting and excuse for some level expansions to go with the increased difficulty and item variety.

Instead, level design ends up as a bit of a mixed bag, which is unfortunate in an action RPG with an emphasis on exploration. More could have been done to make the levels more intricate, or at least to make it more difficult to reach the boss’s chamber well before its appearance is even unlocked on the quest line. Some of the later levels have more complexity, or even sections that lead the player in the wrong direction, but it’s a lot less than could have been done with this concept. There are also thirteen challenging and rare monsters that can only be found by hiring investigators to scout the area. Those often lurk a bit off the beaten path, but as said before, that’s still not too far afield.

The player’s ship is the most interesting upgrade option available. Different ships offer different services in terms of number and variety of shops. There are general stores for weapons and accessories that offer all sub-types for sale, but only up to A-class items. For S- and SS-class, specialists are needed. Other shops include the previously mentioned investigators, a rare material synthesizer, a hunting challenge coordinator, and a lottery. Ships can also carry between one and five crew members, who range from merchants in search of specific materials to crafters who can reduce item cost, all the way to ace reporters who can help find rare monsters more easily. Potential crew members arrive from time to time as more ships come in from the mainland, and it’s worth it to consider one’s roster occasionally. 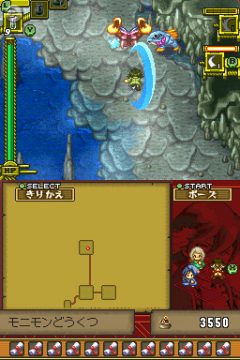 Down the crabby hole we go…

Destiny Links is an action RPG by format, though it lacks a few things usually associated with RPGs. There are no experience levels; instead, attack and defense are determined solely by equipment, and healing items work by percentages of the health bar. One of the primary motivations to explore is to find more raw materials, either from monsters or from excavation points, which can be used to make new equipment. Proceeds from the sale of unneeded equipment are the primary source of cash in this game, though quests are always generous with the cash rewards as well.

There are six sorts of weapons available in the game: swords, clubs / hammers, guns, alchemic tomes, medical texts, and weaponized hurdy-gurdies. There are also six attack types — slash, bash, pierce, fire, ice, and electric — that are spread across these weapon types. Swords can be slashing or ice-based, for example, while clubs can have electric attacks and guns fire attacks. As all weapons have A- and B-button skills that charge independently, some weapons can have a bit of both. Medical texts have most of the support skills, but some higher level examples of other weapon types have them as well. There’s a lot of variation even between weapons of the same type, though usually higher attack stats trump any other advantage. However, killing a monster with its attack weakness results in double the items dropped, so it’s good to keep some variety to one’s arsenal.

The player may also call on the help of mercenaries in battle. These characters have also been hired to safeguard the exploratory mission into Amazia, and their ranks change every time the player switches between islands. There will always be three available, for one use per trip through a level each. The power ranking for each mercenary, their attack type, and their cost in coin may vary by a lot, with E-rank helpers costing pennies and S-rank assassins demanding four-digit paydays before taking out a boss in one blow.

The sprite graphics are nice and all, but Destiny Links isn’t the most visually experimental of games, especially compared to some of the titles for the DS coming out at the same time in 2009. It does follow its own aesthetic well enough, and the boss monster designs are some impressive amalgamations of steampunk and kaijuu, but it’s interesting to imagine where a more adventurous graphical design crew might have taken this title. The character artwork and the intro movie sequence are actually quite lovely. 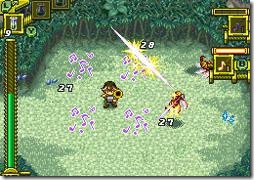 Likewise, the music is a good bulwark for everything this game is trying to do. The environmental themes are appropriate for their locales, and the special battle themes for bosses and rare monsters help step up the tension admirably. In the end, it’s a nice soundtrack, but not a standout one.

Finally, there’s the Wi-Fi connectivity options. As Nintendo pulled the plug on the majority of the DS wi-fi network a couple years ago, this part of the game’s pretty much a lame duck. Thankfully, it’s not a necessary part of the experience, but it could have been fun. Destiny Links had what was essentially a StreetPass option before StreetPass ever existed. Players could connect with friends over Wi-Fi to trade data, show off their achievements list in the game, or make use of a visiting friend’s ship to get access to stores that they may not have at that point. Also, there’s a fourth section of the mercenaries menu that would allow the player to call in a friend in time of need. That in itself would have been worthwhile to have at times in this game. The game was just a little too ahead of its time in this aspect, unfortunately.

Destiny Links has a lot of good ideas, but it feels like it’s missing a few that could have made it a much better game. It’s got a solid base with its basic action RPG strata, but would have been better served by taking its core concept to the farthest extreme. For a game so set around exploration, it doesn’t do much to explore the limits of its own sub-genre, and that’s a shame.