He Who Spanks Last, Spanks Death

DeathSpank! Vanquisher of evil, dispenser of justice, and hero to the downtrodden, this mighty, thong-clad hero scours the world in search of the mysterious artifact known only as The Artifact. His journey is fraught with peril and side quests, but DeathSpank trudges forward into the wild, unphased or possibly oblivious to the dangers that lurk ahead. He is the last hope for mankind, and this is truly a disturbing prospect.

The brainchild of Ron Gilbert, acclaimed creator of the Monkey Island series of adventure games, DeathSpank is part adventure game, part hack’n’slash RPG, and the amalgamation works wonderfully. DeathSpank is a charmingly bombastic hero; he has a clever adjective (or several) to describe everyone he meets, he shouts all the time, and despite his penchant for chit-chat, he’s happy to slay anything and everything for anyone, no questions asked. The people he meets are equally eccentric, whether it be an unusual occupation, bizarre hobby, or just good old-fashioned insanity. From Eubrick the Retired, former hero/stable girl, to Snitch the Leprachaun, an eye-witness about to turn state’s evidence and defect to gnomehood, every character is memorable and ridiculous.

As DeathSpank wanders the surprisingly large world, these people he meets all have various tasks for him to complete, which range from the mundane to the spectacular. These quests are where the adventure and RPG elements of the game merge, as most of the time these quests see DeathSpank slaying foes for whatever bizarre trinkets they might carry. Quests do vary a bit, but the typical MMO-style staples are there. Occasionally you’ll come across a quest that involves an adventure-style puzzle, usually requiring the player to manipulate various items in order to produce the desired result. A quest early in the game requires you to find red demon horns. However, the only demon horns you can find are white. Thus, you must find a way to dye the horns red before turning in the quest. 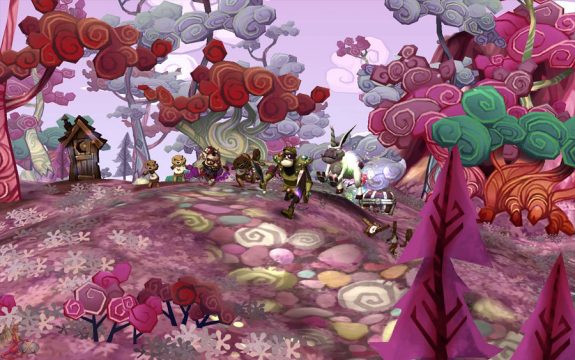 The game’s combat system is simplistic, but frenetic and enjoyable all the same. Like other hack’n’slash games of its ilk, DeathSpank wades through hordes of foes, slashing wildly until everything lays dead at his feet. DeathSpank can equip up to four weapons at a time, each one mapped to one of the four face buttons on the controller. Although the game doesn’t have any magic per se, there are several different types of weapons that allows for a fair bit of customization. There are basic physical weapons like swords and clubs, but there are also elemental weapons which deal additional fire, ice, nature, or undeath damage. There are also crossbows, which allow DeathSpank to fight from a distance. Finally, there are justice weapons, which normally deal plain physical damage, but under special conditions, unleash a unique attack.

To unleash the power of justice weapons, DeathSpank must first fill the justice meter, which is accomplished quite easily: by attacking. Normally, the justice meter fills at a decent pace, but it can be filled much faster by alternating attacks between weapons. DeathSpank can combo up to seven attacks by swinging a different weapon with each attack, and the justice meter fills faster each time. Once it’s filled, the next attack performed by the justice weapon will unleash its unique ability. Further, as DeathSpank explores the world, he’ll discover special runestones, which allow him to combine his justice weapons with elemental ones to power up their special abilities. This is accomplished simply by attacking with both weapons simultaneously.

DeathSpank also has a wide assortment of potions, food, and consumable weapons at his disposal. Food heals him over time, but is interrupted if he attacks or takes damage. Potions provide all sorts of effects, not only the typical health potions, but armor potions, stealth potions, resistance potions, and others that can be used in various situations. Finally, DeathSpank can make use of a bizarre assortment of attacking items, which do everything from firing chickens to summoning black holes. 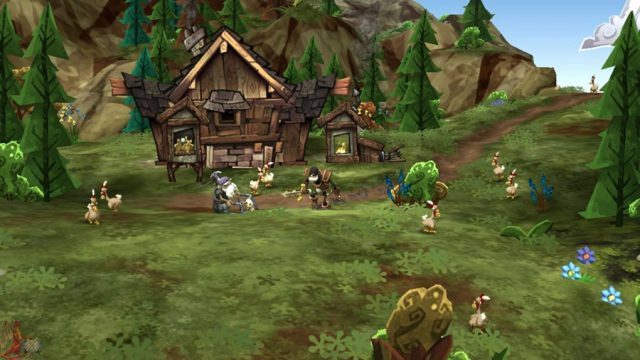 Despite its relatively simple gameplay, DeathSpank is a surprisingly challenging game, although it does have multiple difficulty settings. Simply rushing into combat, swords flying, is a sure way to get killed, and players will need to use a bit of strategy in order to succeed. This can include kiting enemies around while eating, pulling enemies to a better location, and making good use of DeathSpank’s blocking ability.

DeathSpank‘s aesthetic quality does not end with its goofy and generally hilarious story. It’s visuals and audio have an equally terrific charm. The world is presented with an almost storybook quality. New environments rise over the horizon as DeathSpank moves, as if he were running across a globe. All the objects in the environment are completely flat, which gives the game the appearance of a pop-up book. The 3D character and enemy models aren’t nearly as impressive as the environments, but the art design remains terrific. The enemies, in particular, are almost as bizarre and hilarious and the conversations that lead to their eventual slaying.

The music and voice acting are quite frankly spectacular, especially considering the downloadable nature of the title. The game is fully voiced, and the voice acting is fantastic. Each character hams their lines up in a perfectly appropriate way, enhancing the silliness of every situation. The music is equally terrific, sporting a boisterous, jazzy style that fits DeathSpank to a tee.

Although DeathSpank is only roughly ten to fifteen hours long, it provides plenty of bang for your buck. Great humor, solid gameplay, and a great visual style all help to bring DeathSpank‘s unique world to life. The game closes with strong hints of a sequel, but with Ron Gilbert having left Hothead Games upon the completion of the title, it remains unclear as to whether one will ever see the light of day. I, for one, am hoping there will be. DeathSpank is a hero that I definitely want to see more of.