After Compile Heart set up an intriguing premise with a well-told story in last year’s Death end re;Quest, the announcement of a sequel came as no great surprise. In broad strokes, Death end re;Quest 2 carries over most of the first installment’s major aspects — both good and bad — while also distancing itself enough from its predecessor to make it feel almost standalone. However, the removal of a number of unique ideas previously implemented means the shortcomings are much more apparent this time around, and the formula established by the first game is starting to wear woefully thin.

The sequel takes place in the sleepy Eastern European town of Le Choara, which has little to offer aside from the Wordsworth Women’s Dormitory and a cathedral dedicated to the worship of El Strain. After killing her abusive father in self-defense, Mai Toyama enrolls at the all-girl academy-slash-orphanage, in search of her sister Sanae who was also at the academy but is now nowhere to be found. Mai meets the other two protagonists — Rotten Dollhart, daughter of Wordsworth’s headmistress, and Liliana Pinnata — and the story ensues.

Early on, the narrative revolves around Mai’s search for her sister while getting acclimated to her new surroundings, before eventually veering off into new territory as new discoveries are made. Each chapter during the game’s 25-hour campaign follows the same general structure of visual novel sections for the group to proceed through during the daytime, followed by dungeon runs each night. The VN sections are padded out by a number of optional encounters with other members of the academy’s student body each day, framed by compulsory scenes that push the main narrative forward and bookend each day. 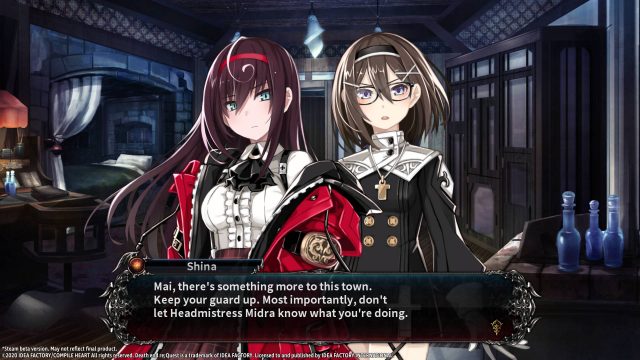 An early setup for a decent mystery that plays out.

Unfortunately, the quality of writing within the VN portions of the game fluctuates wildly. While the main story — concerning the events in Le Choara — is interesting and generally well told, the mini stories that should serve to provide characterization to the dozen or so supporting cast members are quite dull. All of the characters are thrown at the player in short order, and each one boils down to “the one that reads books” or “the one who’s a snob”, and without anything more substantial or an active role in the main story, they’re all far too forgettable. On top of that, the English voice acting, while of high quality, is once again only present for some scenes, being generally reserved for the main plot, causing the remaining cast to miss out on any auditory distinction to boot.

The main story sequences, where the mystery around Mai’s missing sister and the other disturbing events occurring nightly slowly unfolds over the course of the game, fare far better, with higher-quality writing and great voice acting. Going from fully-voiced to text-only sequences is just as jarring here, but occurs less frequently. The extreme violence the first game delighted in has also been toned down at least a little, though disturbing imagery is still plentiful. The death ends themselves — scripted, over-the-top death scenes — are also still present, but reduced in number.

As engaging as the main story is, it barely meshes with the previous game’s established narrative. The inclusion of Shina Ninomiya, the first installment’s protagonist, as a playable character seems to connect the two games by default, but there’s very little that links the narratives in any discernible way. The designers go so far as to make the remaining previous cast members, with the exception of Arata, digital avatar stand-ins during dungeon runs, but with absolutely no presence in or bearing on the story. In fact, it isn’t until a second playthrough that a scant few visual novel scenes are sprinkled in to provide a still-unsatisfying and unclear bridge between the two titles. 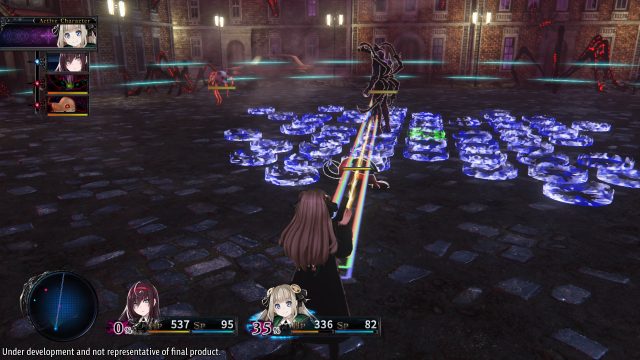 Combat has barely changed at all, and what little is different is not for the better.

While the narrative doesn’t consistently meet expectations, it’s still better than the other main portion of the game, as subpar dungeon runs filled with frustrating combat rear their ugly heads. Bland city streets don’t make for interesting environments to explore, and with the Wordsworth academy situated in the town’s center, all dungeon runs feature the same bog-standard cobblestone alleys and pathways, only occasionally branching out to the no-less-dull forests and pastures surrounding the town. Other than using the in-game map to run from point A to point B, there’s only the occasional roadblock that requires either a numeric code or item to open, and a handful of interactive objects that can be manipulated by Mai, Rottie, or Liliana. It’s all rather cookie-cutter, unfortunately.

But the least enjoyable aspect of dungeon runs, for the second time in a row now, has to be the battle system. What was already a chore previously has been made even less exciting and more obtrusive in the sequel. The rather generic enemies are far too often bloated with HP, needlessly drawing skirmishes out. Bosses quickly feature HP in the millions, making them true tests of attrition and perseverance through boredom. The core combat mechanic of sending enemies flying into the arena walls, each other, and other party members for bonus knockback damage remains, while the Battle Jack abilities that would previously change the flow of combat have been removed entirely. The clumsy elemental rock-paper-scissors system is retained as well, though it rarely works as intended. It’s far more effective to simply spam the heaviest attacks possible, particularly since level-ups that restore all spent skill points back to maximum occur frequently; having the girls morph into their scantily-clad glitch mode alter egos puts even more power behind every attack. Every battle becomes a rote sequence of going through the motions, and while it eventually wore out its welcome in the previous game, it never even has an initial spark of interest in this installment. 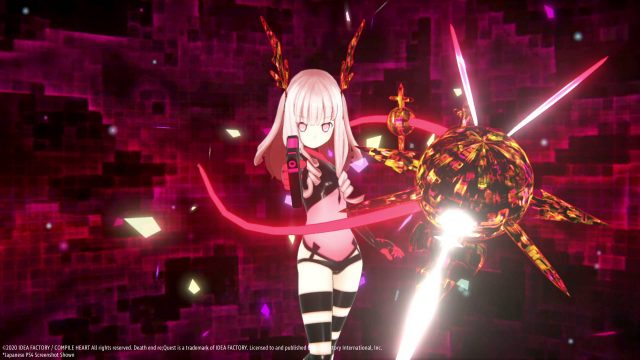 Glitch mode is back, with three new characters to exploit.

There’s some merit to the game’s presentation value, which recreates the style of the previous game to a tee. In fact, the soundtrack consists of a large number of the exact same tracks, lifted and copied wholesale; they’re good, but we’ve heard them all before. The visual novel sections are still the game’s graphical highpoint, with colorful full-scene backdrops and large, lightly-animated portraits for the main protagonists.

Death end re;Quest 2 tells a decent story in and of itself, and does so with good overall production values, at least on the visual novel side of things. But whereas the first game clicked with me better and made me generally interested in what was to follow, I’m afraid that my anticipation for a third installment is at an all-time low now. The already-repetitive combat has been further stripped down, and is now something I actively dislike about the game, and while the story sort of works as a standalone project, the attempts at tying the two games together are puzzling and tenuous at best. The game is not entirely without merit, but the overall picture being painted is now one of a fractured franchise whose parts don’t mesh well with each other.