There’s something not quite right about Darksiders II.

As I’ve been playing the game over the past three days, my mind has been trying to coalesce exactly what it is that seems off. For all intents and purposes, Darksiders II is a fantastic game; finely crafted and meticulously polished until every last cog and gear fits neatly into place. Apart from a bit of a screen-tearing problem and some spotty platforming controls, it’s mechanically and technically sound. And yet, despite having everything I would normally enjoy in an RPG, I just found myself wanting it to be over.

The mechanics are definitely not the problem. In fact, Darksiders II improves on the original in nearly every way. In the sequel, players take on the role of Death, brother to War, the protagonist from the first game. Another of the Horsemen of the Apocalypse, his journey runs parallel to that of his brother as he tries to redeem him by resurrecting the now extinct mankind. Death can wield two weapons in combat, his always-useful scythe, which he splits into two separate sickles for rapid attacking, and a secondary weapon that can be chosen from any number of types — hammers, maces, gauntlets, claws, glaives, and others. During combat, he can make use of both weapons interchangeably to string together combos, while simultaneously dodging attacks, utilizing several different available tools, and launching powerful wrath skills. His combat style is more fluid and fast-paced than War’s, and is very similar to Kratos of God of War.

Darksiders II takes things several steps farther towards the RPG genre by including levels and experience, two skill trees that can be invested in, and a full-fledged Diablo style loot system, without sacrificing the Zelda-inspired dungeon delving and puzzle solving. Players will have much more control over Death’s growth than they did with War, and they can even create completely customizable weapons by feeding unwanted equipment to special possessed ones. This feature in particular stands out as one of the most intriguing, as the possessed weapons can draw on the special attributes of whatever they eat, allowing players to pick and choose which enchantments they want to have in effect. 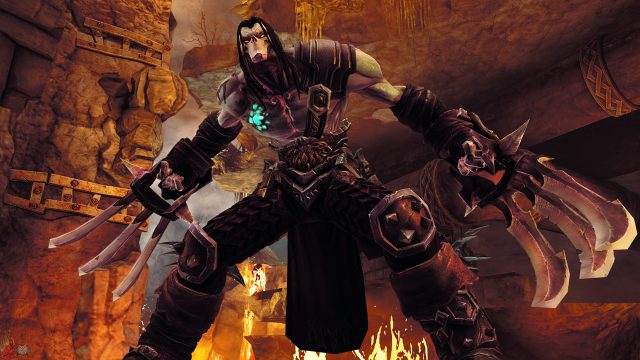 The designers couldn’t figure out how to make Death any more badass.

The level design certainly isn’t the problem either. Again, Darksiders II improves tremendously over the first, with expansive dungeons featuring brain-bending puzzles and an ingenious use of the tools at Death’s disposal. Many puzzles require surprisingly outside-the-box thinking, and regularly use multiple tools in conjunction for unique and unusual purposes. On top of that, the levels are littered with Prince of Persia-style platforming challenges. Though they’re rarely tricky to complete, they add yet another facet to the gameplay, especially when they intermingle with the puzzles. Indeed, this is some of the best level design you can find in a video game.

And yet that off-putting feeling is still there. In the end, the problem isn’t the mechanics themselves, but rather the entirety of the package. Something about it feels inorganic, as if it were designed by committee. It’s a well-oiled machine, yes, but it’s a machine. The problem, it seems, is that Darksiders II just doesn’t have an identity of its own. In its attempt to create The Ultimate Game, lifting the best mechanics from virtually every well-known, successful franchise of the last five years, it loses its soul, so to speak. The original Darksiders was also highly derivative, borrowing from many different franchises, but there’s something fundamentally different between Darksiders II and its predecessor, and it’s that intangible quality that makes the difference.

The first evidence of this problem emerges from the story itself, which is an absolute train wreck. Darksiders didn’t have a particularly intelligent plotline either, but it’s not the sequel’s absurdity that’s the problem, but rather the simple fact that its writers don’t seem to care about making it intelligible. Even the game’s settings seem random, chosen for the sake of variety rather than any actual merit to the story. Death’s journey begins on a random, icy mountaintop, then quickly moves to a fairly generic fantasy land filled with dwarf-giant “Makers” and stone golems. There it languishes for the first half of the game as players seek out a series of macguffins. It moves to the land of the dead, which is an equally generic gothic fantasy setting. Again, players must seek out a series of macguffins before moving on. Unlike the first game, which took place entirely within the devastated remains of Earth, there’s no sense of cohesiveness here. Even Death himself suffers from being completely unimaginative. He’s the typical smarmy, self-confident action hero that gamers have been saddled with for decades. He makes the occasional snide comment or boastful threat, doing his absolute best to look badass and super cool, and he does a good job of it too. But it feels forced. 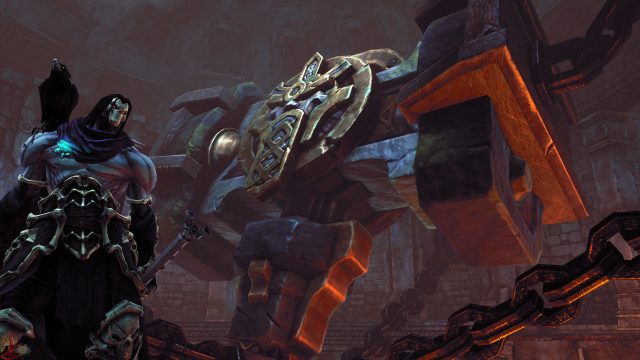 Then they gave him a crow.

Looking at the mechanics, the same problems arise. The RPG elements feel tacked on and unnecessary, as if they were added not because they were important to the gameplay, but because they’re the popular thing right now. The skill trees in the game only affect your wrath skills, which have less of an impact on playstyle than one would expect. Likewise, the loot system is pretty unnecessary when the best weapons are crafted manually by feeding possessed ones. There’s a variety of special stats to be found on armor, but with no real class systems to make use of them, it’s little more than a facade. The experiences from one player or the next aren’t likely to vary wildly in any manner whatsoever.

Darksiders was a very derivative game, but it owned its identity thoroughly. It knew exactly what it wanted to be, and ran with it. It took its borrowed mechanics and thrust them into a unique setting, never compromising its overall vision. The environments, the enemies, and even the characters all shared a commonality that held the game together. Though it may not have gone as all-out mechanically as its sequel, the whole thing felt like a single entity rather than a mish-mash of popular ideas. Darksiders II fails in this regard. Though the pieces all fit together, it’s clear you’re looking at a puzzle and not a picture, designed to tickle a gamer’s reflexes but not his imagination.

Though this might seem like a gripe, Darksiders II is not a bad game. Its mechanics are tightly crafted and there are plenty of exciting battles and twisted puzzles to work through. But don’t be surprised if everything feels very familiar, and don’t feel ashamed if you’re inclined to simply turn it off. After all, you’ve probably played this game a hundred times before.