The Serious Business of Being Silly

In the dire summer of 2020, I had a need for something simple, something silly to play and enjoy without a heavy plot or pressing motivation. There had been enough of that this year as it was. So when I heard that Dandy Dungeon: The Legend of Brave Yamada had had its sequel material included as a post-release update to the base game, I grabbed it. This was a game from the same creative minds behind such oddities as Chulip, Chibi-Robo, and Moon: RPG Remix Adventure, so even though I was wary (and still am) of anything with a DMM Games logo, I figured this would be an interesting experience.

I figured correctly. Dandy Dungeon succeeds at being a game of its original milieu, i.e. an easy to play smartphone title with simple controls and simpler narrative that provides fun gameplay well beyond the time it takes to complete its nominal main quest line. It also succeeds at being an incredibly meta experience that constantly pokes fun at itself, its genre, its creators, and more Japanese cultural touchstones than could be easily fit into the space of a single review.

The titular character, Yamada-kun, is a game programmer who works for a subsidiary of the Empire Corporation, a monolithic business that seems to own and operate everything in Tokyo, but he’d be the first to admit that his life’s a mess. He’s thirty-six, overweight, starting to lose his hair, with questionable hygiene, and living in a one-room apartment of unfortunate bachelorhood. By anyone’s measure, he’s a loser, and almost everyone in the game will say as much to his face on at least one occasion. But he’s got a dream: to have the freedom and the courage to sit around in his underwear all day long, programming his vision of a perfect video game. His life may suck, even before he is summarily and insultingly fired from Empire Corp. five minutes into the game, but he’s determined to “channel this suck into videogame!” 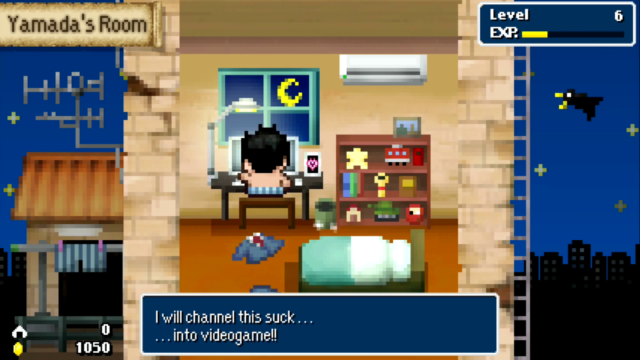 He’s got some issues to work out. Some of them grammatical.

The entirety of Dandy Dungeon takes place in Yamada’s apartment. The dungeons are levels in his game, created to work through his stress and personal issues, while occasionally being suborned by Empire Corp. hackers who add new enemies with the intent of driving him nuts. As he sits at his desk, in his underwear, he debugs the levels by playing them, and the dividing line between the virtual and the real gets blurred and bent with great frequency. Through forests, caves, and haunted mansions must the brave hero Yamada quest, so that eventually Yamada-kun might have a chance at a Happily Ever After with his cute next-door neighbor, Maria.

The game itself is a rogue-lite, with the hero Yamada starting each dungeon at level 1, but with equipment and tools chosen by the player. At the start of each floor, a route must be drawn for Yamada to follow on automatic, taking him around or through various treasures, traps, obstacles, or monsters along the way. Each floor panel passed over will fall into the digital void, so there is no walking back or crossing paths, but if he manages to traverse every possible tile he will receive a bonus of cash, materiel, or equipment. These bonuses are lost in full if he is defeated, or in part if he chooses to run away at the start of a new floor.

As mentioned above, this was originally a title for smartphones, and as such was designed with a certain style of touch controls in mind. It is also playable with a mouse or keyboard controls, though the latter is the less wieldy option.  The difficulty can also be uneven, in keeping with the way that smartphone games ramp up the challenge to encourage more frustration with a level (and more microtransactions to bolster the player), and this is especially apparent in the last levels. 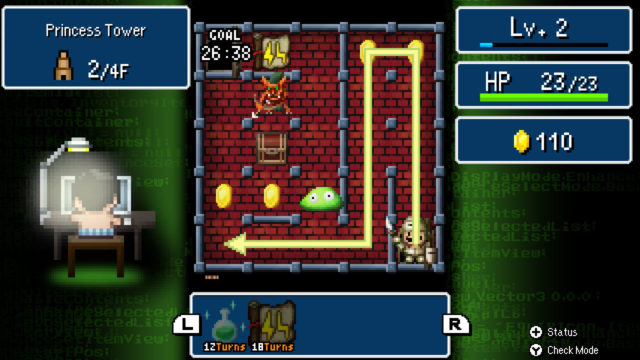 What often makes or breaks a dungeon challenge is Yamada’s loadout. There are dozens of items to use, for healing or support, attack or defense, and several have environmental effects that can be used to access secrets in certain dungeons. Every item has a charge time before it can be used, and this time increases with each subsequent use until the item eventually breaks. Broken items are still useful as components for equipment upgrades, however, so there is some incentive to not conserving stuff.

The equipment list is even more varied, with one hundred sixty sets of costumes. Some are described in the equipment details, while others have to be pieced together through guesswork and the silhouette in the costume gallery. Every complete costume has special skills, some general and others unique, on top of whatever the equipment has on its own. These skills can reduce some challenges to triviality, allowing Yamada to retread old levels swiftly and surely as he fights for funds and materiel to carry on, or else to boost his score for the online leaderboards.

All dungeons in the main quest are timed and scored, with bonuses for speed and perfect completion, but scores can be disqualified if the player makes use of revival rice balls, teleport scrolls to skip floors, or summons scrolls to take out large groups of enemies. The game even calls the player out for ‘cheating’ in those instances, but otherwise there are no real repercussions. 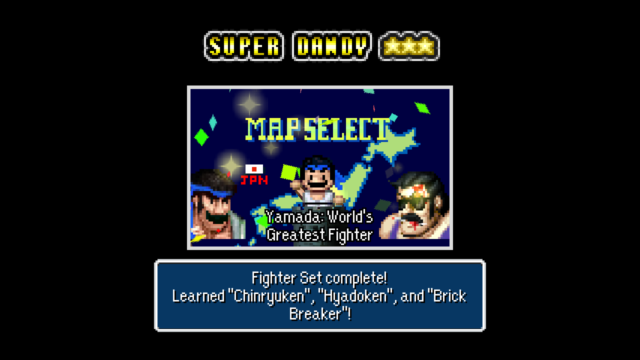 Some references are more on the nose than others.

Overall the version of Dandy Dungeon for Steam has done a good job of converting from its smartphone origins. Elements such as daily energy limits for dungeon delves have been eliminated, and items which supported those elements have been repurposed. The paid DLC items of the mobile game become available in the Steam version via the special store “Mamazon” in the post-game, without the need for real cash to purchase, and many of the special event dungeons are now included under the side bar of Special Quests. Nothing of import appears to have been excluded, but that doesn’t mean that it’s necessarily easy to access. This is a game whose main quest can be completed in under forty hours in spite of the occasional difficulty spike, perhaps even under twenty for those who are focused and well-informed, but with the abundance of side content available it’s possible to spend over a hundred hours and not finish it all.

The musical content in this game strives to be generic, resulting in tunes that sound like they could have come from any number of 16-bit games that the player can barely manage to recall.  Again this seems an intentional decision on the part of the developer to riff on the genre.  The characters are all voiced, but in the style of Moon: RPG Remix Adventure the voices are scrambled gibberish that somehow sounds like it could mean something. Yamada-kun is the only one who says anything remotely intelligible, and even that is reserved for situational exclamations such as “Bokyuun!” and “Arabesque!”  The funniest moments are in dungeons, when Yamada sings along to the Game Over music or announces special challenge floors with a “Da-da-da da-da-da DANGER ZONE!”

Now included with the Switch and Steam versions is the game’s nominal sequel: Dandy Dungeon II – The Phantom Bride. This is actually more in the way of a post-game expansion pack in that it’s not possible to play it or understand it without getting through The Legend of Brave Yamada first. It presents the player with a large number of dungeons all based on the train stations of Tokyo’s Yamanote Line, playable in mostly any order. These dungeons are all designed for extra challenge, with special mission conditions to fulfill or prevent in order to succeed.

It is in these later levels and special quests that the game goes from weird to bizarre. There are cat-girls who wear actual cat skins, cram school automatons, zombie J-pop groups, love hotels catering to pigs… The list goes on and on. In the special quests there are things like a rogue-lite golf course, a hot springs bathhouse with near-to-full frontal porcine nudity, and an alien-infested cattle ranch owned by famed game music composer ‘Nobiyo’ Uematsu, who flies around mostly naked on a UFO as he insults Yamada’s skill at video game musical composition. 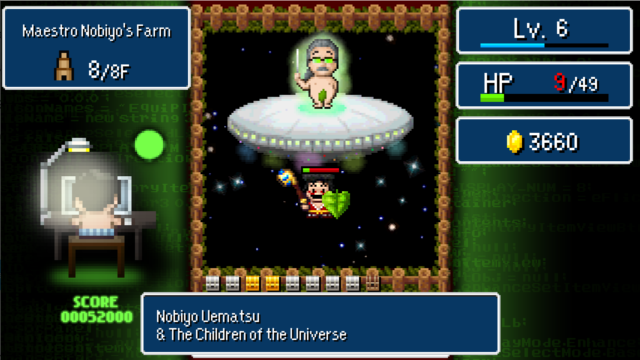 In short, it is hard to say how one might go about making a weirder, more avant-garde experience than Dandy Dungeon. For all that it is a standard rogue-lite in style, and a post-smartphone title in mechanics, it bears all the hallmarks of an Onion Games production, and even features a translation by the same guy who did the English version of Moon: RPG Remix Adventure. It gets to the point where one can’t even critique the grammar and syntax, because there’s no telling what was an honest mistake and what was done intentionally for effect. That is entirely par for the course with this game.

There is no debating the fact that it was an experience unlike anything I could have imagined, even as it was every bit as weird as expected.  It was easy to play and difficult to beat, with tons of content and a few ounces of sense.  Fans of the weird and fans of the rogue-lite should all take note.