Imageepoch’s Criminal Girls: Invite Only started off life as a 2010 PSP title released only in Japan. This release managed to garner enough interest for an enhanced edition on Vita to appear in Japan in 2013, which has somewhat unexpectedly managed to make it over to the West courtesy of NIS America. While there are some interesting aspects to the game and it starts out well enough, things simply don’t hold up for the duration and the overall result is just a mediocre dungeon-crawler at best.

Criminal Girls‘ premise sees the player character starting a new job in Hell, tasked with looking after seven girls in the reformation program. These delinquent girls have died before their time and could actually do enough to earn a permanent place down below. As such they have been granted the opportunity for revival in the mortal world should they pass four trials, which involve beating up various monsters and bosses in four or five-floor dungeons.

The girls quite quickly become likeable enough and have decent chemistry, but there’s not much to see here in terms of actual plot. The actual backstory to their sins isn’t revealed until late in the game and adds some character development, but is a bit of a stretch at times. It does the job of giving players an indication of progress, but isn’t noteworthy in any way.

Rather than giving players total control in turn-based battles, each of the four active party members shouts a suggestion for the turn. Only one of these actions can be selected each turn, although players can swap out one character and use an item per round as well. This doesn’t apply to enemies, who can all act per turn, although as most battles are against one to three opponents this isn’t much of a hindrance. Unfortunately, while the system is mildly interesting for the early portions of the game, it quickly starts to become stale with very little variation in how battles play out. The drawbacks to relinquishing control also become further apparent as more skills are learned by the girls. The game is still good at providing guarding and healing options when necessary. Getting a desired attack option becomes much more reliant on luck than any other factor, and waiting for one to show up in battles where enemies have healing skills is especially annoying. 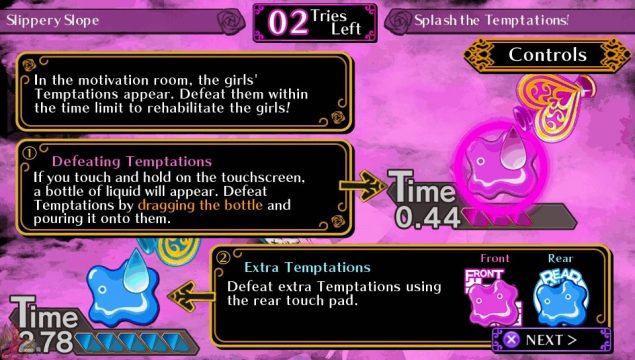 Do not question why this results in battle skills, down that road madness lies.

One key part of Criminal Girls involves Motivation sequences, mini-games that see the player use implements — a whip, a shock probe, slime, and a feather — to supposedly make the girls obey orders in battle. How these play out in the game is that points are earned towards learning a new skill depending on the players’ performance in the relevant mini-game. In addition to the skill points, the more times a girl is motivated, the more fog is removed from the image of her in a rather suggestive pose wearing certain unlikely outfits seen exclusively in this part of the game. Some small edits have had to be made to these sequences; adding in a bit of extra fog in strategic areas and removing the moaning. Ironically enough, in some cases the visual edits almost seem to make things more suggestive.

Ignoring any potential concerns about the general idea of the motivation sequences, which are going to vary heavily between readers, there are still significant issues with it. The whole premise of the girls actually needing motivation appears to go out of the window within the first quarter of the game, and the mini-games themselves aren’t particularly engaging. All require similar repeated actions on highlighted parts of the two touchscreens and, while it is something slightly different to do for a brief time, it adds nothing to the rest of the game. Unfortunately for those who do have objections to the content, going through it is pivotal to progress. 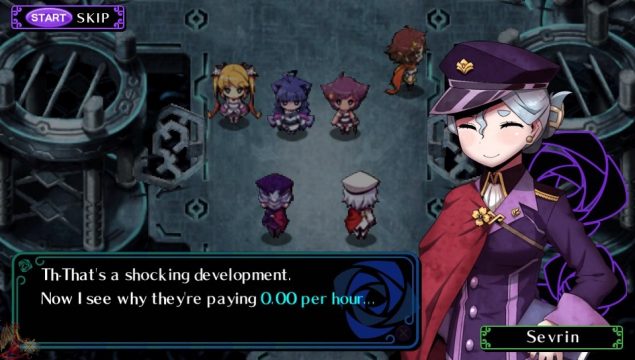 To get in this situation, our protagonist is the required level of RPG-idiot.

Dungeons are somewhat disappointing, as all follow the same basic structure and there’s almost zero visual change between floors in each. While there are treasure chests and dead ends, it’s still just a straightforward wander through punctuated by plenty of random battles. The saving grace is that they aren’t very long, so while there’s still nothing overly interesting, at least things don’t become too tedious. Any puzzles are trivial, and pretty much solved by the girls themselves, with the player just ending up having to follow their instructions. Plenty of backtracking will also be forced on the player in both the girl’s individual sidequests and latter portions of the story. Enemy design is also woefully unvaried, and not at all exciting, particularly with the minimal animation and detail on the battle screens. There not too much to say with the audio: the music is decent but limited in the number of tracks, and the game’s Japanese voice acting is fine but easily ignored.

Difficulty of various sections is almost entirely dependent on the level of the party. There are significant bumps between dungeons and for bosses — the jump for the final boss naturally being largest — but these are handled by just spending a bit of time grinding. There’s little tactical nous needed and the battle plan required for victory is constant throughout. Players can expect to spend around twenty-five to thirty hours getting through the game, with multiple endings maybe encouraging a replay, however, these can all be unlocked by simply reloading a save file just before the final boss instead. There’s no New Game Plus to speak of, but those willing to jump through a couple of hoops after completing the game can unlock the Vita enhanced edition’s extra dungeon, where the game’s two NPCs also become playable.

Criminal Girls quite ably eats up a good few hours early on, but simply fails to provide enough of a lasting experience to recommend. There are some interesting aspects, and it helps cater to a niche, but it’s hard to find any area in the gameplay where things haven’t been done considerably better elsewhere.