If you had a brother or sister growing up, then Costume Quest will speak to you whether you like it or not, much like that pesky sibling. Not only does it capture the spirit of Hallowe’en, but it perfectly encapsulates the brother/sister relationship into a short, six hour period. In fact —

HEY! That’s not fair! Why do you get to talk first? I wanna talk first! I have the important things to say!

Get out of here, Sam! I’m the reviewer here. These are kinda my thing.

Just because you’re some “big shot reviewer” dude, that doesn’t mean you get to tell me what I can and can’t stick my nose in!

Maaaaaaaaac! Sam won’t stay out of my review!

Play nice or I’ll take away your controllers.

Fine. Make yourself useful then and talk about the story.

Fine, I will. And I’ll do an amazing job at it! Costume Quest is the story of two siblings and their first Hallowe’en in a new town. Reynold (who’s a wiener) and Wren (who is awesome), are eager to go out trick-or-treating, but neither wants to go out with each other. When their mother makes an executive decision as to who is in charge for the evening, Reynold and Wren set out enroute to collect come candy and meet their neighbours. Unfortunately, meeting the neighbours means meeting some Grubbins who are out to steal all the candy to feed their overlord. Whichever child the player doesn’t choose as their main character is kidnapped by the Grubbins, all because they mistake them for a big piece of candy corn. 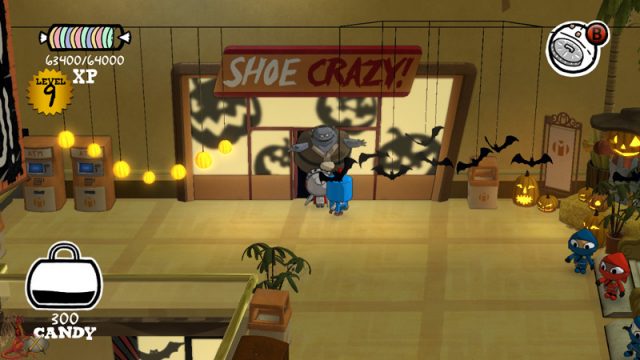 Let’s go to the mall!

That’s just the lame set up. The real story starts when you meet an evil witch who’s plotting to steal all the candy in town for some nefarious reason. That’s when you use your wicked awesome costume powers to fight the monsters and save Hallowe’en for the entire neighbourhood. You travel from your home neighbourhood to the mall and finally to a country carnival, all in the pursuit of justice and more candy.

Don’t call my setup lame. I’ll knock your block off! And then I’ll take your candy too. Besides, you didn’t say what kinds of cool costumes you get to use. There’s a robot, a vampire, a knight, a space woman, a kitty, and a UNICORN!

Hey, don’t you try to girly this game up. That unicorn is bad ass! In fact, every costume in the game is amazing once you enter combat. Even the crummiest of costumes become titanic pinnacles of cool, getting a hyper-realistic makeover. A cardboard robot costume becomes a massive Gundam-styled robot, a cheap ninja costume becomes a sleek killing machine, and yes, the goofy unicorn costume with the cardboard box sticking out of the butt becomes a gigantic rainbow-colored stallion that uses its massive horn to impale whatever stands in its way. Combat is pretty simple: each character gets a turn, and during their turn they can perform a basic attack or a special attack which takes a few turns to charge up. Each costume’s special attack is unique, each one has its own special animation sequence, and each one is useful. Whenever you use a basic attack or are in turn attacked by foes, a simple quicktime mini-game appears that can increase the damage you deal or decrease the damage you take.

Blah, blah, blah, blah. You talk too much. Stupid boys and their stupid obsession with violence. Besides there’s more to the costumes than just battle, and even then the combat of Costume Quest is fairly simplistic, though if you’re someone who isn’t good at timed button-pressing, it can be a bit of a challenge. Anyway, costumes do more than just defeat evil doers. They can also help in solving puzzles, removing barricades, or getting out of sticky situations. For example, the robot costume has the ability to boost around the screen and move over ramps. The knight costume has the ability to shield its wearer from falling objects such as nuts, debris and water, and the ninja can sneak past grown-ups and foes.

Too bad most of the movement abilities are underused, and not all costumes have one anyway. For the most part, the neighbourhoods you visit are one big puzzle. Costume Quest‘s core gameplay involves going around town and trick-or-treating at every house in each neighbourhood, which opens the way to the boss and next area. Each house has either a friendly grown-up who’ll give you candy or a monster that must be defeated. Movement abilities and new costumes come into play when an obstacle prevents you from moving forward. Most costumes have a 3-part pattern, and each piece needs to be acquired before the costume can be worn. Once you have the costume needed to press forward, most of them don’t see much more use outside of combat. 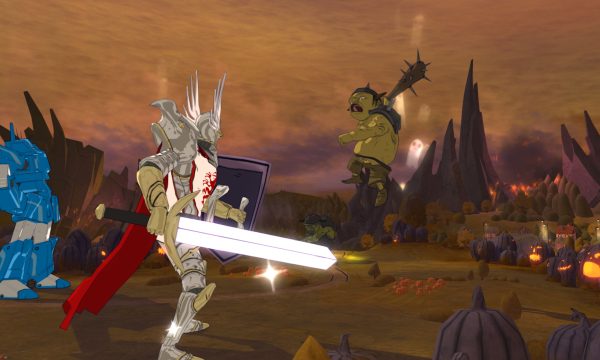 Trick or treat, smell my feet, give me something good to eat. If you don’t I don’t care, I’ll just beat you down with my enormous sword of smiting and giant robot lasers! Pew pew! K-chang!

I’d hate to agree, but Adriaan has a point here. With the costumes being underused outside of combat, and some not even having special abilities, it’s a little disappointing considering the game’s overall creative concept. Sound-wise, there isn’t really much music in the game, and a lot of the sounds heard come from background noises within the neighbourhood, which oddly works but still feels lacking. What isn’t unsatisfactory is the game’s presentation and visuals, which perfectly match the theme of the game’s story. From the round-headed, big-eyed kids to the cartoonish environments, and even the spooky designs of the bosses, it shows that Double Fine was targeting the game towards younger audiences, and those who are young at heart.

There’s a certain duality to the visuals, as well. While I’m sure Sam here is gushing over the cute children and their wee little costumes, in combat the visual style takes a turn for the surreal. The costumes shed their cutesy charm and become hulking monsters that tower over the entire town, quite literally in fact. Battles all take place in the hills surrounding each neighbourhood, with the houses and people being little more than ants beneath the combatants. The audio is a bit on the disappointing side, unfortunately. What little music exists is great, providing an appropriately Tim Burton-esque charm, but the lack of voice acting is extremely noticeable, particularly since text advances automatically during cutscenes. It seems as though Double Fine might have run out of time or money and skimped in this department.

Oh my god. Did you see the little wee ones dressed as bananas? They were SO adorable!

I hate you. So much.

You know you love me. You’re just jealous ’cause I’m Mac’s favourite and you’re not. Besides Mr. “Reviewer,” you forgot to mention that Costume Quest is full of collectables. Throughout the game you can collect Creepy Treat Cards which can be traded with other trick-or-treaters for special items or costume pieces, bob for apples to win candy (the game’s currency), and of course the many fetch quests that must be taken in order to progress the story. Did I mention the Super-Awesome-Patriotism party where everyone is dressed as President Lincoln? There’s also another set of collectables that can help characters increase their combat skills called Battle Stamps. Battle Stamps must be purchased using candy, and can be equipped to provide special abilities such as terrifying foes, throwing toilet paper, gaining hit point boosts, and many more. There’s a ton to collect, making it one of the more enjoyable aspects of the game.

I was actually just about to mention that if you would shut up and let me do the talking. In any case, Costume Quest is a surprisingly fun, though depressingly short little game. Wrapping up after a mere six hours, it’s over before you know it. However, being short is no excuse for the game’s lack of a manual save. The game only saves whenever a quest is completed, and a fair bit of time can sometimes pass before you complete one, making it hard to play in short bursts. Compared to other similar downloadable RPGs, the cost to content ratio is rather low, making it a hard sell for the thrifty gamer. However, the content is worth the price for anyone looking for an enjoyable Hallowe’en adventure.

Well I played it in one sitting, so that didn’t bother me!

No wonder you smell so bad.

I don’t smell! MAAAAAAAAAC! Adriaan said I smell and he’s being a jerkface to me! He’s also jealous ’cause I loved the game more than he did, and ’cause I platinum-ed the game first!

What? I was finished hours before you! Days, even! You copied me!

Nuh uh! Anyway, if Adriaan would stop interrupting me because he’s a sore loser, despite its short playtime, Costume Quest‘s charm and quirk make this game a must-play, even if it has a few minor wrinkles that could have been ironed out.

Get out of my review!