When Class of Heroes released in North America in 2009, first-person dungeon crawlers were few and far between, and they fell into one of two camps: unforgivably old school and rough around the edges, or containing a high level of polish along with newfangled 2000s design mechanics. Class of Heroes filled a gap by leaving Wizardry mechanics untouched, covering them with a toony, modern polish, and nerfing the difficulty. Skip forward four years, and first-person crawlers have experienced a noticeable resurgence in North America, ranging from niche one-offs on small budgets to major, ongoing series that continually update and tweak the gameplay in each new entry. It’s both good and slightly disappointing then that Class of Heroes 2 is largely the same game as the first, keeping most of the original’s strengths and flaws without putting forth much effort toward improvements.

Class of Heroes 2 takes place in a setting filled with schools where teenagers learn adventuring skills. No reason is given for why infinitely spawning monsters roam all unsettled regions, or why twisted labyrinths are the only means of moving between safe havens, but it stands to reason that in a world like this, teaching children how to use swords, sorcery, and tactics would be important. The player creates and controls a party of taciturn students as they run errands, aid in high school hijinks, and ultimately uncover a plot to annihilate all peaceful humanoids in the world.

The supporting NPCs who benefit from all the errands and world-saving are unfortunately a one-dimensional, uninteresting group of people. A library assistant, Olive, handles most of the quest explanations, tagging along with the party as needed so other NPCs have a sounding board who can reply to them. Although this format works fine in games with mute protagonists, Olive’s personality is as interesting and deep as a two by four, and the way she interjects herself into conversations on the party’s behalf detracts from the storylines in the game’s many quests. Even with the weak characters, there’s a surprising amount of dialogue in the game and most of it is entertaining. The best humor comes from situational events where ridiculous outcomes take the dialogue into absurd, unexpected directions. It tries for touching moments too, but they’re less successful until events sour in the final stretch. The characters become more endearing when they’re discussing the fate of the world rather than gossiping about who has a crush on whom. Despite the lack of a clear main storyline for most of the game, the dialogue is fun to read and adds to the experience enough to make up for the missed character opportunities. 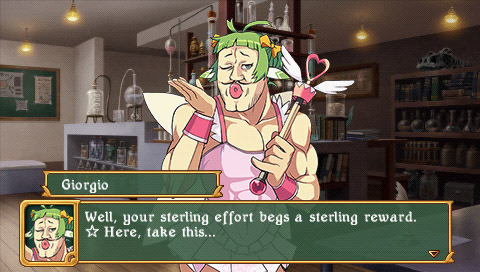 Giorgio, the flirtatious bodybuilder man-fairy fashionista, is an exception to the otherwise dull cast.

The localization is straightforward and competent if a hair inconsistent. Don’t expect obtrusive references to 2012 pop culture in this RPG just because Victor Ireland had a hand in it; the translation’s humor is on par with what other US localizers would create without elves and dwarves cracking wise about how McKayla is not impressed or telling people to Call Me Maybe. Every now and then a line will get English flair when a writer had a creative flash, such as a strong laxative being called a “demonic colonic tonic.” Other times a word or phrase will be translated incorrectly, such as a reference to the children’s game “simon-sez” instead of Simon Says.

As for the gameplay, Class of Heroes 2 sticks to the same formula as any game emulating Wizardry. Upon starting, the player creates a party of combatants, selecting race and gender, which are permanent, and class and alignment, which are not. Bonus points are rerolled by cancelling and retrying, and vary widely enough that a minute of rerolling is worth the small effort. Aside from personal preferences for fantasy races, it’s important to consult the race Affinity chart to form a party of students who like each other. The exact effect of Affinity isn’t explained, although the manual states that it is very important. In the original Class of Heroes it affected stat growth. Unfortunately, the game itself supplies no assistance in this process. The Affinity chart is only in the manual, and class restrictions are not provided anywhere. Oddly, the manual’s race descriptions offer class suggestions that aren’t possible in the game, giving character creation a trial and error component that’s too much of a waste of time to be considered fun. Not knowing which classes are available for each race can also be limiting down the road.

Once the party is set and Olive finishes her introductory babbling, the dungeon crawling can commence. Dungeons are fixed for each location, marking the only major difference between Class of Heroes and Class of Heroes 2. Gone are fast shortcuts, magic locks, and the puzzle-like nature of the original’s mazes. Instead, the sequel has theme-based dungeons with visuals and foes to match. A dungeon that’s called a path is going to be green, relatively straightforward, small, and have great visibility. Conversely, the Witch’s Woods is a dark, swampy location with low visibility populated by magical creatures, and is a massive, twisted labyrinth that’s easy to get lost in. Each dungeon has a unique style and feel, and this adds a welcome freshness to exploring the game’s two dozen or so areas. Gimmicks and traps are slowly introduced and change in cruelty based on the dungeon, not necessarily getting trickier as the game progresses. Some of the hardest dungeons to navigate are close to the beginning of the game, and it’s a welcome reprieve when the game follows a particularly nasty dungeon with a simple one. 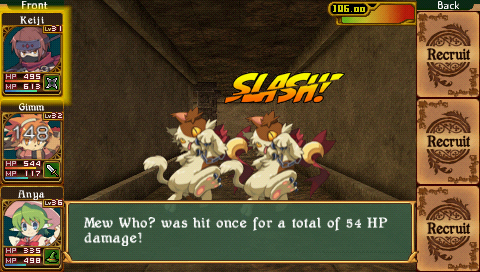 These damn kittens are an exception to the otherwise consistent difficulty balance.

As with other old school crawlers, loot is crucial to improving party members’ aptitudes in combat, and here is where Class of Heroes 2 makes its major misstep. Weapons and armor found in dungeons are usually broken and need to be repaired via alchemy to be of use. Figuring out the alchemy system is a time-consuming nuisance, and even once certain patterns are figured out it still involves a level of guesswork. Recipes can be purchased, but a glitch in the software keeps purchased recipes from appearing in the alchemy notes. Items and scrap need to be shifted between storage, the satchel, and the trash, and the whole interface for alchemy and item transferring is an awkward mess. Items dropped in the dungeon go into the trash rather than being lost, but the process for doing this requires each item to be selected individually with the cursor defaulting to the unwanted option. If half of the game’s time is spent exploring dungeons, the other half is wasted on crafting and related item management. It’s a shame because outfitting party members is enjoyable, and shelling out a lot of dough to forge an awesome weapon that can be used for dozens of hours is always a cool feeling.

Everything else about the game is unremarkable in an acceptable, positive way. Visually, it looks clean and polished and the unique tilesets in most dungeons are appreciated. There isn’t much background music, but constant sound effects of party screams, footsteps, and random monster gurgles give the presentation added depth. Quests that serve as gates for the main storyline unlock new dungeons, and this happens regularly. The pacing is steady and superior to the unbalanced moments in the original. There’s a slow portion in the middle of the game that is meant to buffer the difficulty while the player theoretically reclasses some students or creates new ones. Combat moves quickly and doesn’t offer much more complexity than fight/magic/item/defend. Students in the back row need ranged weapons to attack foes. A well-equipped party can win most battles by holding R and X to rapidly auto-attack. A poorly-equipped one will need to fight more carefully and possibly rethink their equipment. The game sports an autosave feature that saves multiples times each minute and keeps the player from needing to do so, although it inconveniently deletes the autosave file when the PSP is powered off. Warp points, teleport spells, and wyvern rides allow already explored areas to be skipped.

If the biggest flaws in Class of Heroes were a steep barrier to entry, a lack of in-game information, and an awkward item menu interface, then the biggest flaws in Class of Heroes 2 are unquestionably the same. The strengths are the same too: lots of character and equipment options and customizability, engaging and lengthy dungeon exploration, entertaining dialogue, manageable difficulty, and a battle system that tries to be too fast-paced to let combat be a burden. Due to the strong online community backing this game and Gaijinworks’ quickness to cater to them, significant information missing from the game and manual are already available online in both official and unofficial channels. This mitigates many of the drawbacks. The Class of Heroes series remains a solid, enjoyable option for gamers who want simple Wizardry dungeon and combat mechanics without the difficulty of Labyrinth of Lost Souls, The Dark Spire, and similar titles, and the sequel is an improvement, however small, over the original.