Most RPGs tend to have an over-reliance on the “Role-Playing” being determinate of a given character’s combat prowess. Abilities often find themselves focused entirely on interacting with violence, whether it be how and the amount to dish out or how to prevent or fix the effects of it. So when Call of Cthulhu presents a mystery that spends most of its time devoid of violent interactions, it carves a unique niche in the gaming environment, even if many of its other elements, while mostly competent, don’t stand out in any particular way. In fact, the closer Call of Cthulhu bends toward its violent core, the more it groans under the weight of its own limitations.

The game begins less than a decade removed from the protagonist’s tour of duty in Word War I. Edward Pierce, now a private investigator, is down on his luck, drowning in liquor to cope with his PTSD and awaiting a worthwhile case to get the bills paid. When the plot comes knocking at the door, it sends Pierce to the mysterious Darkwater Island, where a famed painter and her family have burned to death in a mansion fire. Upon arrival at the island, not everything is what it seems, and the townsfolk are as welcoming to an outsider as to a cold. As Pierce learns of the town’s history, it becomes clear that something far more nefarious is at work. 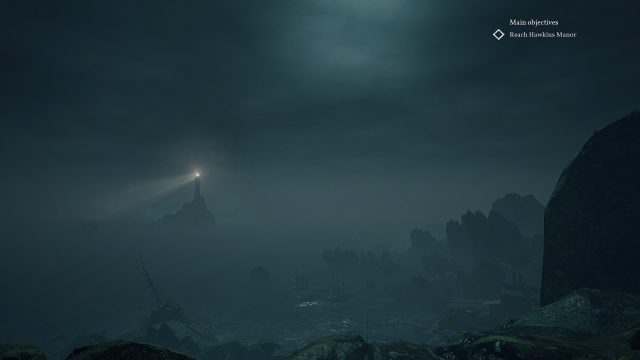 Welcome to Darkwater Island. It doesn’t really ever get more inviting.

Call of Cthulhu plays out as somewhat of a greatest hits of H.P. Lovecraft’s body of work. This allows developer Cyanide to mold its own story, but it gives the game a very familiar feel. Drunk PI? Check. Backwater island? Check. The town’s elite being a little too into the occult? Check. Does it even count as a spoiler that it turns out there is a secret cult on the island? There is little here in the game that hasn’t been seen before and as a result the story plays out in a very by-the-numbers way. Even as the game continues and Pierce’s perception of reality begins to blur with madness, it often feels like the gaps in continuity that become more frequent as the game progresses are more indicative of a patchy script, though they also successfully serve as obfuscations to the player as appropriate to the theme.

This isn’t to say that the narrative is ineffective. There’s something about traditional gumshoe story, even wrapped in a Lovecraft jacket, occupying the RPG space that’s novel. The game remains a focused experience throughout and provides a constant feeling of moving-forward. If anything, the game moves too quickly, eager to get to the tentacles and garbled cult-speak. The opening hours of the game are by far the strongest, each building a solid sense of foreboding and unease. It’s here where the game truly shines in its element: exploration and mystery. 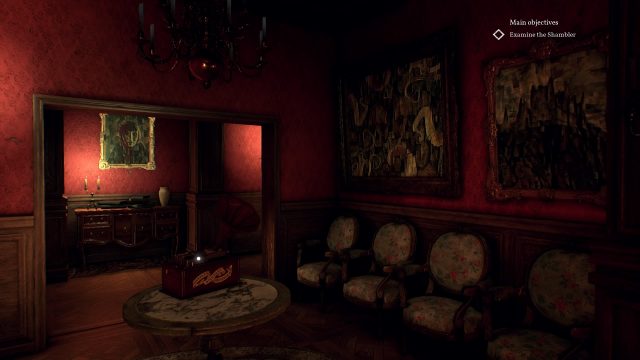 Even when dealing with forms of escapism, the characters of Call of Cthulhu turn toward the macabre.

Eschewing the popular trends of today, Call of Cthulhu features no open world or large, sprawling maps. Instead, the game is segmented by chapters, each taking place in an isolated area. But for all the ways it lacks in scope, it makes up for in detail. Much of the game is spent checking every nook and cranny for a missing clue, a hidden detail, or a puzzle to solve. This could come off as dull, but the varied environments and some effective pacing keep these parts engaging. It also helps that the game finds ways to reward the player beyond just piecing together the mystery.

That detail is also where the game’s RPG elements come into play. The skills options have been narrowed significantly from Chaosium game that inspired it, with Pierce having access to seven skills: Investigation, Eloquence, Spot Hidden, Strength, Psychology, Medicine, and Occultism. Each of these skills are ranked out of five, each threshold opening new options for interacting with the environment or granting new dialogue options. For example, certain areas will give a visual indicator that there are hidden items to find. The better Pierce’s Spot Hidden, the more of these he will find. The other skills are more straightforward, often simple checks for actions that Pierce can perform or to gain more insight into the surroundings. 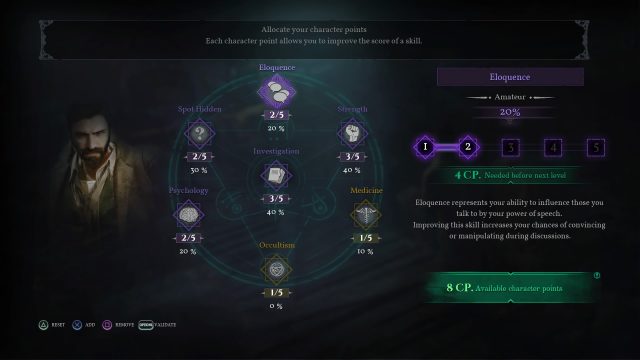 There may not be many choices when leveling up, but this makes them feel more meaningful.

The game doesn’t have experience points; instead, accomplishing major objectives will grant Character Points. Each CP put towards a skill increases that skill’s odds of success by five percent, which also increases the skill’s threshold at certain points. Medicine and Occultism work differently, as those skills must be improved by discovering items such as books in the environment, which improve the respective skills upon being used. Skills can be raised to one-hundred-percent effectiveness in this way, though a single play through does not award enough skill points to max out every skill. This actually feels right, as Pierce doesn’t come across as someone who should be able to reliably handle every given situation in a way he sees fit.

This creates interesting decisions to make during gameplay. The game plays from a first-person perspective and doesn’t have a combat system, at least not in a traditional sense. This means it has much more in common with modern horror games or adventure games with skills deciding how effectively Pierce can handle key situations. Players can build Pierce to be quite insightful, able to read people in conversations, but focusing on that allows for him to miss key pieces of evidence when exploring environments. Conversely, Pierce can be adept at finding clues, but may not have the savvy to quick talk his way out of a tricky situation, instead having to resort to less savory means or losing access to entire gameplay threads. Smartly, the game promotes failing forward, a failed check is not the end of the world and there is always a different way to advance. 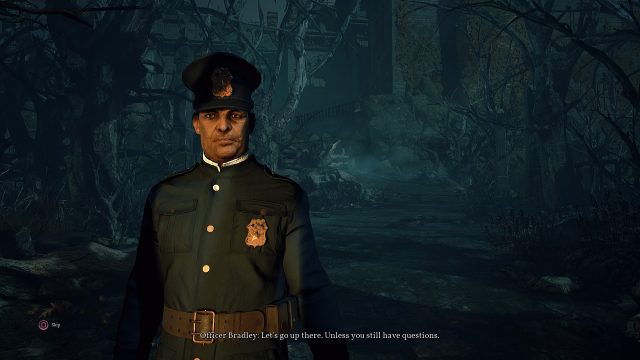 Not everyone on Darkwater is an unfathomable monster, there are some friendly faces.

This doesn’t hold true throughout the entire game, however. At several points the developers felt there needed to be scenes with more action in them. What they deliver are vapid stealth sequences that are as lacking in fun as they are in mechanical meat. The only tools for stealth offered to Pierce are the ability to crouch and the ability to lean around corners, the former being necessary while the latter is entirely worthless. Enemies, the human ones anyways, get a small indicator over their head if they’ve noticed something. But the enemy’s ability to see Pierce is so inconsistent, sometimes spotting him in foggy conditions across an entire lot, and there is nothing the player can do if caught, it simply forces a restart. These segments consist of little more than repeated annoyances while looking for a solution. Some of these segments require such a specific set of actions to progress that it feels like nothing more than trial and error. In a game where the highlights come from slowly and methodically investigating an area, the addition of enemies ends up being intrusive and annoying rather than adding to horror.

The other major drawback for Call of Cthulhu is that, for all of the changes it can bring to how the game progresses, it is unclear how any of the player’s decisions affect how the story plays out. The game makes mention that some decisions will alter Pierce’s destiny, but the outcome seems pre-determined to two inevitabilities. In addition, both of those endings feel lackluster and fail to trigger any sense of fear or dread. Having a bombastic ending isn’t a foreign idea in a Lovecraft story, but Call of Cthulhu‘s endings aren’t fun to play out. 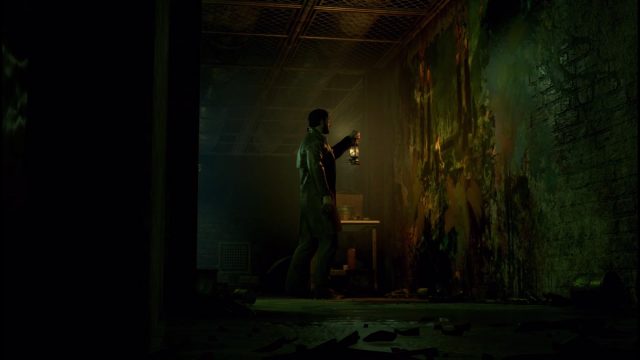 Like most things on the island, the mystery of the gunk on the wall probably doesn’t have a wholesome answer.

Some mention should be made of the game’s good use of its setting. Predictable as it may be, the island of Darkwater is a solid articulation of Lovecraftian town, complete with a creepy atmosphere and a solid art direction. There are some small things about the game worth celebrating as well: for example, an entire button dedicated to flipping out a lighter feels within Pierce’s character and is oddly soothing. Technically, the game is a little rough around the edges and the PlayStation 4 sometimes struggled to keep up. Oftentimes, spinning or rounding corners quickly reveals a split-second of empty space before things are rendered. The music is moody enough, though stays mostly in the background and doesn’t leave a lasting impression.

Lacking a lasting impression may be Call of Cthulhu‘s most glaring weakness. Outside of the stealth and action segments, none of the game is out and out bad, but a lot of it comes off as more middling than a success. For every two chapters that feel like solving a mystery, there’s a chapter where it’s difficult to understand what the game wants the player to do. With expectations kept in check, there is a unique experience to be had here, one that’s worth the frustration, even if it has the potential to leave one a little cold and empty at the end.