Borderlands 2 was fantastic when it was first released back in 2012, even winning a few awards here at RPGamer. For 2014, the PlayStation Vita now gets its rendition of this RPG/FPS hybrid. The portable version has a few technical issues to overcome, but considering the size and scope of the game and the massive amount of content, it is still a fantastic experience despite those problems.

One of the best aspects of Borderlands 2 is its story. While not an epic story, this game’s focus on crazily over-the-top humor still features a plot worth caring about. Players take the role of a vault hunter in search of fame and fortune, but before getting anywhere the main antagonist Handsome Jack tries to kill the protagonist. Left for dead, the ever-optimistic Claptrap saves the protagonist and eventually helps locate the city of Sanctuary, where the real story begins.

The vault hunter teams up with the cast from the first game, who are now fully fleshed out characters, to stop Jack from opening the vault and running wild over the world of Pandora. The entire game is very tongue-in-cheek, but it perfectly accomplishes this. The game is overflowing with humorous dialogue. Whether talking with people directly or hearing from them over the radio, there’s almost always something funny going on. The missions are just as crazy, as only in Borderlands will one find missions to willingly shoot someone in the face, collect dirty magazines, or retrieve clothes and body parts for a malfunctioning robot. Despite the crazy cast of characters, the humor is often very subtle or dark instead of being silly or slapstick. Borderlands 2 even has a few moments that act like a punch to the gut and bring a bit of emotion to the humorous setting. 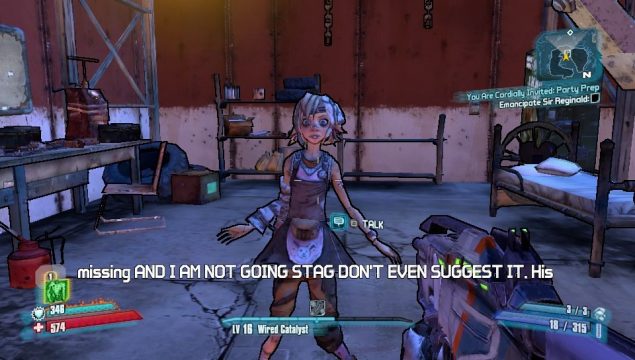 Despite being a first-person shooter with sights to aim down in real-time, grenades to toss, and bullets to dodge, Borderlands 2 is also very much an RPG. The game has a major focus on loot-gathering, and unlike other looters, all the game’s areas are unique and well-designed, not randomly generated. The randomness comes from weapon and armor drops, and a lot of variety will be seen. Not only are there different types of guns, but the manufacturers of those firearms make a difference in how they handle, along with affecting accuracy and rate of fire. Some weapons have elemental affinities, which will hit enemies with different status effects such as corrosion which is useful against armored foes or fire which deals damage over time to fleshy enemies.

Each type of weapon has a max amount of ammo that can be stored, though this can be upgraded through the black market via the game’s rare currency, Eridium. Backpack capacity can also be upgraded this way, which is helpful because inventory is very limited when compared to the amount of loot to be found. Even still, players will spend much of their time selling back trash equipment to the vending machines that serve as vendors in the game. This is only really a problem during lengthy areas where vending machines are scarce, but that’s often in areas where the best loot comes from.

The game’s transportation system helps alleviate some of the back and forth that’s required in Borderlands 2, as players can easily jump between areas after discovering a fast travel station. It’s not perfect, because these stations are not always conveniently located, but it’s better than the alternative. The more dungeon-like areas are typically long and twisting, but pretty creative in their design. An easily accessed map allows the current location and the next destination to be conveniently seen, but some areas are still hard to navigate due to their layered environments. In the larger, open areas, players can walk around or pick up vehicles for free at Catch-A-Ride stations. Driving takes a while to adapt to, because steering just doesn’t feel natural at first, but after a while most should adjust.

As for character building, the game offers six different classes: Commando, Assassin, Gunzerker, Siren, Mechromancer, and Psycho. All characters can use any weapon, so what sets them apart is their special skills. For example, the Mechromancer Gaige can summon a robot to fight in her place, while the Commando Axton can drop a turret to shoot things up. Each class has three different skill trees to pick between, making characters highly customizable. There is a respec option in case the route taken doesn’t quite work out, though it’s pretty hard to take a wrong turn in character building. It’s a versatile system that is easy to fit into almost any play style. 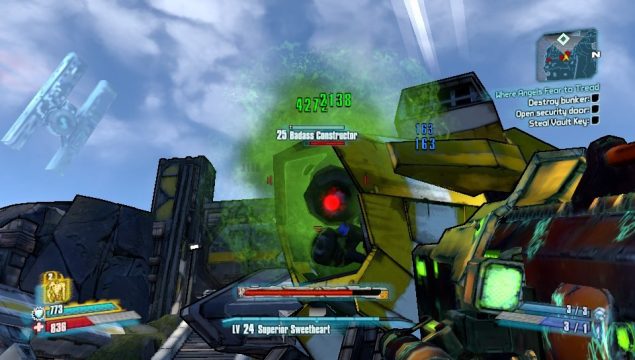 To allow for a more social experience, Borderlands 2 allows players to team up for co-op play. On Vita, only two can play together, but it’s still very helpful to be able to have a partner around for assistance. This is especially handy in case of death, because a co-op partner can reach the body and attempt to bring it back to life. Death tosses the player back to the most recent New-U Station minus 7% of the current funds, but with all the currently held loot, so it’s hardly a disaster. These New-U Stations also play into the game’s humor with some of the most hilarious automated messages to be found, which makes dying less of a downer.

Borderlands 2 is a beautiful game, with a brightly colored, stylish world featuring areas such as a frozen wasteland, charred canyons, and a wild west town. The art direction is diverse and fits the game’s playful tone quite well. On Vita, the game’s frame rate does suffer a bit, but it’s not bad enough to be a major hindrance. The music in Borderlands 2 is subtle, but well-suited to the world and setting. The voice actors are outstanding, especially Handsome Jack’s. His actor does a magnificent job of delivering the lines in such a way that makes Jack seem like the despicable human being he is, but still fascinating to hear from every time. The presentation of this game is scaled back a bit from the console releases, but is still mostly fantastic in this format.

The Vita is a perfect fit for Borderlands 2. It offers all of the content from the original release along with a few DLC packs. Being able to cross save between Vita and PS3 is another great feature. This title offers well over forty hours for a single playthrough with a new, more challenging mode accessible after finishing the main story. One unfortunate downside is that this version crashes way too often. There are still new patches being released, but currently the game is very unstable having crashed at least fifteen times during my play session. Despite that, being able to hop on and briefly complete a quest or two by jumping in and out of sleep mode is great and helps to outweigh the technical issues. Borderlands 2 is a great game to play in bursts, and the handheld format lends itself to this type of game perfectly.