Reaches for the Sky

If video games had appeared on the scene earlier in the twentieth century, the odds are good that more of them would have a Western setting, considering that one in three of all movies made in the US before 1970 was a Western. Seeing references to the Old West is fairly common, but full-on Westerns are rarely seen in the video game realm, making Boot Hill Heroes Part 1 a fascinating critter to behold. The people at Experimental Gamer did their best to make the game walk the walk along with talking the talk, and got enough things right along the way to make this an easy recommendation for anyone intrigued by its setting. Boot Hill Heroes is no cookie-cutter title rolled out from an indie RPG kitchen, and it’s worth investigating.

A decade before the main action the sheriff of Swellsville, Templeton Howl, succeeded in capturing Coyote Howl, leader of the Saints-Little gang terrorizing Bronco County. Templeton lost his life in doing so, but the gang vanished from public view and Coyote was sent to Devil’s Hold prison. Nowadays Templeton’s widow and son are in need of funds, forcing her to send Kid out to work as a stable boy for income to help prevent the bank seizing their property. The neighboring town of Ashwood was burned to the ground by what appeared to be the local Chepakwik nation, and feelings are tense because of it. Soon enough Kid finds himself chasing a man named Monty Spaids who stole his pay with a card swindle. Kid’s pursuit of this man brings him into contact with some allies, and also paints a rather different portrait of Ashwood’s arson than seemed to be the case.

Boot Hill Heroes travels a path seldom seen in the RPG world, and is the better for it. It takes the Western setting seriously, and while goofiness is plentiful, all of it fits into the environs pretty well. For being Part 1, it manages to cram a large amount of content in, and the cliffhanger ending serves its purpose of making players eager to see what will happen next. Wandering through a desert and participating in a gunslinger duel might be expected from the setting, but leaping between logs on a river and fighting off rogue acts in a circus show the effort made to keep things constantly moving.

The text helps a great deal here by carpeting dialogue with Western slang. The script makes a sincere effort to feel like it’s taking place in the late nineteenth century, and while the result wouldn’t fool people from the actual setting, it does a good job of achieving distinction. A certain number of typos that slipped through the process are aggravating but not large enough in number to ruin the reading experience, though their presence at all seems to indicate an extra proofreader would have been useful. 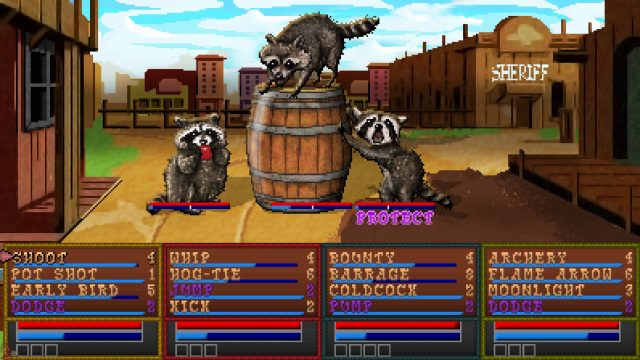 Raccoons are nasty varmints, and you just HAD to pick a fight with them over this beautiful barrel of slop. Be prepared.

In its approach to combat, Boot Hill Heroes continues to use unusual text descriptions that enliven the proceedings. Unruly whippersnappers and pompous squawkers are among the opponents that will get in the way, and rather like Earthbound, they never simply attack. Adversaries are also never baldly defeated according to the text, and the variety of language used in battle is an effective way of keeping the proceedings memorable.

Encounters themselves are an interesting variant of the ATB system, and are unique in several aspects. Participants on both sides have a blue meter that rises from zero to ten with time, and each technique requires a certain number of points to pull off. Several time-dependent abilities are available for both sides that make playing defensively the right choice, as some enemies like to deploy counterattack or evasive stances that will frustrate a continuous offense. Keeping an eye on what the enemies are about to do while taking character actions leads to a great deal of frantic action, and each new foe is an interesting opponent. Regular fights are set at a manageable difficulty level most of the time, and simply walking around for a time will gradually replenish HP, but some of the bosses will make paying close attention at every moment essential for victory. A simple retry option is available if the player is defeated however, preventing some late villains from being too frustrating.

Each character on the player’s side can simultaneously equip four techniques for use in battle, which the game calls Vantages. The characters will learn considerably more than four, but since many of them are exclusive to certain weapons the limitation isn’t prohibitively restrictive. Vantages are learned in the first place by equipping various hats that are gained as the game progresses and keeping them on during fights, which is an interesting way of soliciting fashion consciousness since the headgear makes an instant visual difference.

Enemies are visible before fighting, and in another Earthbound similarity they often are found hanging around urban settings instead of the world clearly having safe and dangerous zones. Foes drop things that can be sold, but never drop any money. Items for resale are found randomly scattered around the landscape, so gathering a heap of assets for a trip to the store isn’t difficult, but requires a little more thought than many games. 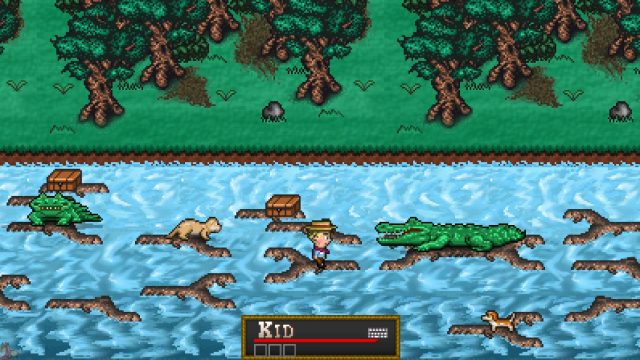 One annoyance stems from Kid’s unhurried saunter of a speed while walking. He gains a horse that can gallop before too long passes, but it’s impossible to talk to NPCs or pick up goodies lying around from horseback. Putting the horse away is done with the simple push of a button though, and interaction as a whole is quick and effective. Finding the correct path when the way forward is quite narrow can involve some bother, but overall Experimental Gamer did a fine job with navigation.

Boot Hill Heroes seems inspired by Earthbound in a lot of its visuals, except with a distinctively Western landscape. The variety of sprites for characters in the game is extremely high, each building looks distinctive, and the enemies are a wide-ranging bunch that changes with each new area. The protagonists get relatively few animations considering how much detail was applied to the less-important places and things with which they interact, but that might be improved in Part 2.

The musical compositions are not uniformly catchy, but are never unpleasant. The highlights are quite effective, and everything sounds as it should for the setting, with a few appropriate Ennio Morricone references being made. Sound effects also deserve credit for effectively presenting the setting, with one villain’s nefarious laugh receiving particular notice for its fitting complement to his character design.

Boot Hill Heroes Part 1 packs a lot of content into its package. RPGs set in a Western milieu are thin on the ground, but this one would warrant investigation even if the list was longer. Experimental Games deserves a lot of credit for imaginatively thinking through this game, and I eagerly await Part 2 coming out after the great time I had in about eight packed hours with Part 1.