Perhaps I May Yet Die with My Boots On

Experimental Gamer Studios’ Boot Hill Heroes arrived on PC back in 2013, bringing a well-regarded Western styling to a retro-themed RPG. The first in a planned trilogy, much has happened in the development of part two — including a complete rebuild of the game’s engine — but the end of 2017 has finally seen the arrival of Boot Hill Bounties. Though there isn’t too much that really stands out on its own, it all fits together nicely and uses the Wild West theme well to create a highly enjoyable romp through Bronco County.

Though it takes place shortly after Boot Hill Heroes, newcomers do not need to have played the previous game before jumping in. Boot Hill Bounties does a nice job introducing the four party members and noting their adventures in the previous game as well as setting up their current predicament for newcomers. After its earlier adventures, the new Boot Hill Posse — made up of the firebrand Rosy, the vengeful Doc, the native tribe member Moon, and the point-of-view character known simply as Kid — set out to collect the bounties of the Saints-Little Gang, all of whom have wronged the party in very significant ways.

Following the linear early stages, the game splits into four distinct chapters that can be taken on in any order. Each focuses on following a clue to one or two particular members of the gang, and all but one has the story focusing on one of the party members. The separate stories all work as engaging individual tales, giving the specific members of the Saints-Little Gang plenty of characterisation to tie into their actions and motives in the process. One complaint to be made about the story is that there isn’t a fully satisfying ending to its overall premise of war breaking out between the settlers and the native tribe. Instead there is a post-credits cliffhanger to the next part of the tale, though this should be expected given the game is only part two of a trilogy. 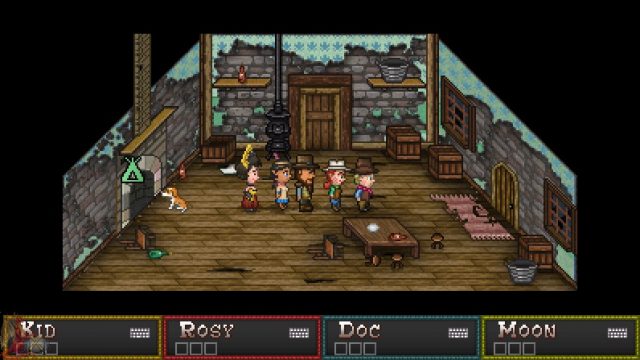 Combat uses an active time-style system, with combatants given action points at a steady rate. These points are used by various skills, called vantages, which are equipped and provided based on which hat the party member is wearing. Most hats start out with four vantage slots and a limited range of options, though two extra slots and more choices can be unlocked as the hat levels up through the experience provided after every battle. Each hat provides a different set of skills/battlechef/screens/battlechef, and the level system encourages players to try and see what vantages each hat can offer.

If an ally is rendered unconscious, he or she will automatically revive after a time. Some skills can revive immediately, but the time a character is down for extends with each subsequent knockdown, and they will also be inflicted with a wound that affects their battle performance in some way; for example, bleeding will cause a steady health drop. Other status effects also play important roles, and inflicting these or other hindrances, such as knocking off action points, can be key to victory against those foes that can hit particularly hard. Wounds can only be cleared by visiting a physician, camping, or using a med-kit, and the game adds some additional depth to its combat system through equipment loadouts, as well as through weapon enhancing and cooking, done by using items collected from around the country including Kid’s own expandable home farm.

There is an adjustable difficulty, which can be changed freely in the menu, though even on easy the bosses will cause serious problems to those not properly prepared. The main problem usually comes in enemies that have an instant kill ability. The ways of stopping them are very limited without crippling the party in another way, so players may end up simply resorting to a tactic that has worked rather than being encouraged to try out different hats. 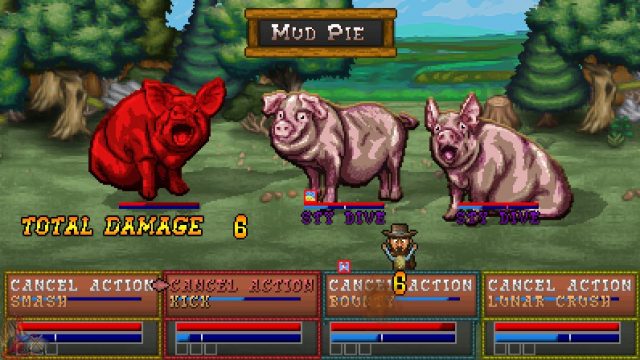 Enemies range from the fearsome to the mildly annoyed pig.

Outside of following the story, which will take most between fifteen to twenty hours, there are a lot of challenges, quests, and puzzles for completionists. It’s appreciable how much Experimental Gamer has hidden away for those who like to try and do everything the game has to offer, even if it requires players to take notes and stay organized in order to find it all. There is certainly a lot less handholding than many more recent RPGs, which is both a blessing and a curse. There is a good sense of achievement when working out a puzzle, but some, like the puzzle-battles in the mine section that don’t really fit in well with the combat system, can become annoyances. There are also some small quality of life irritations, such as the autosave option occasionally not picking the optimal time to activate, and retry not allowing access to the game settings menu for those who might want to reduce difficulty for a specific fight, but these can be overlooked.

Though limited technically by its 2D sprite graphics, Boot Hill Bounties utilises the Wild West aethestic rather nicely, adding plenty of cool touches, such as character sprites and portraits changing to reflect their current hat. There is a good amount of variation in enemies, with no random encounters — each one has been actively designed — though animation during combat is minimal and what is there doesn’t add very much. Jake Kaufman’s soundtrack helps the game stand out. There is no voice acting, but a great selection of themes that are a pleasure to hear more than compensates for this. The music effectively matches up with the Wild West theme, providing a much needed sense of excitement to the combat and hepling to distinguish the various locations.

It’s been a fairly long wait for Boot Hill Bounties, but Experimental Gamer Studios has certainly done enough to resurrect interest in the Wild West RPG trilogy. The game marks a strong second title, and new players shouldn’t be afraid of jumping straight in here — though checking out the previous title certainly wouldn’t hurt. Signs are good that the developer will be able to make a fitting conclusion to the trilogy.