Take Me Down to the Paradise City

In the last console generation, From Software rose to prominence based off of the success of a few games. These games, specifically Demon’s Souls and Dark Souls, gained notoriety for their harsh fail states and the rather cryptic means by which they convey their mechanics and narrative, favoring a hands-off approach to player progression and giving the game a true sense of discovery. With Bloodborne, the developer’s first game in this current generation of consoles, From returns to this well again but in a refreshing turn that’s even darker than the previous games and a relatively streamlined experience. Bloodborne doesn’t mark a revolutionary turn for the series, but it is a great game in its own right.

Bloodborne takes place in Yharnam, a sprawling, Victorian city beset by marauding beasts. Players take control of a hunter, one who deals with the beasts. Tonight in particular is the night of the hunt, where the populace takes shelter in their homes while the hunters do their work. At the beginning of the game, the Hunter has been infected with a disease that will eventually turn him or her into a beast. The hunt is literally on as players delve into the city to both uncover the secrets of the plague of beasts and to purge the city of them.

Despite being a game in a similar vein to Demon’s and Dark Souls, the differences are numerous enough to be noticeable straight from the beginning. Character creation is similar to the previous games, but instead of picking a class, players choose an origin that represents their life before arriving at the city. These origins do not set the player’s playstyle in stone; they merely act as starting packages. 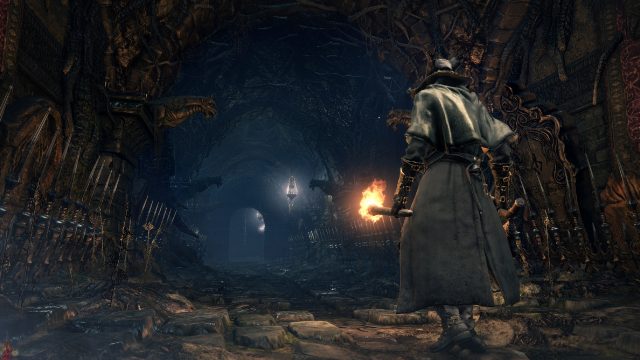 Bloodborne’s environments are dense and detailed.

It’s here where the game can find its first controversial change: the streamlining of RPG elements. Character building is still as open-ended as it has always been in these games, but now the total number of stats has been decreased to six. Vitality and endurance govern health and stamina respectively while the remaining four stats — strength, skill, bloodtinge, and arcane — correlate to specific types of damage. The reduction of the number of stats ends up working in the game’s favor, as there are fewer, if any, dump stats that could harm a build if alloted incorrectly, but the number of unique builds will drop significantly as a result. This also has the added effect of making strength-based weapons dominant in the early game, especially when compared to arcane, which doesn’t begin receiving weapons until the latter half of the game. This effect is mitigated in subsequent playthroughs, which the game expects as there is content locked until New Game+, but some players looking to play through their way on the maiden voyage will be in for a rough trip.

Combat promotes aggression, trading shields for firearms and speeding up the gameplay marginally. Knowledge of attack patterns and vigilant stamina management keep the player busy during fights. Every attack and dodge uses up different amounts of the stamina bar and when empty leaves the player only with the ability to move normally until the bar refills over time. Guns are held in the offhand and an appropriately timed shot can stagger an enemy, leaving it open to a devastating visceral attack. Where Bloodborne truly separates itself from its predecessors is in the weapons available. The number of weapons has dropped and they are no longer commonly found as loot from downed enemies. Rather, many of the weapons are able to transform, even mid-combo, containing both a one-handed form and a two-handed form. These weapons have a basic attack, a chargeable heavy attack, a dash attack, and a transformation attack for both the one-handed form and the two-handed form. This effectively doubles the number of available attacks for every given weapon and offers a wealth of offensive options to accommodate the game’s aggressive focus. Decreasing the number of weapons makes each of them more unique, all while preventing the cluttering of the inventory with duplicate, inferior weapons. 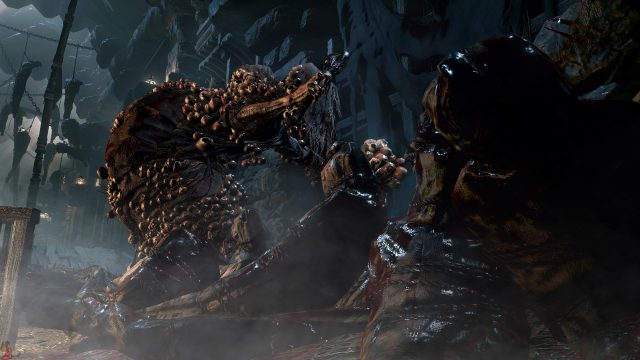 Monsters are a dime-a-dozen in Yharnam.

As the number of weapons decreases, upgrading has also become less complex. All base weapons follow the same path to maxing their levels. To customize weapons, special runes called blood gems are inserted into the weapon to give it special properties. Most of these tend to provide flat bonuses to damage or stamina, but some end up providing certain kinds of elemental damage or changing specific attacks in a combo. Weapons can initially only hold one blood gem, but this number increases as the weapon levels up. A different kind of rune, called Caryll Runes, are equipped by the character and offer passive benefits. The hunter can equip up to four runes: three generic ones and one tied to a covenant. Covenants are another aspect of the game that reappear while simultaneously being slimmed from previous titles. For starters, the number of them has been decreased from nine to three, but as a result they are a lot harder to stumble into. All of them are heavily focused on multiplayer, so they offer very little in the way of solo content except to meet the respective leaders.

Multiplayer again may turn out to be where much of the longevity of the title will rest, but like the previous games issues hinder the experience somewhat. Other hunters can be summoned using a Beckoning Bell, can join a game using the Small Resonant Bell, or can invade using a Sinister Resonant Bell. For the first time in the series, a password can be set on joining or summoning that can allow friends to play together hassle free. Cooperative play has the tendancy to make a lot of the game laughably easy, but may be what is needed to get past a difficult part. Invasions are still connection dependant, ranging from smooth to laggy. For better or for worse, multiplayer is a mainstay of the series but Bloodborne does very little new to separate itself.

Chalice Dungeons are much more likely to fill the role of longevity this time around. These bonus areas comprise the ancient labyrinth beneath Yharnam. Randomly generated to an extent, the dungeons serve as a sort of full spectrum of game’s experiences, featuring unique loot, monsters, and boss fights. Hunters must gather the appropriate materials to perform a ritual to generate a dungeon, but once the process has been done the dungeon is saved and can even be shared online. Different rituals generate different kinds of dungeons with different obstacles and treasures. Initially feeling like a tacked-on mode to offer an “infinite” amount of explorable locations, it should be noted that the dungeons tie in quite well with the narrative and actually add quite a bit of flavor.

The series’ notorious difficulty — which is often overblown — returns for Bloodborne. For the fourth iteration of the formula from the same company, it feels safe to say that the game is less difficult as it is punishing. Dying once again brings the hunter to the last checkpoint and respawns every enemy. Boss fights are as memorable as ever but rather erratic in difficulty, even while the rest of the game manages to maintain a smooth pace. There is a certain amount of frustration that can come with some of the game’s more demanding moments, but those are made up entirely by the moment of triumph that comes with overcoming said challenge. That being said, players looking for a more relaxing experience may do better to miss out on this one. 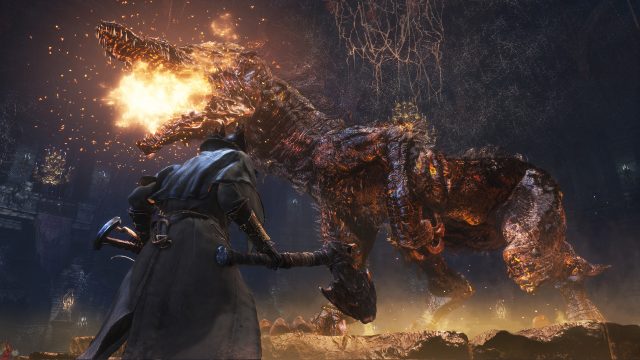 But what a game to miss out on. What it lacks in technical might, Bloodborne makes up for it in style and substance. In this way the game is much closer to Demon’s Souls, with an almost oppressive atmosphere of dread permeating the setting. Yharnam is dark and foreboding, with labyrinthine city streets leading to Victorian cathedrals, haunted forests, and to literal nightmares and dreamscapes, making Bloodborne a horror game as much as it is an RPG. The Souls games never shied away from more disturbing material, but Bloodborne embraces these aspects, combining the dark fantasy custom to the series with equal parts Lovecraft and the fear of death, the unease of birth, and the perpetual nightmare of cosmological insignificance. Not that the game will spell any of this out, rather letting the player discover these things for themselves. The single greatest pleasure the game provides is discovering somewhere new. With no map to speak of, each discovery feels earned and significant.

The biggest problems for Bloodborne come from the lack of aforementioned technical might. Load times have been patched since launch, replacing the upwards of forty second load times with ones half as long. This still doesn’t address the problem that fast travel to specific locations or levelling up can only be done from the main hub, requiring two instances of loading. Minor framerate and graphical hiccups are not uncommon or unnoticeable, though none affected gameplay. Bloodborne also drops the brilliantly designed Estus Flasks of Dark Souls in favor of healing items that drop off of enemies, which can halt the game when the need to grind for them arises. This is mitigated somewhat by extra stock of consumables being sent straight to the stash. Upon dying, vials and ammunition will be filled to their max using excess from the stash.

Ultimately, these are mostly minor failings leaving Bloodborne among the best reasons to own a PlayStation 4. While not a game for everyone, Bloodborne manages to successfully shift the series into new territory while keping alive the spirit that defines it, making it a unique addition to an already unique series of games. It’s not likely to convert those put off by the Souls games, but veterans are in for a treat and newcomers can hop into a mechanically simpler experience yet an equally rewarding one. Bloodborne is complete, distinct, and excellent.