Succeeds Despite Missing Its Target

Blade & Bones is an indie game that takes on the ambitious task of creating a combat system with the precision and weight of Dark Souls. Rather than relying on meatier RPG elements for character progression, the developers opt for a Zeldaesque progression style, and throw in a Metroidvania-inspired exploration style for good measure. Though the combat flatly fails, the game nevertheless manages to wildly succeed on a number of other fronts and makes for a very enjoyable experience.

As one of the last surviving Orin, a race cursed and forsaken by their creator Niro, the player is thrust into a mystical world with a quest to gather seven legendary swords and little else. The game is open-ended, and players can choose to explore any of the five different areas to discover cleverly-hidden treasures, uncover boss lairs, and work out the rules of how this strange world operates. The developers make great use of Metroidvania design to set up the progression in Blade & Bones. Every inch of it is jam-packed with points of interest leading to power-ups, weapons, or progress in the main quest. Exploration is aided by smartly designed relics and power-ups that reveal hidden paths and remove barriers blocking the player. Often locations contain implicit puzzles and strange mechanisms whose functions and use need to be worked out. The design leads players to visit each game area multiple times exploring different sections, going down new paths, and unveiling new secrets. The combination of these factors rewards players with an immensely satisfying feeling of pure discovery.

The story in Blade & Bones is — like its Dark Souls inspiration — purposely vague, and effectively creates an air of mystery about the world’s history. Lore and history are progressively revealed via discovered writings carved in stones and ruins. This presentation style strongly enhances the sense of discovery and allows players to supplement the otherwise weak story with their own imaginations. This combination inspires a deep sense of wonder that persists for most of the game. Unfortunately this feeling is dispelled by the end due to both a lack of sufficient background lore and revealing an overabundance of story details that unravel much of the mystery set up early on.

The graphics, while simple, achieve a wonderful aesthetic. The environments are lush, vivid, and saturated with color. The unique mix of both cartoony and realistic design works well to portray scenes that feel visually magical and engaging. Each of the five game areas comprise unique environments, from deserts, to frozen wastelands, to lush forests, but come together as part of one cohesive universe. The sparsely populated landscapes evoke feelings of beautiful and oppressive desolation akin to those in games like Shadow of the Colossus, and Blade & Bones proves that environments need not be dark, gritty, or barren to successfully evoke these feelings. A handful of NPC and boss characters are the only notable sore spots in the otherwise excellent graphics, sometimes lacking detail in comparison to the environments.

The musical score is enjoyable and features a healthy mix of both ambient background and more conspicuous tracks. The ambient tracks complement the lush but uninhabited atmosphere while music during bosses and other events can range from elegant piano tracks to ominous epic battle tracks. Sound effects are crisp and some, like clashing swords and high jumping, are even satisfying. Unlike the musical score, voice acting in Blade & Bones is a mixed bag. The handful of different voice actors offer a very wide range in quality. Certain lore, depicted on circular symbols, is narrated by a highly talented voice actor who can make even bland writing sound captivating. On the other end of the spectrum, lore discovered by other means such as during the tutorial is narrated by amateurish and awkward voice actors, and pronunciations of a variety of proper nouns is inconsistent between the two. This problem is further exacerbated by the clumsy writing and poor localization. Voice acting for game NPCs falls somewhere between this range, generally passable but not particularly good. 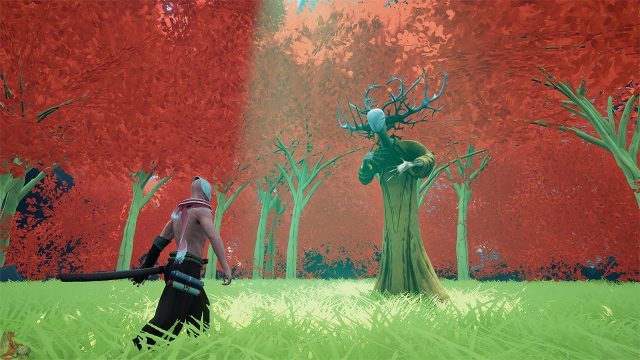 Although Blade & Bones is a self-proclaimed combat-driven game inspired by Dark Souls, it spectacularly fails in this department. It heavily borrows an effective core of mechanics from Dark Souls, including its targeting system, the stamina system, healing flasks, heavy punishments for mistakes, and the reliance on dodging to mitigate damage. Though katana swords are the only weapon types, it features several fighting styles that differ in speed, range, and damage of attacks. The idea behind this formula is solid and successfully replicates many of the aspects that make its inspiration fun. Unfortunately the controls are cumbersome and clunky. Most attacks, even those considered fast, suffer from lengthy starting and ending animations, rendering the player unable to move and vulnerable to enemy attacks. With the exception of one style, most attacks also lack sufficient range. The dodge mechanic has no invulnerability frames and is similarly unresponsive, immobilizing players for over a second after dodging backward. The poor controls combined with the punishing style of Dark Souls lead to a frustrating experience.

In addition to unresponsive controls, combat suffers from a number of poor design concepts. Weapons in Blade & Bones come in three tiers: Common, Rare, and Legendary. Common weapons can be found by killing enemies, while higher tier weapons can be found hidden around the world and as the story progresses. Although there are numerous weapons, effectively they are copies of the same three weapons and hardly differ within each tier. Weapons also have a durability statistic and can break. The only reason for this mechanic seems to be to give the many redundant weapons a purpose. It comes off as forced and feels like an annoyance. Common enemies also have an absolutely massive pool of hit-points, especially as players venture into higher level areas, making fights overly long and virtually guaranteeing that weapons will break every couple of battles. Finally, rather than experience, the main character progresses through finding fruit that increase health and bottles that increase stamina, so taking the time to kill enemies yields no rewards of any kind. Overall the clunky controls, poorly designed weapon system, and excessively large hit-point pools make battles with common enemies tedious and frustrating. Thankfully, common enemies are sparse and can be trivially avoided.

There is one redeeming aspect to combat and that is in the design of boss fights. While common enemies are poorly balanced, bosses are well-tuned to the player’s capabilities and designed to accommodate the stiff controls. And although boss battles aren’t quite as polished as Dark Souls, they are interesting and fun in their own right. Many strategies can be employed to defeat bosses, allowing for some creativity. The weapon durability system also works surprisingly well with bosses. Weapons will typically break about half-way through the battle forcing players to use a basic bamboo sword for the remainder of the fight. This progressively increases fight difficulty as the boss gets closer to death. The developers fortuitously dodge a bullet with the combat system, as its worst parts are entirely optional and the required parts are actually quite fun. 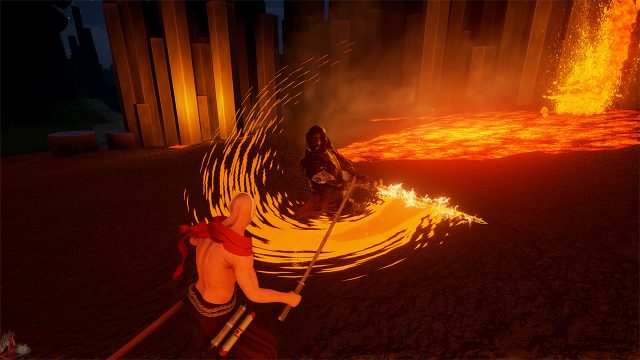 What you see: Successful backward dodge of an attack. What you don’t see: Now you can’t move for over 1s and will surely be hit by other attacks.

The game also features an interesting and controversial take for a death penalty. Because players do not gain experience or any other analogue to ‘souls’, upon death players instead drop one of nine ‘purities’ which then spawn in random locations throughout the world. These purities must then be found and recovered, and certain relics can aid in this task. This is a surprisingly fun process and encourages exploration. However, since purities don’t have any gameplay functionality, the developers implement perma-death as a sloppy motivator to get players to collect lost purities. Although avoiding perma-death is trivially easy, this punishment feels both artificial and overly harsh, acting as a blemish on an otherwise interesting death mechanic.

The developers of Blade & Bones intended their game as an entry in the style pioneered by Demon’s Souls and perfected by its successors. Although its combat system clearly misses that mark, the game still manages to greatly succeed on other fronts including its Metroidvania design, wondrous world, open-ended exploration, cleverly hidden and densely packed secrets, and magical environment visuals. Players looking for robust, weighty battles with responsive and fluid controls will not find that here, but those craving a beautiful game that entices exploration of every nook and cranny and knows how to reward players with meaningful treasures and discoveries are in for a truly satisfying experience — so long as they remember to avoid the dreadful combat.