As simple as this formula sounds, it actually works most of the time for Baldur’s Gate: Dark Alliance II. Some players feared a decline in quality from predecessor Baldur’s Gate: Dark Alliance when Black Isle Studios took over developing duties from Snowblind for the sequel. Luckily (or unluckily, depending on how you look at it), Black Isle seems to have followed the formula pretty closely, as Dark Alliance II plays almost identically to its predeccessor in most respects.

The cliffhanger ending of the first Dark Alliance made it pretty obvious that a sequel was imminent. The three heroes foiled the evil plot of the super villain Eldrith and destroyed her Onyx Tower, but in the process they were transported to an unknown world and quickly confronted by unfriendly natives. The story ended there, and Dark Alliance II picks up with a new host of heroes, five of them this time (plus 2 unlockable ones), on a mission to restore order to the city of Baldur’s Gate. The city is once again in need of heroes, as new forces threaten its walls and a new villain plots to revive the Onyx Tower. The player can choose between five characters, each with intriguing back stories. There’s Allessia Faithhammer, a warrior cleric of Helm on a mission to protect the innocents of Baldur’s Gate. Borador “Goldhand”, a dwarven rogue and treasure-hunter who excels at crossbows and using explosives, is on a quest to quench his thirst for gold. The berserker Dorn Redbear, an expert in melee combat, is a barbarian adventuring for sheer thrills and glory. Vhaidra Uoswiir, a Drow Elf of Menzoberranzan, is a monk trained in unarmed combat who adventures to perfect her combat skills so that she may return to her city and take revenge on the coalition who drove out her family. Finally, Ysuran Auondril is a necromancer with a mysterious past trained in the dark art of death magic. All five characters are drastically different in terms of gameplay, which adds a lot of replay value to Dark Alliance II. 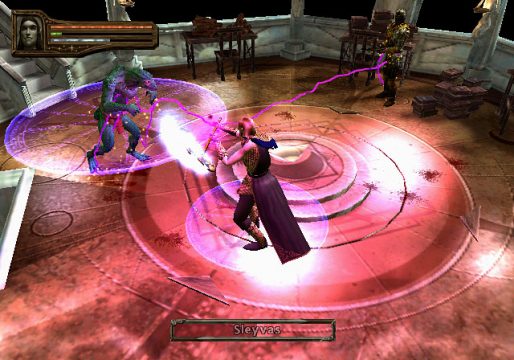 The story is nothing special, offering just enough development to open up a new quest every now and then. What really drives the game along is the joy of combat. The hero (or heroes in co-op mode) is sent on various missions throughout the game, which generally involve smashing up some skeletons, stabbing naughty humans, or destroying other various monsters. The gameplay will be drastically different depending on which character the player chooses. As the barbarian, for example, charging into combat without a second thought is generally the best (and only) alternative. As the necromancer or the rogue, however, the player will have to put a little more thought into how they are going to gain an advantage over a large group of enemies. In Dark Alliance II, characters can now equip three weapons simultaneously (one-handed melee, two-handed melee, and long-range) and switch between them with the tap of a button. The addition of one button assigned as a “shift” key also makes it easier to cast multiple spells in quick succession without having to sift through a long list of spells and abilities. Experience is gained for defeating enemies or completing various tasks, and at level up a character gains skill points equal to their level that can be spent on various feats, which are more numerous than in the first Dark Alliance title. These feats range from passive abilities such as Combat Reflexes that speed up attacks and Two-Weapon Fighting which enables certain characters to equip two weapons simultaneously, to active feats such as the necromancer’s Animate Dead and the rogue’s Smokepowder Bomb. Each character has a wide array of skills available which makes combat slightly less repetitive, as there are a number of ways to take out a given monster. Battles are extremely fun at first, especially when trying out new skills, but as the player acquires most of a character’s feats the novelty fades and battles become, for the most part, a grind. This is not helped by the fact that the game becomes extremely easy early on, at least in normal mode. Luckily, there is a Hard Mode and Extreme Mode, the latter of which is only available after the game is completed once.

The addition of a workshop is a nice added feature to this installment of the Dark Alliance series. Equipment now has a quality associated with it, ranging from “shoddy” to “flawless”. If a piece of equipment is of “fine” or better quality, it can be upgraded by adding rune stones and gems. There are 13 different gems in total, each with specific properties and associated bonuses that they can add to a piece of equipment. For example, diamonds are associated with purity and goodness while jacinth are associated with fire. Thus, if one were to add a diamond and a jacinth to a fine crossbow, along with a runestone which is required for each such transmutation, a “Fine Crossbow of Holy Flame +1” will be created, with +1-6 fire damage and a 15% chance to disintegrate undead. This is just one example, as there is a huge slew of weapons, armor, and accessories that can be created in the workshop. This new system is a lot of fun, and a welcomed addition to the Dark Alliance series. The only complaint would be that gems and upgradeable equipment take a while to acquire early on in the game, so by the time a player has the ability to create a really great new weapon, the game has already become too easy to make it necessary, especially in normal mode.

Neither the graphics, nor the music and sound effects, have undergone any drastic improvements since the first Dark Alliance. Spell effects are a little flashier, but nothing spectacular. The water effects that were hailed as wonderful in the first game now seem more like viscous jello. The lighting is still very well-executed, with particularly impressive shadow effects. Music and sound effects don’t stand out as being anything special either, but they do get the job done. The voice acting, as in the first Dark Alliance, is better than in most games. Characters will also occasionally shout out some amusing battle cries, such as “Down with you!” and “Bow before me!” 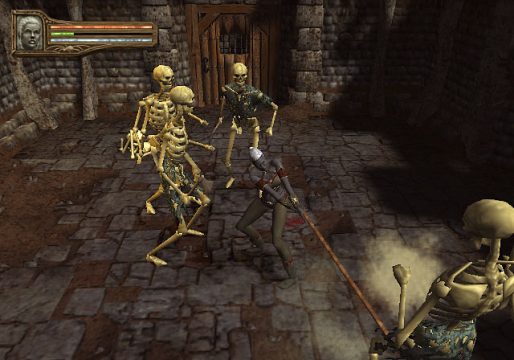 As mentioned previously, characters seem to get progressively overpowered in comparison to enemies as the game progresses, resulting in a pretty easy gaming experience. Dark Alliance II is pretty non-linear, however, with multiple quests available at any given time, so one can easily opt to tackle a slightly more difficult quest before polishing off the easier ones. Extreme Mode also offers a boost in difficulty, for any player brave enough to try it. Two unlockable characters are along for the ride to further enhance the title’s replayability. Completing the game once only takes 10-15 hours, but for those players who want to try out Extreme Mode with hidden characters, Dark Alliance II could easily take upwards of 50 hours.

With Baldur’s Gate: Dark Alliance II, Black Isle Studios has carried the torch respectably for Snowblind, who have moved on to bigger and better things with Champions of Norrath: Realms of Everquest. In most respects Champions is actually a stronger title, and fans of the first Dark Alliance might consider giving it a try before moving on to Dark Alliance II. The new adventure in Baldur’s Gate holds its own, however, and is an enjoyable gaming experience, especially for those playing in cooperative mode. For fans of Forgotten Realms and the world of Abeir-Toril, it may be sad news to hear that Interplay recently traded their rights to the Dungeons and Dragons name, so this will be the last Dark Alliance title to take place in the great port city of Baldur’s Gate.