Galdra Studios’ debut title Arcadia Fallen is a niche one, but it fits its niche nicely. It is solidly a visual novel first and foremost, but its choice system gives it an air of RPG as players can imprint a personality on their created protagonist. While a strongly written story performed by an experienced voice cast provides an engaging six-hour tale that serves as an enjoyable relaxant, there’s a feeling that other elements could have added much more to the overall experience.

Arcadia Fallen is set in a fantasy world dominated by the Empire. Following a previous war, the Empire has placed heavy restrictions on magic, with those capable of it placed under rules, scrutiny, and suspicion. Players control an apprentice alchemist in the small town of Anemone Valley. It’s not a trouble-free life as many of the townsfolk, despite making heavy use of their services, view the apprentice, their master, and the mage running the local flower shop with disdain. This suspicion becomes outright as events conspire to end up with the alchemist leaping to the defence of a spirit named Mime and become bound to them in the process, resulting in a subsequent chain of demon-related events that threatens the world.

The game is a bit less linear than most visual novels; progress is made by visiting different parts of the town to witness relevant events and converse with other characters as players prepare for each chapter’s main event. Players quickly manage to assemble a varied group of allies in their quest to stop the demon threat, including a demon hunter loyal to the empire and a renegade mage. Arcadia Fallen’s writing does a great job of establishing all of the important characters and their personalities early on, as well as having them develop and understand more about themselves over the course of its events. The growing bonds between all of the main cast members is a major part of what makes the story so enjoyable. 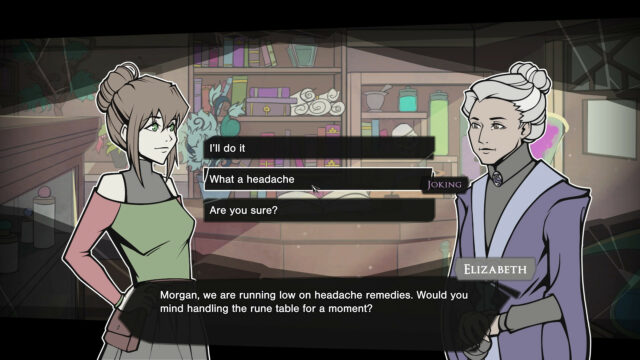 Most choices let players imprint their personality on the alchemist, while important story decisions are made obvious when they come up.

Being yourself is a major theme for Arcadia Fallen as this comes up in its choices, which let players imprint their own personality on the protagonist. It’s a welcomely inclusive game; players can choose from male, female, or neutral options for their pronouns and body type as well as two different voice options, with the four optionally romanceable characters available for all players. There are many conversational choices where players are given responses noted with an attitude, so it’s easy to play the protagonist as, say, a determined jokester, while important decisions are clearly marked along with their likely impacts. The system certainly helps players feel like it is their character and that they are part of the world.

The only downside to Arcadia Fallen’s attitude of giving players such control and information is that it means the peril of the story isn’t matched by player urgency. Players can effectively do no wrong, so it feels like they are coming along for the ride rather than the protagonist being responsible for the direction of the plot. There are still numerous important choices that have major impacts on the ending and where characters end up in the epilogue, which is pleasing to see, but at times it feels like the game is going out of its way to ensure players get what they want.

Outside of choices, players partake in rotational puzzles that double up for the alchemy and pseudo-combat against demons. With alchemy, players input ingredients into four overlapping circles and spin them around until the middle circle has the desired combination of symbols. When defeating demons, players are presented with another set of four circles and need to match the pattern displayed. The alchemy system and non-linear inter-chapter structure allow for a few sidequests, which provide more story content as well as a few additional choices during the game’s final sections. There’s no price for failure in either system; players can simply keep trying until they get things right. It would be nice if there was more to the alchemy system and if there was any usage for most of the potions created, even if only in throwaway event scenes, but they mostly exist just to fill a checklist. 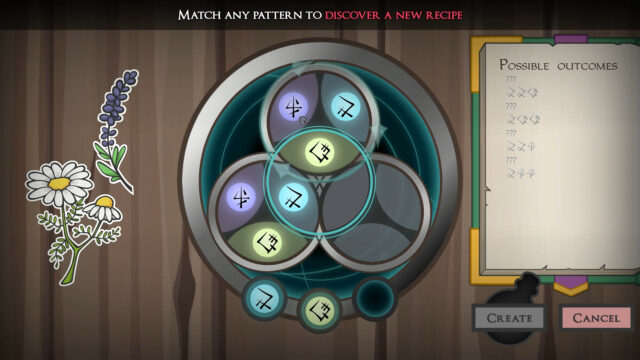 The only gameplay other than event choices consists of rotational puzzles for making potions or defeating demons.

Arcadia Fallen’s visual style is straightforward but pleasing to look at. Its presentation is consistent, with a unifying colour palette, while the different character portraits are emotive. It doesn’t strive to be an ambitious visual treat, yet its aesthetic elements are complementary and quite pleasing, though some of the special icons present in the alchemy puzzles are subtle enough that it can be hard to differentiate them from the regular ones.

The voice acting, added as a stretch goal from its Kickstarter funding campaign, features a highly talented and experienced cast including Allegra Clark, Joe Zieja, Erica Lindbeck, Sean Chiplock, and more. The performances are strong across the group and put an impactful oomph into the writing. The counter to this is that with budgetary constraints, a good percentage of lines are not voiced and end up lacking the same level of interest and impact. While there isn’t a large number of tracks, the music plays its part in making players feel welcome in the world.

There’s an audience that will be very appreciative of what Arcadia Fallen achieves. It gives players a pleasing opportunity to play themselves as they see it in another world and characters that welcome them for who they are. The game won’t be for those who like to be involved in their character’s actions, but for those wanting a relaxing visual novel, it certainly fits the bill.