The previous games in the Arc the Lad series have been tactical RPGs, but things are different this time around. Arc the Lad: End of Darkness branches out in the opposite direction as an action RPG centered around an exorcist named Edda. After awakening his power to exorcize evil spirits called malademons, he leaves on a worldwide journey to share his talents.

Of course, in order to exorcize his foes, Edda must defeat them first. In order to fight enemies off, he can hit them continually or do a quick and powerful combo that will knock them down, stun them, and leave them temporarily invincible. Some of the more powerful enemies can be very difficult to stun, though. Edda also has the ability to dash or jump backwards depending on the direction the control stick is held. This allows him to slam into enemies, run past them, or jump out of the way. Other abilities such as magic can be used, but they must be purchased and equipped, and he can only carry four skills at once.

All abilities, equipment, and characters except Edda are contained within cards. While it is possible to use the heroes from the other Arc the Lad games, they must be found and materialized before they can be chosen. Unlike most RPGs, characters do not gain levels; they receive power only from the cards they equip. The closest thing the game has to an experience level is the characters’ hunter rank which determines the level of skills they can use and how many times they can use them. Most heroes can increase their hunter rank by absorbing the SP that Edda gains when he exorcizes malademons, but Edda’s rank will only increase as he completes missions. 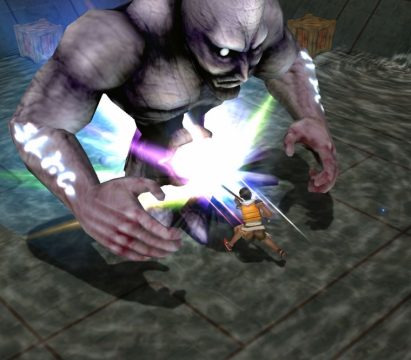 As base statistics and cards are the only thing that really determine a character’s strength, everyone will increase only marginally in power as the game progresses. This not only makes missions very easy, it also makes it possible to skip to very high mission ranks very early in the game without too much difficulty. This allows the player to gain absurd quantities of money for purchasing powerful cards. All things considered, the game is quite easy. The only thing that occasionally makes things difficult for the hero is the play control.

While the play control isn’t exactly bad, it can cause a few problems in certain situations, especially while locked on to an enemy. The largest problem arises from the fact that the same button is used to ram the enemy, dodge enemy attacks, and run to the side. If the angle of the control stick is off even slightly while locked on to an enemy, it can cause Edda to run right into an enemy attack when the intent was to dodge it. Speaking of problems with locking on, it is also very difficult to cancel a lock without defeating all of the enemies in the vicinity. Locks also remain shortly after an enemy is defeated, and, for some reason, it isn’t possible to switch targets sometimes. Luckily, all of those problems can be solved by simply not locking on to enemies. The only other major flaw occurs in the menu. For some reason, some screens display character statistics in letters instead of numbers. This can make it difficult to see the effects of a piece of equipment without bringing up detailed information of it elsewhere.

In addition to promotion exams Edda must take in order to increase his rank, there are two types of missions: those that result in a nice sum of money and those that advance the storyline but yield no reward. Any hero that has been materialized can participate in the non-storyline missions that vary from protecting sheep to hunting down ninjas. Some of these may sound interesting, but many of them are pretty much the same, just with slightly different conditions and different enemies. There are a few good missions here and there, but playing them over and over in order to avoid the bad ones can get a little old too. Storyline missions at least result in small story fragments to mix things up, but some of the areas associated with them are much longer and less interesting. 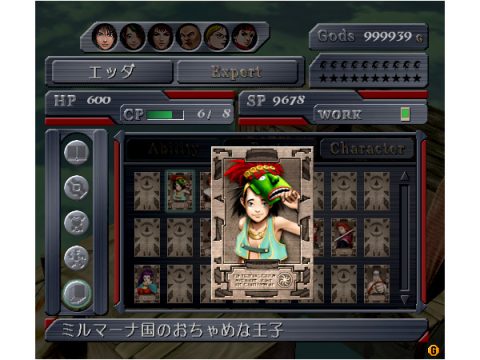 While these missions may result in advancing the plot, the storyline is somewhat weak to begin with, though the localization is decent. There are only about a dozen story missions and some of them have only weak ties to the central storyline. It isn’t until late in the game that the fragments begin to come together, though the game isn’t particularly long to begin with.

If only the minimum number of missions are played, the entire game can be completed within roughly twelve hours. Should the player wish to do every mission, collect excessive amounts of money, and play with the rudimentary card synthesis system, they can expect to double that. It is also possible to play missions online with friends to add some extra play time, though most missions aren’t very good to begin with.

Though it varies greatly from its predecessors, it features very little that hasn’t been seen elsewhere. Card equipment systems and synthesis shops have been around for ages. It also relies heavily on nostalgia and cameos from characters in previous Arc games. While it is original in the series, it’s a largely unoriginal game overall. It even reuses much of Arc the Lad: Twilight of the Spirits‘ visuals and soundtrack.

Though both the visuals and music are borrowed, there’s a large difference between reused graphics and using the same music again without bothering to remix it. While the music itself certainly isn’t bad, those who played through Arc the Lad: Twilight of the Spirits will probably already be tired of it. The quality of the sound effects is pretty good, though the voice clips of certain characters can become a tad annoying after a while due to a lack of variation.

Despite numerous other shortcomings, Arc the Lad: End of Darkness features some very nice visuals. While many characters, enemies, and places are taken out of Arc the Lad: Twilight of the Spirits, that is expected in sequels and there are several quality additions too. While not the best out there, the graphics are still very good, especially the massive boss enemies.

Arc the Lad: End of Darkness tried something new in order to bring new life to the series, but it failed. Despite the fact that it is an action RPG, battles are still generally as slow as those of average tactical fare and feature below average play control. Most of the missions are very similar in nature and there is only a weak central story to accompany them. The card synthesis system helps decrease to monotony and there are a few decent missions here and there, but they aren’t enough to make up for the numerous shortcomings. Serious Arc fans may enjoy the nostalgia, but the game itself is well below average.