The Merry-Go-Round Broke Down

Considering its many faults, improving upon the original Albert Odyssey shouldn’t have been very difficult for Sunsoft to do. Somehow this seemingly simple task was insurmountable, however, because Albert Odyssey 2 achieves the unlikely goal of making its predecessor look good in comparison. The Mode 7 spinning has been axed for this installment, but almost every other change is for the worse, creating a game of endless frustration and infinitesimal reward.

The plot of the first Albert Odyssey was relatively inconsequential, and while the sequel increases the screen time given to supposedly dramatic events, the result would not be impressive even if the game had a translation. The ending of the first game showed that the villainous Globus had not been defeated, and Albert Odyssey 2 makes clear that he’s still up to nefarious activities ten years later. Globus doesn’t figure into the narrative much for a while, as instead a kidnapped princess Yuna is rescued, then kidnapped again. This game’s hero, Dean, makes it his mission to get her back, and most of the game consists of wandering around the world to accomplish that. Though there is no translation of the events transpiring, any RPG veteran will have no difficulty understanding what is occurring due to its clichéd-even-in-1994 nature.

Albert Odyssey 2 keeps the hexagonal movement and attack structure of its predecessor, making for an unusual interface by the standards of tactical RPGs. Just like the first game, the interface doesn’t seem to sync very well with the Super Nintendo controller, though the problem is far worse here. In cramped areas with locations rendered inaccessible due to terrain factors, the cursor is often extremely reluctant to land at the intended spot, forcing the player to try various roundabout means of getting the uncooperative mechanism to go where it is needed. To say that this is aggravating understates matters, and turns a sometime annoyance from the first game into a constant source of rage here.

A big difference from the preceding game comes in the form of attack accuracy. What was consistently 100% in the original title has become highly variable in the sequel, to the point where even spells have a high probability of missing their targets. Though the odds behind attacks landing are roughly balanced between the protagonist’s forces and the enemy, this game’s random number generator seems to play unfairly and make the opposition more likely to hit even when the percentages don’t support that. This sort of accusation is difficult to empirically support, but the sheer number of times player attacks with hit percentages in the high eighties miss, and the enemy attacks with odds in the forties land home, makes the feeling of being suckered unmistakable.

Far odder is the inscrutable methodology behind the actual attacks. Generally a character on the attack will strike twice, but sometimes not. The double attack is usually interrupted by the possibility of the opponent counterattacking in between the two strikes, but the rationale for when this happens is always hidden, turning the entire process into a source of constant frustration. Even when both attacks are launched, for some reason one strike often does far more damage than the other, but without any apparent pattern behind it.

Aside from this unpleasant structure for basic attacks, characters have skills and magic to use against the foe. Unlike the first Albert Odyssey, this game uses the standard system of MP for initiating those abilities, and doing so is a grievous error. Though having the entire world be one gigantic battlefield has been abandoned in this game, the number of foes that must be defeated still requires quite a bit of effort, and the pitiful number of magic points assigned to each character makes this unpleasant. While each ability only costs a single magic point to use, when the sum of a character’s MP can often be totaled using one hand, that’s a problem. 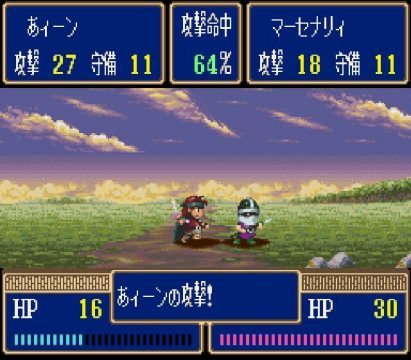 Aw crud, the hero’s lost a lot of HP. Be prepared to have him die and walk back to this point because of that.

Another problem comes from the terrain. In the first game, movement was slowed when traversing rough ground, but it was compensated for by the growth of that statistic as characters gained levels. Here there is no such ameliorating factor, and when characters can move just one or two steps on battlefields with multiple flying foes, the sensation players will feel is definitely not one of pleasure. To exacerbate the movement problems, for some reason the game severely curtails the distance characters can travel whenever they’re close to an enemy, which makes already-cramped battlegrounds even more unappealing.

Like the games in the Shining Force series, Albert Odyssey 2 institutes the mechanic of the leader’s defeat tossing the player back to the last save point minus half of the party’s money. Nothing Camelot ever touched in the tactical realm is as stupidly infuriating as Sunsoft’s creation, however, when it comes to the death of the leader. Dean is not a terrible character, but enemies are alarmingly good at hunting him down and killing him with just a couple of hits, in some instances knocking him out in a single lucky strike. This means two strategies can be employed: either accepting that Dean will constantly die and doing as much damage to the opposition as possible before that occurs, or trying to have him hide in a corner while his allies fight. Neither option is particularly pleasing as a means of tactical conduct.

Dean’s proclivity towards frequent death would make the game unbearably frustrating if it used most standard tactical models, but Albert Odyssey 2 does incorporate another feature of its predecessor that makes incremental progress possible. Instead of the enemy forces resetting upon defeat, whatever adversaries the player managed to slay will stay dead, enabling the winning of a gradual attrition war. The exception to this comes in the form of battlefields that have been completely cleared, and which the player will have to tramp across more than once due to the paucity of save points, because a few opponents will randomly appear in these areas after the battle has been seemingly won. The utility of this feature is that it enables endless grinding, though the scattered locations of the few resurrected enemies and the time required to track them down makes this an exceedingly inefficient means of experience gain. The problem becomes even more pronounced once Yuna joins late in the game at level one, and since every character is always deployed the need to turn her into a useful combatant at that point is undeniable.

Grinding may be necessary, via whatever inefficient means the game provides, but individual levels don’t make a huge difference. In particular, characters gain very few HP with each level, and most of the time the MP stat does not increase at all. Since a single level doesn’t help much, and all abilities a character can use are accessible starting from level one, only a sustained grinding effort will make any difference in the durability of the party. It won’t help much against the unexpectedly powerful and lucky hits the enemy will get, but is nevertheless necessary. All the traipsing over old ground while grinding inefficiently manages to turn Albert Odyssey 2 into a game that will probably require over forty hours to finish, much of it spent seeing the same scenery. Not helping matters is the presence of certain enemies with the ability to revive slain opponents in large numbers, which will force the player to spend even more time on clogged fields with antagonists that must be killed repeatedly en route to their resuscitators. 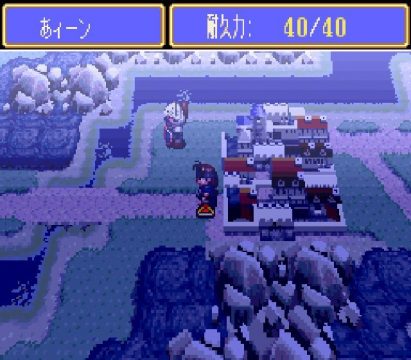 40 HP will remain a significant part of every character’s life force for the whole game.

Aside from being too dark in every indoor dungeon, and using an egregious amount of palette-swapping for the enemies, the visuals are okay. For late 1994 on the Super Nintendo the graphics are unimpressive, with the major unique touch being that spell animations change as characters reach higher levels, but they’re not particularly ugly, just uninspired. Still, for this period of the system’s life, the visuals are hard to excuse.

Naoki Kodaka learned a few things from the first Albert Odyssey. There is quite a bit more variety in the score of its sequel, which is welcome considering the many times players will visit the same locales. Unfortunately, while the towns generally are pleasant to the ear and a couple of battlefields match that standard, too many combat themes are boring upon the first listen and grating when heard after that. The good stuff is enough to elevate the overall sound to a mediocre rating, since the sound effects are unremarkable and do not intrude upon the experience.

Due to its lack of a translation even with the help of the internet, no mass audience has ever investigated either Albert Odyssey or its sequel. The first game had manifold problems, to be sure, but Albert Odyssey 2 makes the original look like a masterful piece of software. Sunsoft’s developers somehow created one of the worst tactical games ever made, and in the likely event that the internet’s denizens someday translate this title, the absolutely wretched nature of it will be experienced by more people. Considering how this game rewards players by providing great incentive to curse more creatively, the completely different style of game Albert Odyssey: Legend of Eldean on the Saturn is the best thing ever to happen to this series.