Mario + Rabbids: Sparks of Hope Gets Some DLC Details

Ubisoft provided some details on its post-launch DLC plans for Mario + Rabbids: Sparks of Hope. Three DLC releases are planned, with all three included in the game’s Season Pass, which is available separately or as part of the game’s Gold Edition.

The first DLC is titled The Tower of Doooom and is planned to launch in early 2023. It sees Madame Bwahstrella tasking Mario, Rabbid Peach, and their allies with cleaning her multi-dimension tower and saving Spawny. The second DLC is set to launch in mid 2023 and sees players travelling to a new planet with new characters, secrets, and enemies. The third DLC introduces Rayman as a new playable character, who will join for an additional adventure. The Tower of Doooom will only be available to those who have the Season Pass, while the other two DLC will be available to purchase separately.

Mario + Rabbids: Sparks of Hope released for Nintendo Switch in October 2022. The game sees Mario and his friends teaming up with the Rabbids to stop an entity called Cursa, which is consuming energy from the Sparks — fusions of Lumas and Rabbids — and plunging the galaxy into chaos. Players control a team of three members selected from nine playable characters, travelling from planet to planet to free them from Cursa’s influence. 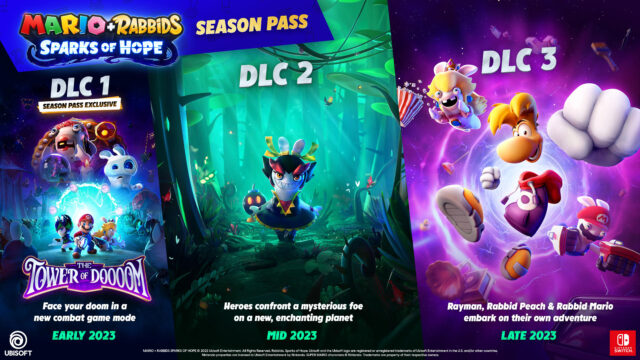