The Karakuri crafting system looks like it will be a strong differentiator that will make the game stand out, along with the distinct visual style and designs.

Koei Tecmo and Omega Force have unfinished business in the hunting action RPG sub-genre. Although their previous Toukiden titles were decently received, they never really took off and challenged Capcom’s dominant Monster Hunter franchise. In order to help get widespread appeal, the developers have partnered with EA and its global expertise under its EA Originals label for the flashy new title Wild Hearts, which is very much its own thing. Ahead of the game’s release in February, RPGamer was given the opportunity to attend a special press briefing to learn more about the game and the features its developers hope will get it to stand out.

Wild Hearts is set in the world of Azuma, which is inspired by feudal Japan. The world is beset by magically-infused beasts known as Kemono, whose presence is changing the land. Players create their own character and are tasked with restoring the balance of nature by taking on hunts in parties of up to three hunters. Few details have been given about the story and how big of a role it will play, making it the game’s biggest unknown at this stage. EA did state that the core story is expected to take most players around 30 hours to complete, with plenty of additional optional content. 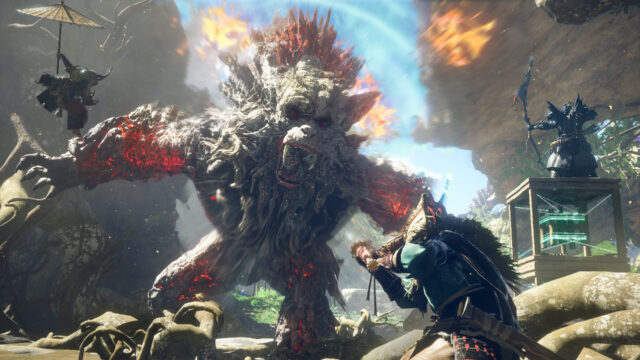 The game has the traditional cycle one would expect from the sub-genre, with players obtaining materials to craft more weapons and armour to go on more challenging hunts. However, its main differentiator comes in the Karakuri, tools built upon ancient technology that only players are able to utilise. This brings a major element of crafting to hunts, as players can build these Karakuri to help them fight or get around the large open zones.

Karakuri start out with the basic crate, torches, and glider, which can contribute effectively on their own. However, these building blocks can be combined to create much more powerful fusion Karakuri, such as traps. There are also major Karakuri that are substantial machines in their own right, such as zip-lines, camps, and human catapults. As players experiment and complete hunts, they can unlock a wider variety of Karakuri to ensure they have an arsenal for almost any situation.

Wild Heart’s multiplayer will allow players to play through the entire game together, including cutscenes and sidequests. It also features drop-in multiplayer, with players able to join forces at camps. Players hunting in the open world can open up their world map and select a specific Kemono to target, which will start a matchmaking process, during which players can start the hunt while they wait for allies to arrive. Loot is granted individually to each player, and the game will have dynamic difficulty scaling based on the number of players, as well as full cross-play across all platforms. 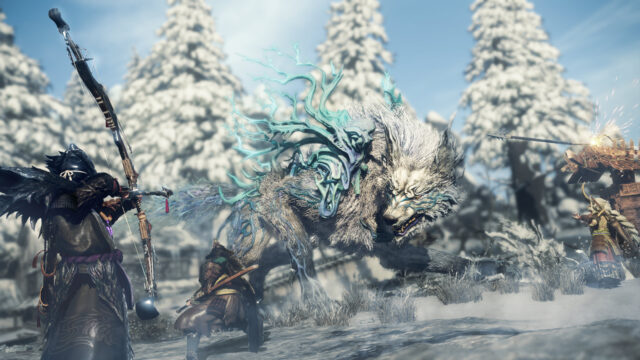 The game will come with eight distinct weapon types — including bow, katana, and umbrella — with over 200 variations in total, and each has its own individual set of combos as well as unique combos with the Karakuri. There are also customisation options — plus a trans-mog system — for the various pieces of armour, with players able to make them look more Kemono-like or more traditionally human armour. Players are able to jump and grab onto any Kemono, where they can try and expose or exploit weak spots, with the game using a stamina bar to determine how long they can how on for.

The game’s world is divided into four large areas, each based on one of the four seasons. The spring stage of Hanagasumi Hill surrounds a giant cherry blossom tree, summer has the secluded and vibrant Starfall Island, the Scarlet Canyon of fall is covered by coloured leaves, and winter’s Frozen Moon Castle takes the form of a giant fortress that has been split clean in two by a giant Kemono before being frozen in ice. All of these areas can be reached from the game’s hub city of Minato. Here is where players will do most of their upgrading and crafting, while helping its citizens and looking to build Minato back up to its prime. 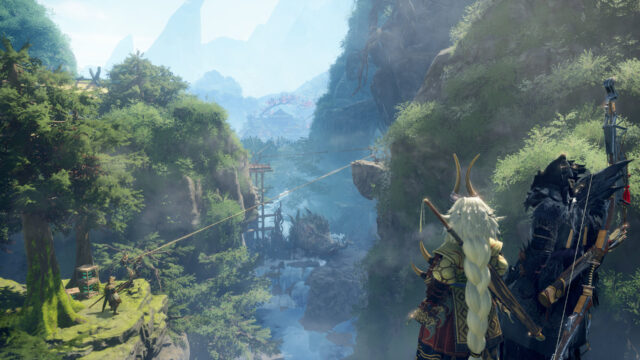 The Kemono designs feature an intriguing mix of beast and nature and are all appropriately memorable and fearsome. The animations are crisp and the environments certainly stand out from a base view; it’s hard to judge how easy it is to get around and find one’s way, but the world map and ability to locate Kemono on it should prevent too many issues. From the footage shown, the game looks fair in that it gives good visual warning when a powerful attack is coming, letting players react to it.

Fans of the hunting action RPG genre certainly should put Wild Hearts on their radar. The Karakuri crafting system looks like it will be a strong differentiator that will make the game stand out, along with the distinct visual style and designs. There are sure to many new and veteran hunters ready to take on the Kemono when Wild Hearts releases for PC, PlayStation 5, and Xbox Series X|S on February 13, 2023.