Limited Run Games announced that orders for physical Nintendo Switch copies of action RPG ANNO: Mutationem will begin on Friday, October 21, 2022. The game will be available via Limited Run Games’s online store in a $34.99 standard edition and a $64.99 Deluxe Edition that also contains a 18″ x 24″ poster, a keychain, and a soundtrack CD. Orders will be open until November 20, 2022.

ANNO: Mutationem takes place in a cyberpunk setting and uses 3D environments with pixelated 2D characters. The game follows Ann Flores, supported by her hacker friend Ayane, as she looks for the whereabouts of her brother. It originally released for PC, PlayStation 4, and PlayStation 5 in March 2022, with the Nintendo Switch version released digitally in September 2022. Those looking to read more about the game can check out RPGamer’s review of its initial PlayStation 5 release. 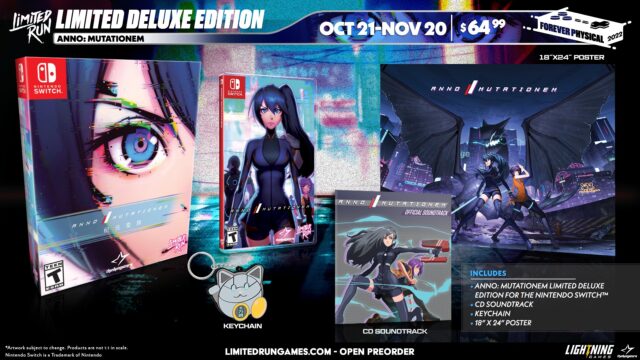